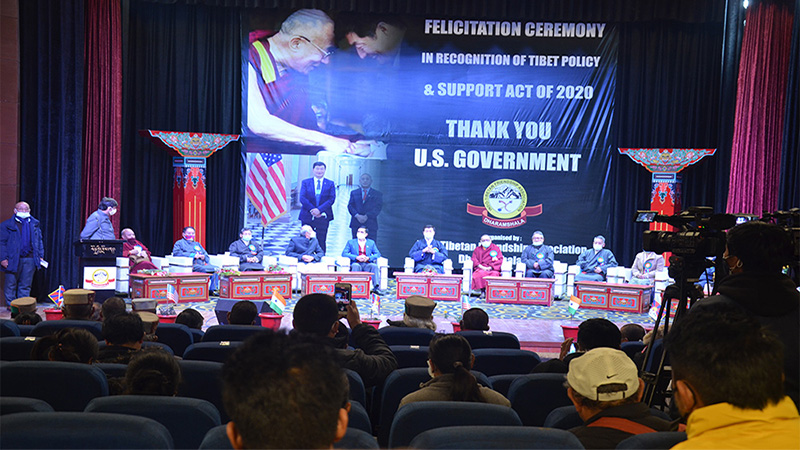 A felicitation ceremony was held in at the auditorium of Tibetan Institute of Performing Arts (TIPA) in recognition of the Tibetan Policy and Support Act 2020 (TPSA) on January 16, 2021. Photo: TPI/ Yangchen Dolma

Dharamshala, India — A felicitation ceremony organized by the Indo-Tibetan Friendship Association (ITFA) in Dharamshala. This ceremony was organized in recognition of the Tibetan Policy and Support Act 2020 (TPSA) which was passed by the US Senate and later signed by President Donald Trump into law.

The Ceremony was held at the auditorium of Tibetan Institute of Performing Arts (TIPA) on January 16, 2021. Dr Lobsang Sangay, Head of Central Tibetan Administration (CTA) attended the ceremony as the Chief Guest along with the Guests of honor- Pema Jungney, Speaker of Tibetan Parliament in Exile (TPiE)) and Sonam Norbu Dagpo, Chief Justice Commissioner of the Tibetan Supreme Justice Commission (TSJC)) to celebrate and show gratitude to the US government for legalizing the TPSA 2020 into a law. The other guests included Deputy Speaker Acharya Yeshi Phuntsok of TPiE, Mr Ajit Nehria President of ITFA, Mr Ajay Singh Mankotia, former President of ITFA, Mr Onkar Nehria, Deputy Mayor of Dharamshala Municipal Corporation, Mr Subhash Nehria, ITFA’s Advisor, Ministers of respective CTA Departments and heads of various governmental and non-governmental organizations.

The ceremony commenced with the Tibetan tradition of serving tea and sweet rice and a welcome speech by ITFA President Mr Ajit Nehria, followed by the guests.

Mr Subhash Nehria, Advisor, ITFA talked about the Chinese oppression of the Tibetans, exploitation of its resources and China’s constant efforts of invasion in India. He addressed the benefits of TPSA 2020 and how it will contribute to strengthen the Tibetan struggle for freedom. “That day is not very far when the leaders of China will approach His Holiness the Dalai Lama and the Tibetan Government to help them improve their relations in the world,” said Mr Subhash Nehria while expressing his delight over the TPSA 2020.

“Indians residing in Dharamshala are very lucky to get the blessings and guidance of His Holiness the 14th Dalai Lama from time-to-time. He is a precious jewel for India. I urge the state MPs to raise their voice in the parliament for the conferment of Bharat Ratna to his Holiness the Dalai Lama by the Indian Government. This will send China on a back-foot diplomatically,” he added.

“After China captured Tibet, it was the Tibetans that faced the most amount of loss, followed by India and other nations sharing the border such as Nepal and Bhutan. The Chinese foreign policy of the Five Fingers of Tibet includes Ladakh, Nepal, Bhutan, Sikkim and Arunachal Pradesh. In addition to all these places, we should not forget that border encroachment also happens in Himachal Pradesh. The issue of India’s security is linked with Tibet’s autonomy. These problems will continue until Tibet gains genuine autonomy” reminded Dr Lobsang Sangay, the President of CTA. He also expressed gratitude to the soldiers for protecting the border in extreme conditions.

“I went to the United States for 7 weeks to get the TPSA Bill passed before the Congress term expired. I had to change 22 flights, which was a risk in the covid-19 pandemic. I have a 98% chance of survival if I contract the virus but a Tibetan protesting or self-immolating in Tibet does not have that 98% chance, hence I must carry out my political responsibilities without fear,” explained the political leader of CTA while addressing about his endeavour to pass the Bill. He added that his safe journey and the successful passing of the Bill was made possible by the blessings and prayers of His Holiness the 14th Dalai Lama.

“This success is not due to my efforts alone. It was the result of everyone’s collective efforts and blessings, especially the Tibetan people, the organisations and associations in America” mentioned Dr Sangay. He ended his speech by dedicating the Bill to the six million Tibetans residing in Tibet and thanking his cabinet for their good work.

With the help of a PowerPoint presentation, Dr Sangay elaborated on the procedure in the passage of TPSA 2020, its provisions and the main points of difference between the act of 2002 and 2020.

“An improved version of the Tibetan Policy Act of 2002, TPSA2020 makes it an official policy of the United States that the succession of the Dalai Lama and other Tibetan Buddhist leaders remain exclusively within the sole authority of the current Dalai Lama, Tibetan Buddhist leaders and the Tibetan people alone. Any interference by the Chinese government officials will be met with serious sanctions and be deemed inadmissible into the United States. It formally acknowledges CTA as the legitimate institution reflecting the aspirations of the Tibetan people around the world and Sikyong as the President of the CTA,” he elaborated.

“The bill also initiates new key provisions aimed at protecting the environment and water resources on the Tibetan plateau. It recognizes the importance of traditional Tibetan grassland stewardship in mitigating the negative effects of climate change in the region. In addition, it calls for greater international cooperation to monitor the environment on the Tibetan plateau and encourages American citizens and companies engaged in business activities in Tibet to practice corporate social responsibility while adhering to the UN Guiding Principles on Business and Human Rights,” he concluded.

It was announced during the ceremony that the ITFA will be completing 25 years of its inception and is all set to celebrate the silver jubilee later this year. The ceremony also included vibrant cultural performances of Gorkha dance and Jhamkada, folk dance of Kangra, Himachal Pradesh.

Ram Swaroop, Advisor of ITFA narrated a few instances before he concluded the felicitation ceremony. “Earlier, in the medical colleges of Himachal Pradesh, all the 60 seats were reserved for Himachalis. Now, here we are, having five seats in medical colleges reserved for Tibetan refugees,” he affirmed.