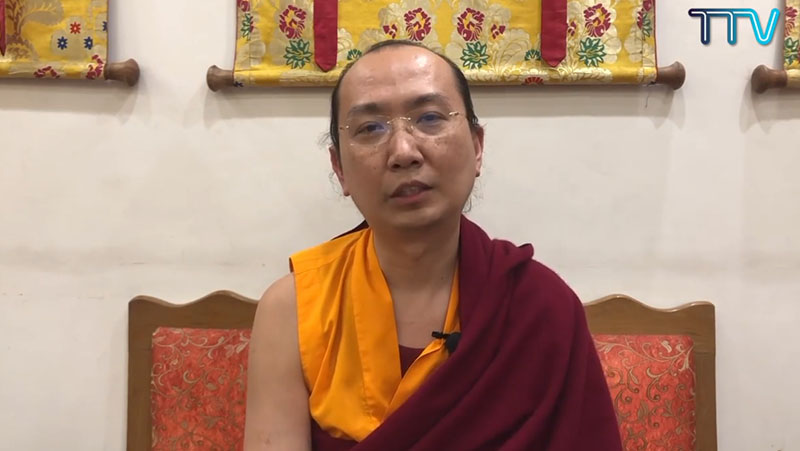 Dharamshala,India — His Eminence the 42nd Sakya Trizin, Ratna Vajra Rinpoche affirms that the legacy of His Holiness the 14th Dalai lama is not only beneficial to Buddhist practitioners alone but to the entire world while addressing the significance of the Tibetan spiritual leader’s four principal commitments on December 6, 2020.

The Central Tibetan Administration (CTA) dedicates 2020-2021 as the year of gratitude to His Holiness the 14th Dalai Lama as he turns 85 this year. The event aimed to show appreciation for his achievements, dedications, and contributions to the wellbeing of all sentient beings and the promotion of world peace.

The head of the Sakya school of Tibetan Buddhism, Sakya Trizin Rinpoche speaks on His Holiness the Dalai Lama’s four principal commitments, which are the promotion of human values, promotion of religious harmony, preservation of Tibet’s culture and environment, and revival of ancient Indian wisdom, as part of a week-long pre-recorded talk series organised by Department of Information and International Relations (DIIR) under CTA virtually.

“We, as the followers of this legacy believe His Holiness’s eternal relevance as the supreme head. As such, we need to do more than simply vesting our faith, we need to wholeheartedly practice his teachings and fulfill the four commitments for us to attain true benediction”, Rinpoche stated.

Emphasizing the significance of each of the four commitments, Rinpoche stresses that the responsibility in fulfilling them is not just His Holiness’ alone but the collective duty of everyone to fulfill alongside His Holiness the Dalai Lama keeping in mind that any of it has little to do with religion.

“Human values are not rocket science as it essentially means compassion, kindness, and forgiveness”, says Rinpoche while speaking on first commitment. He further mentions that much of the crisis facing the world today is man-made due to a lack of human values and that the only way to counter the crisis is to develop and enhance ethical values.

Rinpoche further adds that laying the foundation for religious harmony is the sole responsibility of the spiritual heads. Rinpoche continues that each individual should do their bit in the preservation of the Tibetan language and culture which forms the basis of Tibetan identity, focusing on the third commitment.

The vast and rich knowledge of ancient Indian wisdom is highly significant to resolve the problems of the modern world, further emphasizing that this knowledge must be revived at all cost and it should be done through education and secular means, His Eminence the Sakya Trizin Rinpoche conveys while discussing the fourth principal commitment.

Under DIIR’s initiatives, the week-long virtual talk series on the four principal commitments of the Tibetan religious figure will be partaken by 120 speakers from 19 countries across the globe speaking in 15 different languages starting on 4th to 10th of December, 2020. It will include addresses by various Tibetan religious heads and followed by remarks of scholars, professors, monks. nuns and other important figures.

Eminent key-speakers including Kyabje Menri Trizin Rinpoche, head of Yungdrung Bon, Kyabje Gaden Tripa Rinpoche, the head of Gelug school of Tibetan Buddhism, Dr Thupten Jinpa, Kalon Ven Karma Gelek Yuthok, Geshe Lhakdor, and Geshe Ngawang Samten each discussing the key aspects and contents of the four life-long commitments of His Holiness the Dalai Lama of Tibet in a brainstorming session has been the highlight of the talk series.