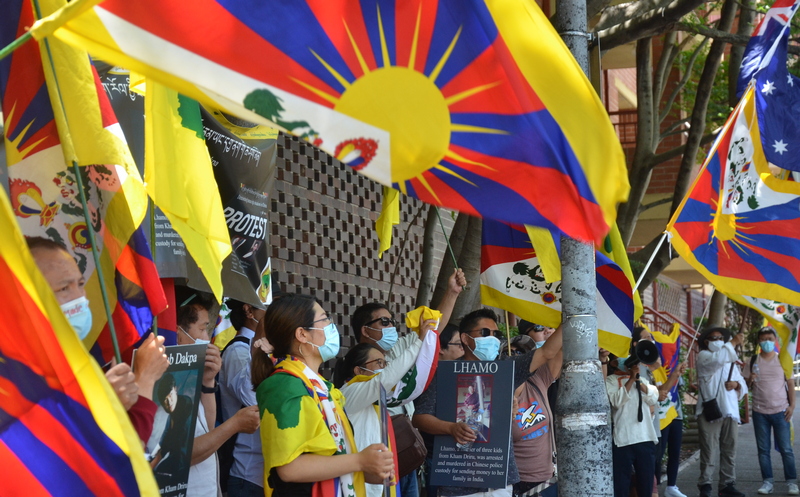 Nearly 100 Tibetans gathered at the Chinese Consulate in Sydney on November 20 to protest the genocide and persecution of Tibetans by the Chinese Communist Party in Tibet Photo: TPI

The Regional Tibetan Youth Congress of Australia gathered nearly 100 Tibetans in front of the Chinese Consulate in Newtown, Sydney at 10:00 a.m on the 20th of this month. They held up the Tibetan flags, banners, placards, and pictures of the three Tibetans who were tortured, arrested, and sentenced in Driru County, Tibet, chanting slogans such as "Free Tibetan Political Prisoners", "Free Tibet", "Stop Threatening Australia", "Stop the Genocide in Tibet", "The Coronavirus is Made in China", "Wake Up UNO" etc, condemned the Chinese Communist authorities for their escalating human rights abuses and persecution of Tibetans, and called on world leaders and peace lovers to support Tibet.

In June of this year, Lhamo, a mother of three children from Driru County in Tibet, was forcibly taken away by police, claiming that she was sending money to relatives in India. Previously, her cousin Tenzin Tharpa, who had helped her send the money, had been arrested. For the next two months, Lhamo was tortured in prison, suffered severe physical damage, and was rushed to the hospital, where she died two days later. In addition, Lhundhup Dakpa, a singer from Driru County was arrested last May, but in June of this year, he was sentenced to six years in prison on charges of "singing reactionary songs and inciting separatism".

1. Small countries and ethnic minorities bordering China are still suffering from a series of discrimination and threats from the Chinese government, and CCP should immediately stop its disrespectful and abusive behavior towards these areas and their people;

2. CCP should treat Tibet as a historical and purely independent country and acknowledge its crimes of occupying Tibet since 1959, killing over one million Tibetans, and destroying over six thousand monasteries. The Chinese side should publicly apologise for this; and

3. 155 Tibetans have spontaneously self-immolated in Tibet since 2009, and the Chinese government should immediately cease its use of violence and inhumane abuse against them in the places where these self-immolations took place and against the relatives of those who have self-immolated since then. In addition, the Chinese should immediately release the thousands of patriotic Tibetans who continue to be detained and tortured in Chinese prisons because they continue to peacefully protest against the illegal invasion and forcible suppression of the Tibetan state and people and stop their persecution.