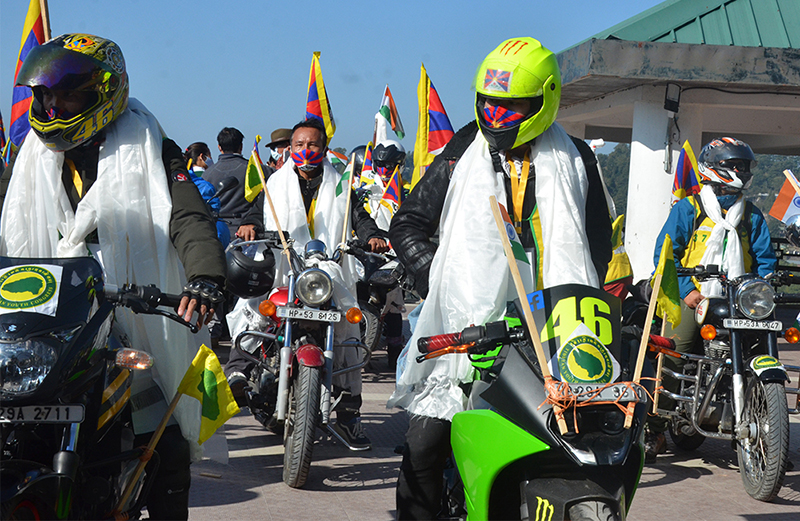 Dharamshala, India— A total of 50 bikers are part of the Indo-Tibet border rally initiated by Tibetan Youth Congress (TYC) kick-off on November 18, 2020.  Protesters demand international communities to pay more attention to the situations in Tibet under Communist China.

“This rally is also a reminder for our brothers and sisters inside Tibet that no matter how brutal our oppressor Communist China is, Tibetans across the world haven’t given up and dispirited yet. Generation changes, we will continue to fight and walk forward for our cause”, declares Gonpo Dhondup, President of the TYC.

He further calls out international communities to pay more attention to the situations in Tibet under Communist China. The lack of Human Rights in Tibet and violation in every part of Tibet since 1949. The recent death of Lhamo, 36 and detention of her cousin Tenzin Tharpa and singer Lhundup Drakpa are examples of lack of religious freedom and expression, he explains. It is a high time for the people of the world to see the true colour of China. It’s irresponsibility in the handling of the Wuhan Virus and making the whole world pay a huge price. For jeopardizing the world economy. For causing the deaths of 1.26 million world population and 50 million infected and still on rise, he observes.

A long time Tibet supporter, Member of Indian Parliament, Sri Kishan Kapoor is the chief guest at the Send-Off ceremony. Acharya Yeshi Phuntsok and Mr Pema Jungney, the Deputy Speaker and Speaker of Tibetan Parliament-in-exile respectively grace the occasion with their eminent presences. A number of representatives from well-known Tibetan NGOs are also part of the gathering to wish safe journey for the bikers. Many Tibetans and well-wishers come to see off the bikers with Tibetan ceremonial scarves and slogans of ‘Long Live Tibet’, ‘Tibet’s Independence, India’s security’. The riders gallantly take the road with Tibetan and Indian national flags waving high on their bikes amidst the cheering crowds.

The participants will drive from McLeod Ganj, Dharamshala till Indo-Tibet border, Kinnaur, Sikkim Northeast, India. The bikers include members from seven regional TYC units, Rohtang Riders, nurses, mechanics and organizers, a total of 65 people are part of the rally. The riders will drive for three days from McLeod Ganj, Dharamshala till Indo-border Kinnaur, Sikkim, Brahmaputra which has a historical significance to both India and Tibet. It will take six days for the round trip.

TYC, through this Indo-Tibet border Bike rally aims to achieve three main demands which include;
• Make China accountable by boycotting products made in China.
• To encounter and control China’s illegal intrusion on Indian soil. Tibet’s Independence remains the only viable solution.
• To release all imprisoned political prisoners of Driru County unconditionally.

“Situations are extremely difficult inside Tibet. I am not sure whether my participation in this bike rally will directly help or not but it gives me a feeling that I am doing something for my country. The use of the Tibet border on TYC’s pamphlet gives me a very unique feeling”, says Phurpa Dorji, a participant from Dharamshala when asked his purpose for being part of this bike rally.

“As a Tibetan it is our responsibility to be part of this rally and secondly to solve disputes at the Indo-Tibet border because of China, recognition of Tibet’s independence is the only viable solution”, says Lobsang Jampa, another partaker for the rally from Dharamshala.

“It has been more than 60 years since our flight into exile and it is a way of taking my individual responsibility. Also, to highlight the deterioration situation in Driru and conflicts at the Indo-Tibet border because of China. As long as Tibet remains occupied under China, the conflicts will continue. The only viable solution is recognizing Tibet as an independent nation”, states Tenzin Mipham, a participant from Kullu Manali.