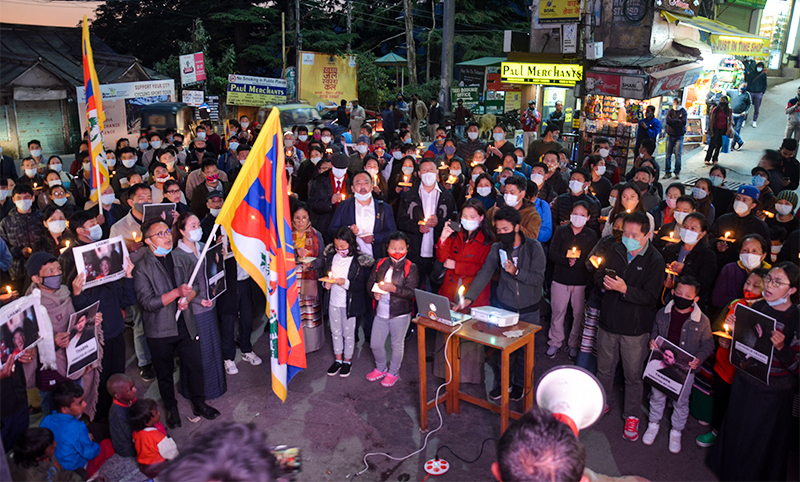 Dharamshala, India — More than hundreds of Tibetans and Indian supporters and friends marched the streets of McLeod Ganj, main Square in a candlelight vigil to shed light on the deteriorating Human Rights situations in Driru County, Nagchu in eastern Tibet, on 3rd November, 2020.

Following the brutal death of Lhamo, 36, a mother of three in Chinese custody recently and detention of her cousin Tenzin Tharpa for an unspecified prison time for allegedly sending money to relatives and other Tibetans in India.

“Through this candle light vigil, we want to seek the support of our local Indian friends, Indian government and international communities to pressurize the People’s Republic of China to release Tharpa, Lhundup and all the political prisoners without any condition” declares Gonpo Dhondup, president of Tibetan Youth Congress.

These incidents showcase the high vulnerabilities to which Tibetans are exposed under Chinese rule. The breach and violation of Human Rights seem to be at its peak let alone having any basic rights to live in Driru, one of the most restricted areas in eastern Tibet.

Five Tibetan NGOs, Tibetan Youth Congress (TYC), Tibetan Women’s Association (TWA), Students for Free Tibet-India(SFT) Gu Chu Sum movement association of Tibet and National Democratic Party of Tibet(NDPT) based in Dharamshala took the initiative. The Tibetan NGOs strongly criticised the Chinese government for inhuman persecutions of Tibetans in their exercise of freedom of speech and expressions. Also called out the immediate release of all political prisoners who are imprisoned without any fair trial or bases of convictions. The five Tibetan NGOs also seek the attention and support of international communities to highlight the intensive violations of Human Rights in Tibet on international platforms.

The deceased, Lhamo’s brother Tashi Dhondup in presence at the candlelit vigil states that he is pained and in despair in the sudden demise of his sister under the cruelty of Chinese custody and arrest of his cousin Tharpa and Lhundup whose composition of ‘Black Hat’ exposes the abuses of Human Rights in Tibet under China. He demands a clear investigation into the death of Lhamo and immediate release of Lhundup and Tharpa.