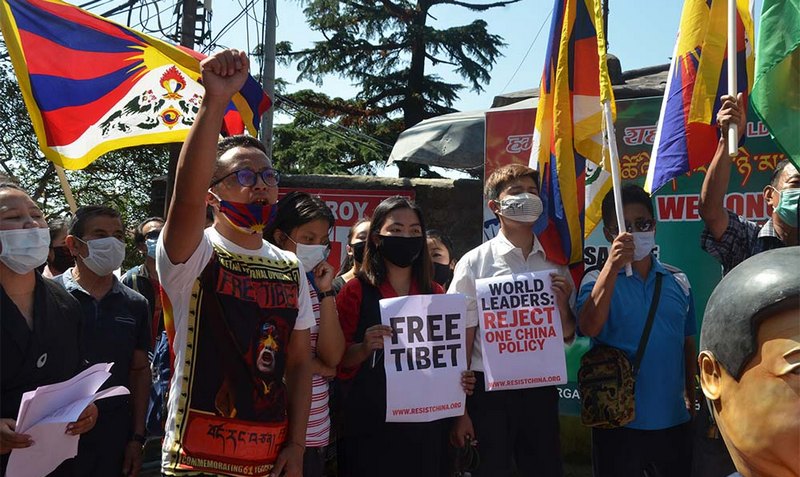 October 1 marks the founding day of the Chinese Communist Party's (CCP) 71 years of rule in China. Tibetan activists staged a protest in order to show the world what CCP had done to Tibetans, Uyghurs, Mongolians, Hong kongers, and Chinese people. The protest is organized by the Tibetan Youth Congress, Tibetan Women's Association, Students for a Free Tibet, Gu Chu Sum (ex-political organisation), and National Democratic Party of Tibet.

Tibetan activists staged a visual protest with effigies which labeled "China Lies, Tibetans Die" in Dharamshala on October 1, 2020, as part of Resist China's global day of action on the anniversary of the founding day of the People's Republic of China. Each body bag was placed to represent those who have died due to the Chinese Communist Party's brutal 70-year occupation of Tibet.

“On October 1, 2020, as the Chinese Communist Party (CCP) celebrates the founding of the People's Republic of China, hundreds of Tibetans, Uyghurs, Southern Mongolian, Hong kongers, and Chinese people are staging a Global Day of Action to Resist China. Protests are taking place in over 50 cities in 25 countries around the world, calling on governments to implement targeted sanctions against China and hold Beijing responsible for their egregious human rights abuses”, mentioned in their statement.

“The protest comes just days after new evidence was released by Professor Adrian Zenz-one of the world's leading experts on the situation facing Tibetans and Uyghurs and Chinese Communist Party rule - about a large-scale mandatory "vocational training" program that has seen at least half a million Tibetans face enforced indoctrination, intrusive surveillance, military-style enforcement, and further harsh punishments. Evidence disturbingly reminisce of coercive vocational training and mass labor transfers imposed by the Chinese authorities in East Turkestan”, it added.

“The CCP crackdown against freedom, democracy, and human rights has intensified beyond belief and governments must come together to take strong, joint, diplomatic action to send a clear message to China”, the statement concluded.

‘Since January, at least a million of Tibetans have been ripped from their homes and placed into forced labor programs. Evidence that Beijing is rolling out the militarised labor program in place in East Turkestan and in place as part of Xi Jinping's elaborate scheme to eradicate Tibet's language, culture, and identity" said Gompo Dhondup, President of Tibetan Youth Congress.

He further added that ‘as CCPcelebrates its founding day, we reach out to people who are the victims of this regime to forge our alliance in our pursuit of freedom and justice for our people’.

‘China's National Day-the anniversary of the founding of the People's Republic of China-is marked with speeches, flags, fireworks, but for the Tibetans, the day is a reminder of the brutal occupation of the Tibet and a time for world leaders to know that neutrality in the face of such atrocities is unacceptable and then we must act together to confront China's abuse of power’, said Khando, project officer of Tibetan Women Association.

‘China hosting the Winter Olympics 2022, goes against the spirit of the game. The rampant abuse of power and the human rights crisis under the Chinese government does not concur with the core principles of the Olympic Charter. We urge the IOC to reverse its decision on the grounds of human conscience’, said Ngawang Trirel, the president of Gu Chu Sum, Ex Political Association.

‘It is now time for the world governments, the especially Indian government, to correct the errors of the past and to take a lead in finding a solution to the Tibet situation; which starts with recognizing the Indo-Tibet border and Tibet as a separate, historically independent country that remains under China’s illegal occupation. We call on governments to build strong multilateral action to effectively challenge the Chinese Communist Party's totalitarian regime, to end current ‘ One China polices’, said Rinzin Choedon, National Director of Students for a Free Tibet-India.

The march includes the following demands: