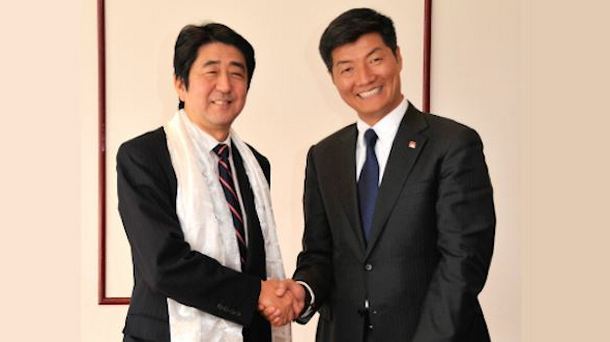 Sikyong Dr Lobsang Sangay with Mr Shinzo Abe, then leader of the Liberal Democratic Party during the former’s visit to Japan in April 2012. Photo: File/CTA

Dharamshala, India — On behalf of the people of Tibet, the Central Tibetan Administration paid tribute to the outgoing Prime Minister of Japan Shinzo Abe for his strong for Tibet and expressed strong concern about his declining health.

‘On behalf of the Tibetan people, I offer prayers for your successful treatment and quick recovery,' Dr Lobsang Sangay, President of the Central Tibetan Administration previously knowns the Government of Tibet.

"We would also like to express our profound gratitude for the unwavering support for the resolution of the Tibet issue through dialogue during your leadership,’ said Sikyong Dr Lobsang Sangay.

'Japanese Prime Minister Shinzo, the longest-serving prime minister of Japan, tendered his resignation due to health reasons on 28 August 2020. The Tibetan people pray for his successful treatment and quick recovery of his health,' it said, according to the Office of Tibet, Japan.

'Sharing Buddhism and a close historical relationship with Tibet since the time of the Great 13th Dalai Lama at the beginning of the 20th century, the people and government of Japan have shown genuine interest in Tibetan Buddhism, culture, and language. Japan became the first country visited by His Holiness the Dalai Lama in 1967 after coming into exile following China’s invasion of Tibet. Since then, His Holiness has visited Japan frequently with a growing interest in Tibetan culture and Buddhism among the Japanese people.

On the political front, Japan has been a vocal supporter for the restoration of freedom and human rights in Tibet and result-oriented dialogue between the Chinese government and the representatives of Holiness the Dalai Lama based on the Middle Way Policy to seek genuine autonomy for the Tibetan people.

The All-Party Japanese Parliamentary Support Group of Tibet has met Dr. Lobsang Sangay, the Political Leader of the Central Tibetan Administration, during his successive visits to Japan in 2012, 2016, 2017, 2018, and 2019.

In 2019, welcoming Sikyong Dr Lobsang Sangay to the Parliament Building, the All-Party Japanese Parliamentary Support Group of Tibet issued a statement expressing support for the Middle Way Policy to seek genuine autonomy for the Tibetan people within the framework of the Chinese constitution. They strongly criticized the Chinese government’s suppression of the unique culture, education, language, and religious freedom in Tibet.