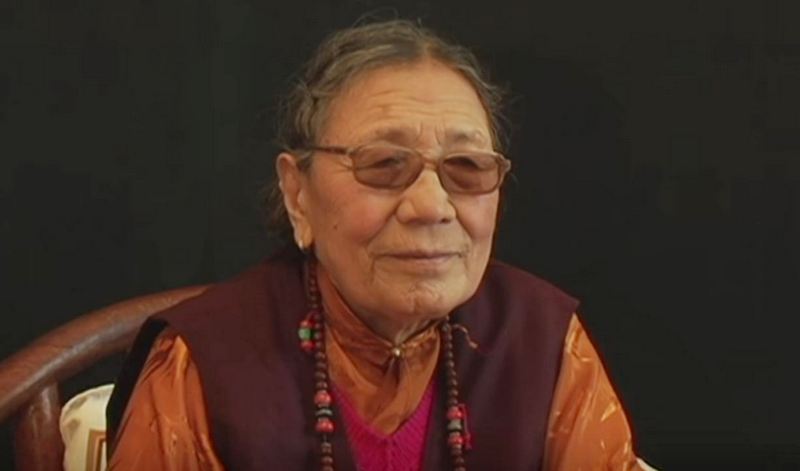 Adhe Tapontsang known affectionately as Ama Adhe, who was one of the longest-serving Tibetan political prisoners, in Dharamshala, India. Photo: File

Dharamshala, India —Tibetan freedom figher, Ama Adhe who spent 27 years in a prison of the Chinese communist totalitarian regime for taking part in the Tibetan resistance against China's invasion of Tibet in the late 1950s, passed away at the age of 88 years, on Monday, August 3, 2020.

The former Tibetan resistance fighter who spent more than a quarter-century as a Tibetan political prisoner for her role in fighting off Chinese communist invaders in eastern Tibet, when China was under Chairman Mao Zedong, one of the greatest mass murderers in human history.

Adhe was born in Nyarong, Kham Province, in 1928. She led a peaceful nomadic life until the Chinese occupation of Tibet. Her personal tragedy began in 1958 when her husband was poisoned by the Chinese authorities, who considered him a nuisance.

Adhe spent 27 years in a Chinese prison for taking part in the Tibetan resistance against the Chinese occupation in the late 1950s. Inspired by her indomitable spirit and valour with which she fought for the freedom and dignity of her people, Ama Adhe became known worldwide as a symbol of Tibetan resistance, courage, and patriotism.

Her father name is Dorjee Rabten and Mother Sonam Dolma. She was a devout Buddhist from a very young age. In an old interview, she described her feeling of terror upon seeing the Chinese for the first time and recounted how the Chinese tried to lure children with silver coins and their pretense to help Tibetans. Ama Adhe and her husband planned an escape to Lhasa, but her husband was poisoned by the Chinese before they could leave.

Ama Adhe then inspired other women to help the Tibetan men who fought against the Chinese by supplying food and provisions to them. The rebellion was crushed some of the women and many men and monks were arrested. Some of the stronger ones like Ama Adhe were taken away to a prison in Changshita, China. Only four out of the 300 women in that prison survived the ordeal of starvation there. In 1954, when Ama Adhe’s first child was one year old, and she was pregnant with the second, her husband died of poisoning right in front of her.

She then joined the Tibetan resistance of the Khampas to fight the Chinese invasion that began in 1950. In 1958, she was arrested and separated from her two young children. Ama Adhe was one of the Tibetans who served the longest prison terms, which was 27 years and ended only when Deng Xiaoping pardoned the political prisoners. During her incarceration, she suffered torture and forced labour. She was released in 1985.

Throughout her life in exile, she actively told the stories of life under Chinese occupation and of thousands of Tibetan prisoners who died under Chinese oppression. She fled to India in 1987 and made McLeod Ganj, exile seat of the Dalai Lama and the Tibetan administration, her home. In 1997, she released a book titled “Ama Adhe: The Voice that Remembers: The Heroic Story of a Woman’s Fight to Free Tibet”, depicting the harrowing conditions of her incarceration.

Speaking to Tibet Post International in 2016, about her life in prison and her political views on Tibet, Ama Adhe, one of the few Tibetans who survived, shared the stories of torture by the Chinese communist totalitarian regime of China.

Shortly after, her sister was arrested, publicly humiliated, and executed at the public square to “set an example.” Several months later, Adhe herself was arrested alongside 300 other women at a protest against the Chinese rule. Out of these 300 women, only 4 survived the severe starvation and forced labour brought upon them in prison.

On the day of her arrest, she was accompanied by her 4-year-old son. She told TPI, “when the Chinese police arrested me, my son clung on to my leg and cried but the Chinese kicked him away and I never saw him again...."

We lost another one of our warriors. She served 27 harsh years in Chinese prisons and labor camps before being released in 1985. And then escaping into freedom to India in 1987.” Youdon Ukartsang, a Member of Tibetan Parliament-in-Exile wrote on her social media Facebook.

“Her passing is a sad jolt and a call for us to rededicate ourselves so that the sacrifices of those that came before us are remembered and their unfinished work is completed. My prayers and deepest condolences. May she be reborn as a warrior,” Youdon further added.

“It is with great sadness that we share the news that Ama Adhe has passed away. An indomitable warrior, an exemplar of courage and compassion, she was one of the last of a generation of Tibetans who fought the Chinese invasion in the late 1950s,” Tenzing Sonam, a Tibetan film director, writer and essayist wrote on social media Facebook.

“Born in 1928, she spent 27 years in a Chinese prison for her part in the resistance and described the harrowing conditions of her incarceration in her book, “Ama Adhe: The Voice that Remembers: The Heroic Story of a Woman's Fight to Free Tibet”, Tibetan film director said.

“We met her for the last time in January 2019 when this photo was taken. Despite her advanced age and the unimaginable suffering, she endured during her time in prison, she still had that wonderful twinkle in her eye that radiated the warm generosity of her spirit. May her life and sacrifice not be in vain,” Sonam concluded.