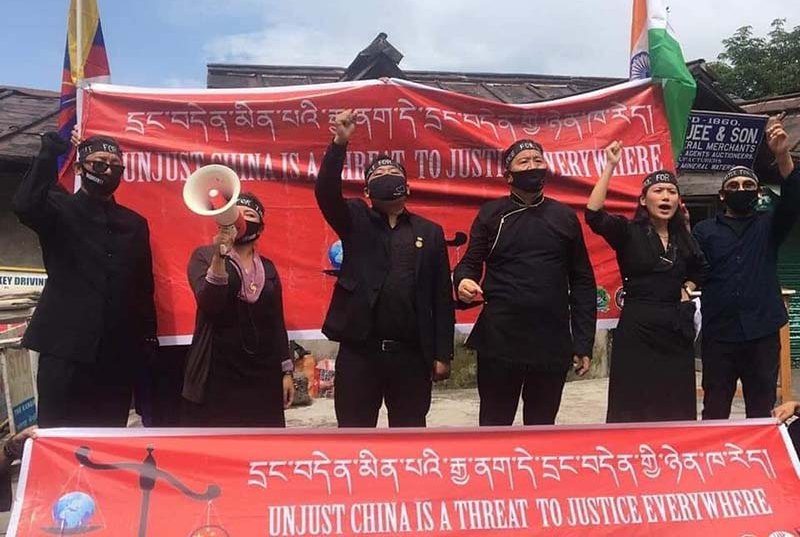 During an event in Dharamshala, India, on Friday, July 17, 2020, protesters holding posters, banners, and flags calling independence of rightful historical sovereignty of Tibet and rebuke "One China Policy", against world history. "With this we have also highlighted recent malevolent handling of Tibet by the Chinese Government regarding Wuhan originated Coronavirus," representatives said in a joint statement.

The five prominent Tibetan NGOs including Tibetan Youth Congress (TYC), Tibetan Women Association (TWA), Students for a Free Tibet (SFT), Gu Chu Sum Movement for Tibet and National Democratic Party of Tibet (NDPT) have issued a joint petition that has been submitted to the foreign Envoys/Embassies in India to bring worldwide attention and support for the current critical situation in Tibet under the Chinese oppressive rule.

“Since the outbreak, Chinese Government has neither been transparent nor taken measures to clarify these allegations. China has maliciously taken measures to conceal all information about the pandemic from the rest of the world including the prosecution of Dr Li Wen Liang and many others who tried to inform the world about the emergency," said Gonpo Dhondup TYC President.

"They have denied entry of the research teams from Interna national organizations and restricted entry of foreign journalists. Any possible digital coverage related issues of the disease have faced condemnation from China. This diplomacy was also used to keep the Global community in darkness. A new collective voice of critiques against China is underway from various parliamentarians, Non-Governmental Organisations (NGOs) and governments levels of all over the world,” TYC President added.

“We Tibetans and supporters all around the world must collectively stand together in order to make China accountable for the pandemic which has taken six hundred thousands lives. Tibetans have witnessed the Chinese regime of injustice and repression in Tibet for more than 60 Years. Out of six million Tibetans, over 1 million Tibetans have been persecuted and killed. Tibetan Culture heritage had been decimated with more than 6000 monasteries demolished,' TWA Secretary Tenzin Khando said.

"Thousands of Tibetans were held as political prisoners including Gedhun Choekyi Nyima, the 11th Panchen Lama, abducted at the age of 6 and whose whereabouts still remains unknown. From 2009 onwards, 155 monks and lay people have resorted to self-immolation to voice the need for freedom under Chinese regime. Their appeals have always included demands of independence and return of His Holiness the Dalai Lama to Tibet,” Secretary Khando added.

“Particularly this year in Tibet, on the pretext of Coronavirus epidemic, Chinese have imposed stern restriction on monks and laymen in Tibet going to monasteries for worship and blessings. Religious gatherings and assemblies are banned. In the name of national security issues, Chinese authorities have blocked all the external network channels and social media," said Rinzin Choedon SFT Director.

"Moreover, they probe into all the cell phone contacts and contents of the family members, particularly of those having relatives in foreign countries. The whereabouts of the victims of recurrent indiscriminate arrest and kidnapping are unknown,” Director Choedon added.

“Beside passing derogatory remarks on His Holiness the Dalai Lama through all the Chinese media outlets, Lay people and monks are also forced to denounce His Holiness in all the gatherings and in monasteries to oppose separatism in the name of patriotism, progressive education and religious affairs,” NDPT President Tsetan Norbu said.

“These extremely serious issues of human rights atrocities censored by the deceptive Chinese regime for 60 years have surfaced under the emergence of Chinese evil cover up of Wuhan Coronavirus. Here is a strong cause and evidence for the world to take action against China for their wrong doings in 17 pages of the critical situation of Tibet.” Gu Chu Sum Movement Secretary said.

“Therefore, we call upon international governments, organizations and world leaders to give witnesses to the urgency of Tibet's critical situation; lend their support more than ever to Tibetans in our struggle for freedom and independence of rightful historical sovereignty and rebuke "One China Policy", they further said in the joint statement.