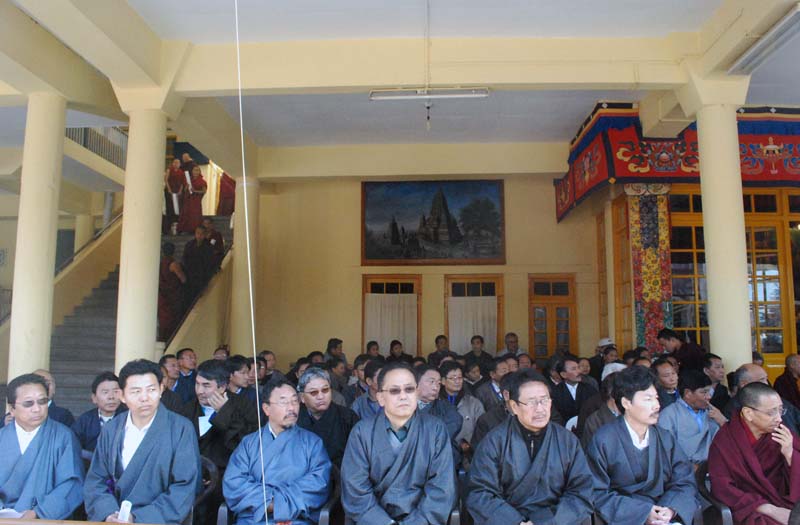 Dharamshala: A two-day general meeting of officials of the Central Tibetan Administration is being convened to define a clear vision and approach for the coming 50 years to realise the fundamental goal of Tibetan struggle.

The Committee for the commemoration of 50 years in exile under the supervision of the Kashag is organising the meeting at Lower TCV school in Dharamsala from 26-27 February.

Nearly 400 officials are holding extensive group deliberations to explore ways to develop a sustainable education, religion, health, political and socio-economic systems in the exile community. There will be discussions on overriding issues of sustaining a cohesive Tibetan communities in India, achieving specialisation in academic fields, retaining the moral behaviour of Tibetans and developing a self reliant exile community.

Kalon Tripa Prof Samdhong Rinpoche and the members of Kashag presided over the opening function of the meeting.

In his keynote address Kalon Tripa "emphasised the need to reflect on the past 50 years' experiences and told the officials to do a thorough review of their behavioural attitudes in order to define a clear approach to achieve the objectives of the Tibetan struggle."

Kalon Tripa said "whatever progress and negligence made in the Tibetan community past fifty years has not occurred naturally but due to the policy and projects formulated by the Central Tibetan Administration. So, the fulfilment of His Holiness the Dalai Lama's profound visions depends solely on the Tibetan civil servants. The civil servants cannot evade the fact that responsibility for the past achievements and failures lies on them. They need to accept the responsibility for the negligence and not feel happy about the results. The civil servants are the driving force of the past and future destiny of Tibetans in exile."

Kalon Tripa said in the meeting should come out with viable ideas and suggestions by carefully analysing the geopolitics, education and dedication of the Tibetan people, and political situation in China. He said our approach should be based on the maxim of His Holiness the Dalai Lama to "hope for the best and prepare for the worst".

In addition to officials from all the departments and offices in Dharamsala, the representative of His Holiness the Dalai Lama to Nepal and settlement officers from 42 Tibetan settlements from across are attending the meeting.