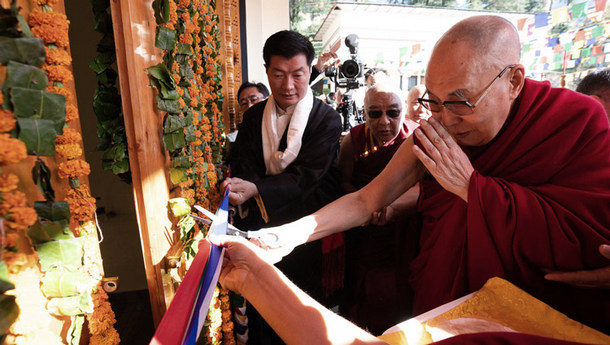 His Holiness the Dalai Lama cutting a ribbon to inaugurate the Tibetan Institute of Performing Arts' new auditorium in Dharamsala, India on October 29, 2019. Photo by Tenzin Choejor

Dharamshala —In the Presence of His Holiness the Dalai Lama and top government officials, the Tibetan Institute of Performing Arts (TIPA) its biggest arts celebration on October 29, 2019. Based in Dharamsala, the institute this year celebrates its 60th anniversary, certainly a milestone in preservation and promotion of Tibetan musical heritage; age-old folk music, opera and dance tradition of Tibet.

Tibet has been celebrated as the Ocean of Songs and Dances for over hundreds of years. Tibet’s musical heritage and its associated art as deeply immersed in the wisdom of Buddhist tradition and values have been passed down through generations. Each musical feature pertains to different unique occasions in the Tibetan cultural, social and religious lives; some celebrate the birth and teachings of great beings, some welcome the advent of the new year but all sprouting from the common wellspring of the Tibetan civilization.

This foundation was resurrected here in India, the land of Tibet’s spiritual guru, under the guidance of His Holiness the Dalai Lama in the form of the Tibetan Institute of Performing Arts. Subsequent support and leadership were shown by many great artists and scholars of Tibet.

As His Holiness drove through McLeod Ganj to the TIPA, the streets were lined with smiling Tibetans and other well-wishers, many with white scarves in their hands. In the village, children from Yongling School sang as His Holiness’s car passed. On arrival at TIPA, His Holiness was welcomed by President Dr Lobsang Sangay, TPiE Speaker Pema Jungney and Chief Justice Commissioner Sonam Norbu Dagpo. Meanwhile, performers sang and danced by way of greeting.

His Holiness cut the ribbon and pushed open the door of TIPA’s new auditorium, symbolising its inauguration. He was escorted to his seat on the stage where he was offered a mandala and the threefold representations of the enlightened body, speech, and mind. TIPA director Ngawang Yönten announced that a three-day conference was being held to mark the 60th anniversary of the founding of TIPA. He duly paid respect to His Holiness, the Three Pillars of Tibetan democracy—the Sikyong, TPiE Speaker and Chief Justice Commissioner, members of the Swiss Norzang Foundation and other guests and dignitaries.

He reminded everyone present that His Holiness fled Tibet in early 1959 and, once safe in exile, having set up the Kashag, he encouraged Nornang, Ngawang Norbu to establish the first Tibetan NGO, the Tibetan Institute of Performing Arts, in Kalimpong. Since that time more than 500 students have graduated from the Institute. At present, TIPA has 107 members.

Director of Amnye Machen, Tashi Tsering, introduced the First International Symposium on Tibetan Performing Arts. He mentioned that the first TIPA was set up in Kalimpong, under His Holiness’s direction, on 18 August 1959. He went on to list the various different performing arts traditions. While he spoke, His Holiness surveyed the faces of the audience with a fond smile.

To mark its 60th anniversary, Sikyong Dr Lobsang Sangay offered the Kashag’s greetings to all present and suggested that after Tashi Tsering’s thorough explanation there was little left for him to say about the performing arts. He noted, however, that the founding of TIPA should be counted among His Holiness’s celebrated deeds, as a result of which it is now possible to send teachers of performing arts out into Tibetan schools wherever they are. He praised His Holiness’s far-sightedness.

The Sikyong also observed that Tibetans are one small group among 70 million refugees in the world. According to a UN report, 4 million children among them are unable to go to school. Tibetans educate all their children and the literacy rate among them is 92%.

Tokens of gratitude were then offered by TIPA to the Kashag, the Norzang Foundation and to Sangpo Rinpoché, who at 93 is the oldest living member of TIPA. Artists performed a song of thanksgiving to His Holiness, the gist of which was to say, “Although we can’t repay your kindness to us, we promise to do our best to fulfill your vision”. A statue of a Ngönpa dancer, representing Vajrapani, was offered to His Holiness and he was invited to address the assembly.

“Tibetans young and old, men and women are here to celebrate the 60th anniversary of the establishment of TIPA. If we look back on our history, we may recall that King Songtsen Gampo took the initiative to commission a script in which to write Tibetan. After that, King Trisong Detsen invited Shantarakshita from India to establish Buddhism in Tibet. In Samye Monastery a separate department was set up, on Shantarakshita’s advice, to translate Buddhist literature into Tibetan. Guru Padmasambhava worked to overcome obstacles.

“Buddhism was firmly established on Tibetan soil as a result of the King, Trisong Detsen, the Abbot, Shantarakshita and the Adept, Padmasambhava, working together. Subsequently, Tibet remained united through the 8th century and into the 9th, but after that politically fragmented. Nevertheless, the Nalanda Tradition was one of the things that brought us together and has been preserved until today. Indeed, only Tibetans have maintained a complete presentation of Buddha’s teachings.

“Here we are in peace with each other, but elsewhere in the world, at this moment, people are fighting and killing each other, some of them in the name of religion. Religions teach a common message of love, tolerance, and compassion, so violence in the name of religion is especially sad. Drawing on our uniquely peaceful tradition, we Tibetans can make a special contribution to the world at large.

“When we Tibetans came into exile, the only things we could be sure about were the sky above and the earth below. We were helpless, without protection and without refuge. And yet despite hardship over more than 60 years the spirit of Tibetans in Tibet remains undaunted. They have no freedom, but their determination has inspired those of us in exile to exert ourselves to preserve our culture and traditions.”

His Holiness recalled how, with the support of the Government of India and Pandit Nehru’s personal interest, Tibetans set up schools for their children. To begin with, monks who had escaped were building roads in the Himalayan regions. But on appeal to the Government of India, a site to bring them together was found in Buxa. 1500 monks were assembled to resume their studies.

In due course, the great monasteries were re-established in the south of India where the monastic curriculums were reinstated. His Holiness remarked that in the past Tibetan Buddhism was dismissed in some quarters as ‘lamaism’ as if it was not a genuine Buddhist tradition. Since then, there has been widespread recognition that in fact, Tibetan Buddhism is an authentic heir of the Indian Nalanda Tradition, renowned for its reliance on reason and logic.

“Today, Tibetan culture and religion have earned respect, even among scientists,” His Holiness declared. “Hardliners among the Chinese leadership after vain efforts to undermine it are conceding the errors of their policies and becoming more realistic. We have worked hard to preserve our culture and traditions. The Tibetan theatrical arts are a valuable part of our heritage and you have done well here to keep them alive. The younger generations will still be able to take them forward.

“Our struggle is based on truth. The Chinese rely on the use of force and the power of the gun, however, in the long run, it is the truth that will prevail. Don’t lose heart, keep your hopes bright. I’m 84 now and look forward to living another 10 or 15 years. I’ll do my best; I trust you all will too.”

The Secretary of TIPA offered words of thanks to bringing the occasion to an end. He thanked His Holiness for coming and thanked everyone else who had provided support. He ended with the wish that all obstacles to His Holiness’s long life would be dispelled and that peace would flourish in the world.

Various groups from the audience posed for photographs with His Holiness, who then took rest on the balcony of the building overlooking the courtyard. Members of the public and TIPA artists spontaneously gathered below and sang plaintive songs for His Holiness’s long life and for peace in the world.

The historic moment was observed in the gracious presence of its founding father, His Holiness the Dalai Lama, and through a promising symposium of Tibetan and non-Tibetan intellectuals and scholars on the understanding of relevant interdisciplinary studies in Tibetan Performing Arts, secular or religious. The Institute’s pioneering, former members and the current artists came together for a mega showcase of Tibet’s performing arts.

The cultural feature included performances of prominent exile artistes such as Techung, Tsering Gyurmey, Passang Lhamo among others. Catch some of the glimpses of Tibetan opera, age-old folk music and dance tradition of the three provinces of Tibet showcased by the most celebrated exile artists.