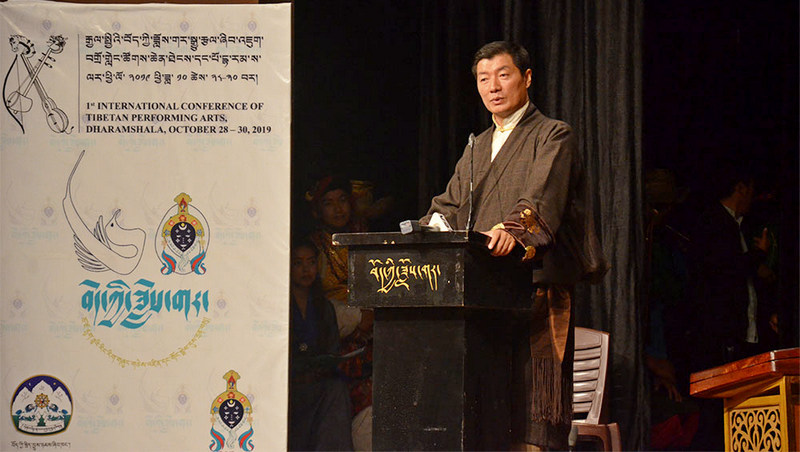 President Dr Lobsang Sangay speaking at the inaugural ceremony of the First-ever International conference of Tibetan Performing Arts and the 60th anniversary of TIPA, October 28, 2019, in Dharamshala, India. Photo: TPI/Yangchen

Dharamshala — The current political leadership of Tibet's exiled government, profusely praised and thanked U.S. Ambassador at large for International Religious Freedom Samuel D Brownback and trumpeted that their presence is sending a powerful message to China, saying this also sends a hope to Tibetans inside Tibet and signifies— "Religious freedom is universal, Human rights are inherent, Democracy is inevitable."

As the chief guest, the U.S. Ambassador Brownback attended the First International Conference on Tibetan Performing Arts and the 60th-anniversary celebrations of the Tibetan Institute of Performing Arts (TIPA), in Dharamshala, India, on Monday, after receiving a special audience with His Holiness the Dalai Lama.

Over 26 scholars-Tibetan and non Tibetan-from 10 countries invited, this year’s gathering marks the first-ever and the highest-profile convening on Tibetan art and culture in the exile history of Tibet.

In his keynote address, President Dr Lobsang Sangay spoke about religious freedom and human rights and about the sustaining role that Tibetan history, culture, and religion play in maintaining the spirit and vitality of the Tibetan people. He profusely thanked the United States for their generous support to the people of Tibet.

Dr Lobsang Sangay: “the first-ever international conference of Tibetan Performing Arts in partnership with Tibet policy institute. On behalf of Kashag and CTA would like to extend our heartfelt welcome to all. I want to thank Ambassador Brownback for being here because this journey took a bit of complicated road, I think the initial karmic connection was not that clear but the ambassador worked very hard and he pushed from Washington DC and we pushed from Dharamshala and Delhi."

"Finally, on Wednesday, the ambassador got his visa to come to India and then he pushed very hard within the state of the department and the Whitehouse to clear his speech so in the last three days everything fell in place, so that means I think ambassador you are bound to be here," President said, adding: "That’s the karmic connection, therefore we want to thank the ambassador for making all the effort to specifically come to Dharamshala to be with us."

"When I extended my invitation to the ambassador, we all are not so sure whether it will materialize or not but finally it did. As some of you might know ambassador has been at the forefront, advocating for religious freedom, for Tibetan people, for Uyghurs and the people of all faith around the world. And in his leadership, he organized two ministry level conferences on ‘Religious Freedom’ and more than 90 countries participated," he said.

"In both, the times, ambassador and his office made sure that the Tibetan delegation or representatives are part of the delegations Ministerial to Advance Religious Freedom (MARF), therefore, Representative Ngodup Tsering, Office of Tibet, Washington DC and the staff were invited both times and we had formal political prisoners who gave person testimonies in both the MARF conferences," the Tibetan leader further said.

Tibetan President went on to say that "Ambassador made a very strong speech on religious freedom in Hong kong. And he has been a very bolt in talking about the religious freedom of Tibetan people and people around the world. A big Salute to you for your courage and moral standing. I would like to thank the US government, particularly the government and the president as you can see this conference is organized with the funding of USAID, so both Congress passed the law in the budget for activities of the Central Tibetan Administration in India and Nepal."

"And President Trump signed it and because of which we can do lots of things including organizing this conference. Vice-President Mike Pence, I think he gave the strongest speech ever by any U.S. leaders on Human Rights in China. Secretary of State Mike Pompeo also mentioned Tibet and Human Rights issues in China," Dr Sangay added.

"Therefore, the U.S. government has been at the forefront advocating for the Human Rights of people in China particularly Tibetan people. 60 years ago, we lost our country, and we had barely a sky and the earth as our friends nothing else. In that particular period in 1959, His Holiness told two dozen refugees not to give up but to work hard. As one day we will succeed, the artists took the words and dedicated their hearts to it and started this institution," the President continued, saying: "TIPA members are spreading their performance around the world."

President praised the Institute, saying "Tibetan Performing Arts are not simply about performance. The song is the only language that is shared between heaven and earth. Not only Tibetan songs and Tibetan operas are beautiful to look at but also good to listen too. This is a serious, substantive issue about Tibetan history, about Tibetan culture which is several thousand years old which we have preserved."

"It has historical significance much much deeper meaning than what you can see here. Hence in partnership with Tashi Tsering, director of the Amnye Machen Institute, we organize this conference. We have experts from around the world, 80 international experts and 6 Tibetan experts. Aims to compile a book of this conference in the next three days. So that those interest to know about Tibet will read them in a book. All are sincerely requested to feel welcome and feel free to share one’s thoughts, mind, and feelings for the next few days," he continued.

In the same vein, President Sangay acknowledged and thanked the leadership of the U.S. government in advocating for the human rights of people in China, particularly the Tibetan people. He referred to the recent speech delivered by Vice President Mike Pence, describing it as “the strongest speech ever by any US leaders on human rights in China”. “Secretary of the State Mike Pompeo has also mentioned Tibetan and human rights in India.”

Speaking on the political significance of the 60th anniversary of the Tibetan premier institute of arts and culture, the President said the design of the Chinese occupation of Tibet, from early 1959, was to destroy the source and foundation of Tibetan identity. But from rubbles of complete destruction, the Tibetan Buddhism, culture, language, art and medicine were revived and the major hubs were rebuilt in exile in the last 60 years under the leadership of His Holiness the Dalai Lama and the support of friends around the world. Even inside Tibet, Tibetan Buddhism is fully preserved and revived in personal and social capacities.

Dr Sangay quoted the 10th Panchen Lama’s 70,000-Character Petition which recorded destruction of 98 percent of monasteries in the Tibet Autonomous Region and the Tibetan areas incorporated into the Chinese provinces and the mass starvation and imprisonment in Tibet. He said the Petition clearly proved two important facts: first, that the occupation of Tibet was not a peaceful liberation, it was extremely destructive; Secondly, it debunked the Chinese people’s attribution of the destruction of Tibetan monasteries and nunneries as the aftermath of cultural revolution.

The report submitted in 1962 clearly showed that the destruction of the Tibetan religion was more or less completed before the Cultural Revolution which began 1965 onwards. In 1962, the 10th Panchen Lama made the first major criticism of Chinese policy in Tibet in the form of the ’70,000-Character Petition’ submitted to Mao Zedong. The Chinese government kept the petition as a State secret. Two years later, the Panchen Lama was declared ‘an enemy of the people’ and was imprisoned for nine years and five years under house arrest.

“The situation in Tibet grave and serious. Hence we really appreciate the international participants and encourage you to share your scholarship and knowledge about how rich Tibetan culture was, is and should remain so,” he said, adding: “In that context, I really appreciate Ambassador Brownback for being here because as far as the Tibetan Administration is concerned, you are one of the highest US officials to have visited Dharamshala.”

“Your presence sends a message that religious freedom is universal, human rights is inherent and democracy is inevitable. By your presence, you are sending a message to Beijing. I think they will hear it loud and clear that the Ambassador and the US government are with the Tibetan people. For this, we are very grateful.”

“You are sending a message of hope and inspiration to Tibetans in Tibet. The six million Tibetans are longing to hear a piece of good and positive news. A person of your standing—former Governor, former Senator, a leader in the Republican Party— to be here, you’re sending a powerful and right message to Tibetans inside Tibet that there is hope and we will struggle with you till basic freedom is restored and faith is granted as a universal freedom. Thank you very much.”

The democratically elected Tibetan leader concluded by saying "the presence of the US ambassador of international religious freedom signifies, Religious freedom is universal, Human rights are inherent, Democracy is inevitable, It is sending a powerful message to Beijing and it also sending hope to Tibetans inside Tibet”.

President of the Tibetan government in-Exile has repeatedly reiterated its commitment to the His Holiness the Dalai Lama’s Middle Way Approach that seeks "genuine or meaningful autonomy" for Tibet within the framework of the People’s Republic of China. However, over the past 70 years, the Chinese communist-totalitarian rule in Tibet has driven by cultural genocide, political repression, cultural assimilation, social discrimination, economic marginalization, and environmental destruction.