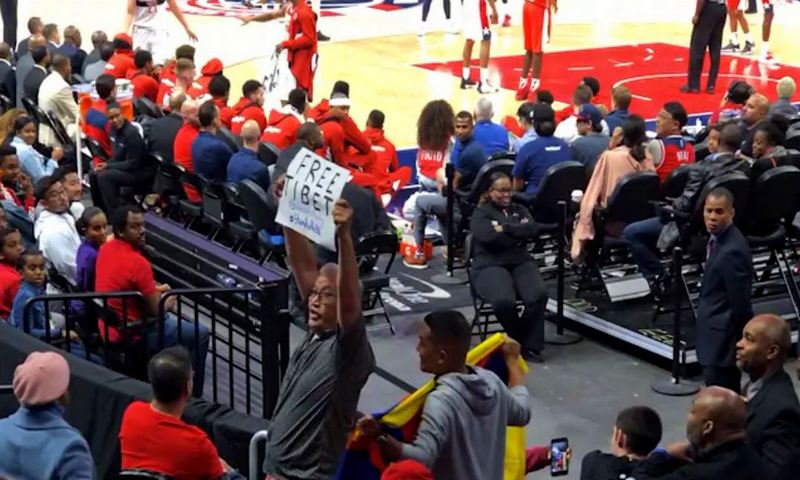 Tenzing Barshee with a placard saying “Free Tibet” and his friend James San Mateo with the Tibetan flag at the NBA game in Washington, D.C. on October 9, 2019. Photo: Youtube Screenshot

Washington D.C.— A Tibetan American protestor is speaking out after he and a friend were ejected from the Washington Wizards game against the Guangzhou Loong Lions of the Chinese Basketball Association on Wednesday, October 9, 2019.

During the game in the Capitol One Arena in Washington, DC, Tenzing Barshee, a Tibetan American from Virginia, held up a sign saying “Free Tibet,” while his friend held the Tibetan flag. Tibet, a historically independent country, has been brutally occupied by China for the past 60 years.

Video footage posted on social media shows showing, Barshee and his friend were approached and spoken to by several officials before eventually being escorted out of the stands. They have raised the national flag of Tibet and shouted free Tibet slogans.

Speaking to the International Campaign for Tibet on Thursday, October 10, Barshee said he was invited to the game by his friend James San Mateo, who is a Wizards’ season ticket holder.

“I couldn’t pass the opportunity especially after all that has happened since Houston Rockets GM Daryl Morey's tweet and NBA’s commissioner Adam Silver’s statement about the tweet along with Joe Tsai, Brooklyn Nets owner/Alibaba Chairman statement,” Barshee said by email.

“I had to use this opportunity to shine a spotlight on Tibet’s plight.”

Barshee said he and San Mateo had the Tibetan flag unfurled for nearly two-quarters of the game before security staff warned them to put it away.

“[T]his is when we decided to pull out the Free Tibet sign with #StandwithMorey, #StandwithHK and started to scream Free Tibet!!,” Barshee wrote in his email. “We were then escorted out of the game.”

Americans waking up to Chinese censorship

Barshee’s ejection comes after days of exploding controversy over Morey’s tweet on Oct. 4, which showed support for pro-democracy protestors in Hong Kong.

Morey’s tweet set off a cascade of vitriolic and punitive action from Chinese officials and organizations. However, China’s hysterical response appears to have backfired, as Americans now seem to be waking up to the pervasive reach of Chinese censorship in the US.

Just last year, US hotel chain Marriott apologized to China for listing Hong Kong, Macau, Taiwan and Tibet on their website as separate countries from China. Even more egregiously, Marriott later fired an American employee who liked a pro-Tibet tweet from a company account.

Now the focus of attention has shifted to the NBA. According to the Associated Press, during the same Wizards game on Oct. 9, several attendees shouted out for a free Hong Kong.

That same day, a bipartisan group of US senators and representatives wrote to NBA Commissioner Adam Silver saying “It is outrageous that the Chinese Communist Party is using its economic power to suppress the speech of Americans inside the United States. It is also outrageous that the NBA has caved to Chinese government demands for contrition.”

The letter urges Silver to take a number of vital steps, including clarifying “in internal association documents that public commentary on international human rights repression—including in Tibet, Hong Kong, and Xinjiang—falls within expected standards of public behavior and expression.”