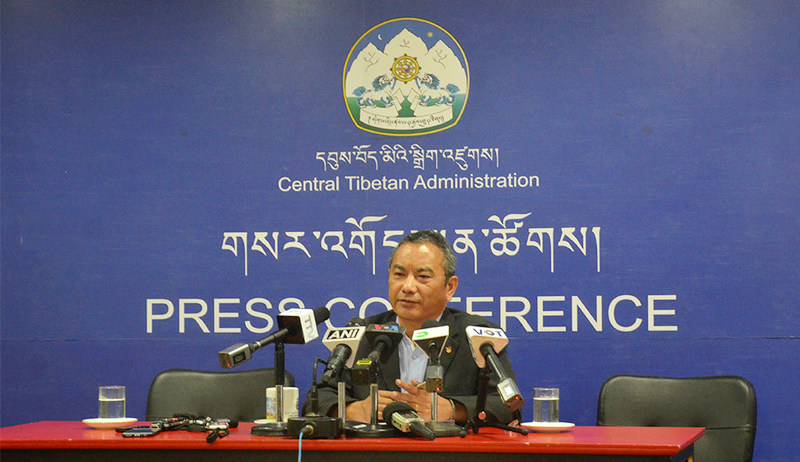 Tsewang Gyalpo Arya, Secretary of the Department of Information and International Relations of the CTA, speaking to the media in Dharamshala, India, on October 1, 2019. Photo: TPI/Yangchen Dolma

Dharamshala, India —The 70th founding anniversary of the People’s Republic of China is marking 60 years of occupation of Tibet, a top official of the Tibetan government in-Exile said, while responding to China's false claims about the so-called progresses in Tibet.

A press conference was held on Tuesday, October 1, 2019, by the Department of Information and International Relations (DIIR) of the Central Tibetan Administration (CTA). Tsewang Gyalpo Arya, Secretary of the DIIR said: "the 70th anniversary of the founding of the People's Republic of China marks as the 60th anniversary of China's occupation of Tibet."

'China has occupied Tibet since the invasion of 1959. Today marks the 60th anniversary of China's occupation of Tibet— over 1.2 million Tibetans were killed and more than 6,000 monasteries were destroyed. In Tibet even today there is an ongoing wave of political repression,' the Secretary said.

The white paper claims there are great "progresses in Tibet" such as "administrators are Tibetans, religious freedom enjoyed and human rights protected, but in reality, none of these things are true, he continued saying that "the Tibetan language has became a secondary language in Tibet itself."

“Tibet Autonomous Region (TAR) is administrated by Tibetans themselves, but all 40 party secretaries of the so-called TAR were Chinese, not a single Tibetan became the most high-ranking official, except few deputy positions, so their claims of the ethnic Tibetans fully govern Tibet are completely wrong”, Secretary Gyalpo further added.

The DIIR has released the following statement to the media. "On 1 October 2019, the People’s Republic of China is celebrating its 70th founding anniversary with great pomp and fanfare, the main highlight being an unprecedented military parade in a brute show of force to demonstrate country’s emergence as a global superpower. Its message is very clear: “China has the capability to protect its sovereignty and territorial integrity and any country that attempts to provoke China and threaten China’s territorial sovereignty and integrity should think twice,” China’s state tabloid Global Times reported earlier.

As Beijing gears up for huge national celebrations, because of the ongoing unrest in Hong Kong as well as the gross violation of human rights in Tibet and East Turkestan, the PRC’s founding anniversary has been dubbed by some as a “Day of Grief”.

As far as Tibet is concerned, to put in the words of the late X Panchen Lama, “Tibet has lost more than gained under Chinese rule.” China’s military conquest of what was once a peaceful, independent country was followed by decades of gory death and destruction. Over 1.2 million Tibetans have perished within three decades following China’s invasion of Tibet in 1949/50. Nearly 6,000 monasteries were ransacked and destroyed. China’s so-called development projects in Tibet have induced a massive influx of Chinese population along with wanton destruction of its pristine ecology. In what many views as a form of cultural genocide, China’s policy of Sinicization has resulted in a wholesale assault on all vestiges of Tibetan national identity, most notably their language, religion, and culture.

Severe restrictions of basic human freedoms, arbitrary arrests, incommunicado detentions and torture and unnatural deaths have all become the hallmarks of Chinese rule in Tibet. The grim human rights situation inside Tibet is nowhere more starkly evident than the fact that since 2009 over 153 Tibetans have committed self-immolation in a desperate act of protest against the repressive policies of the Chinese government. No wonder Freedom House has ranked Tibet as the second least free region after Syria consistently for four consecutive years.

If recent developments inside Tibet are any indications, China’s repression has only scaled new heights, including the ongoing destruction in Larung Gar and Yarchen Gar religious complexes; forced eviction of monks and nuns from their monasteries and nunneries; and indoctrination and intimidation of monks and nuns. China’s atheist Communist Party is not just controlling the daily life inside the monasteries, but also willfully meddling and manipulating the centuries-old Tibetan Buddhist tradition of reincarnation for their own political gains. Worst of all, the so-called grid management system of surveillance has turned entire Tibet into an Orwellian police state.

Despite the seemingly insurmountable odds stacked against the Tibetan people, China has thus far failed to stifle their indomitable spirit and resilience. The past 60 years of Chinese occupation of Tibet is in a way also a story of 60 years of Tibetan people’s peaceful resistance against what has been one of the most brutal regimes on this planet.

Tanks and guns will not silence the voices of brave Tibetans. Force and might will not suppress the spirit and truth of Tibet. As Shri Jayaprakash Narayan rightly said, “Tibet will never die because there is no death for the human spirit. Communism will not succeed because man will not be a slave forever…”