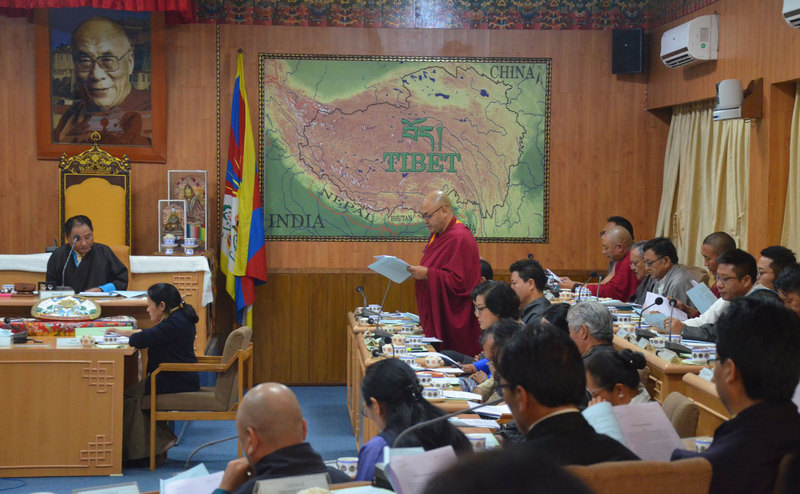 The proceedings of the first day of the 8th session of 16th Tibetan parliament, in Dharamshala, India, on September 20, 2019. Photo: TPI/Yangchen Dolma

Dharamshala, India — The Tibetan Parliament in-Exile unanimously passes a resolution condemning China’s interference in the reincarnation of His Holiness the Dalai Lama, calling Beijing to end it's politicised campaigns to co-opt Tibetan reincarnation system. The next Dalai Lama would be the 15th incarnation over an unbroken lineage that has lasted some 500 years.

The Tibetan Parliament-in-Exile on Friday, September 21, 2019, vehemently condemned China’s brazen meddling in the reincarnation of His Holiness the Dalai Lama and the politicization of the sacred institution of the Tibetan reincarnation.

The resolution also criticized China’s politicised campaigns to co-opt Tibetan reincarnation system, citing the recent “training session on reincarnation for a living Buddha” that began 23 August this year in Lhasa targeting around 100 Tibetan Buddhist monks from 73 monasteries across Tibet.

"The practice of reincarnation is very unique to the Tibetan Buddhist world and China cannot duplicate it or manufacture it," the democratically elected head of the Tibetan Government in-Exile, Dr Lobsang Sangay recently said while speaking at the Center for Strategic and International Studies, a think tank based in Washington, D.C., in the United States, on the subject of 'Reincarnation in Tibetan Buddhism'.

Answering a question about the issues related to the next reincarnation of His Holiness the Dalai Lama, Prof Samdhong Rinpoche, former Prime Minister of the Tibetan government in-Exile and envoy of His Holiness the Dalai Lama Office recently told Indian media, “not by government of China neither the Government of India has anything to do with that and that has been made very clear by His Holiness' 2011 declaration. That’s very clear in the public domain so there is no question of India’s intervention or China’s intervention”.

In an exclusive interview in March this year, His Holiness the Dalai Lama told Reuters news agency that following his own death, his next incarnation might be recognized in India, where he has lived in exile since 1959 after China's illegal invasion and ruthless occupation of Tibet.

“China considers Dalai Lama’s reincarnation as something very important. They have more concern about the next Dalai Lama than me,” His Holiness told the Reuters. “In future, in case you see two Dalai Lamas come, one from here India, in a free country, one chosen by Chinese, then nobody will trust, nobody will respect the one chosen by China. So that’s an additional problem for the Chinese! It’s possible, it can happen.”

His Holiness has also previously suggested that the lineage of the Dalai Lama could end when he dies. “The Dalai Lama institution will cease one day. These manmade institutions will cease,” His Holiness told BBC in 2014. “There is no guarantee that some stupid Dalai Lama won’t come next, who will disgrace himself or herself. That would be very sad. So, much better that a centuries-old tradition should cease at the time of a quite popular Dalai Lama.”

In a public statement in 2011, His Holiness the Dalai Lama emphasized, “Reincarnation is a phenomenon which should take place either through the voluntary choice of the concerned person or at least on the strength of his or her karma, merit, and prayers. Therefore, the person who reincarnates has sole legitimate authority over where and how he or she takes rebirth and how that reincarnation is to be recognized. It is a reality that no one else can force the person concerned, or manipulate him or her.”