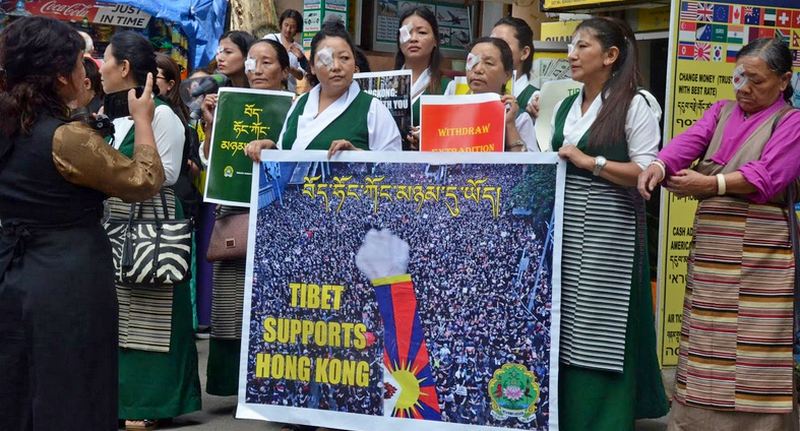 Protesters in Dharamshala, India on August 31, 2019, patched on the right eye as an expression of solidarity with the woman who has recently been shot in the eye by a projectile fired by the police. Photo: TPI/Yangchen Dolma

Dharamshala, India —Tibetan women in-Exile in Dharamshala, India, and their supporters held a peace rally in solidarity with the people of Hong Kong for their fight for justice, freedom, democracy, and rights to self-determination. Marchers patched on the right eye as an expression of solidarity with the woman who has recently been shot in the eye by a projectile fired by the police.

Protesters say Tibetans stand in solidarity with the people of Hong Kong and hope that Hong Kong will not become another case of Tibet.

India based the Central office of the Tibetan Women's Association, along with Regional office in Dharamshala organised a short distanced Peace March circling the main street in Mcleod Ganj town on August 31, 2019, starting from the Main Square, by marching with banners that read, “Tibet in solidarity  Hong Kong” “ Free Hong Kong”, “Tibet supports Hong Kong," “Withdraw Extradition Bill”, “Hong Kong we are with you”. The rest of RTWA chapters also held a Peace March Rally to stand solidarity with Hong Kong at their respective regions.

Tibetan Women Association’s statement said, “Hong Kong, a former British colony, was returned to China in 1997 under a policy known "one country, two systems," which promised the territory a high degree of autonomy. The policy has helped preserve Hong Kong's civil service, independent courts, freewheeling press, open internet and other features that distinguish it from the Chinese mainland. And the Basic Law guarantees that the Chinese authorities cannot stifle dissent in Hong Kong with an iron fist, they do across the mind and in Tibet”.

“However, by introducing The Extradition Bill, Beijing attempts to interpret the Basic Law and have “complete jurisdiction” over Hong Kong. The bill would allow virtually anyone in the city to be picked up and detained in mainland China,country in which judges must follow the orders of the Communist Party”, it continued.

It also said that “We know that the Chinese government would tarot. not just criminals but political activists as well. Millions of Hong Kongers took to the street to demonstrate against a proposed law that would allow extraditions to mainland China. This mass movement in Hong Kong is not just a movement against a controversial law but also a protest to demand greater democracy in Hong Kong. Hong Kong might become another case of Tibet if this continues and Beijing interferes more Invasive in its affairs”.

“Similar to how Mainland China is currently dealing with Hong Kong. Beijing began negotiation With Tibetan representatives over Tibet's future in 1950. Beijing promised Tibet a “high degree of autonomy”. They agreed that foreign affairs and defense would be Beijing’s responsibility and that Tibet was free to pursue its political, religious and cultural affairs free from any interference from the Chinese regime” it added.

The statement also mentioned the current situation in Tibet by “Around 155 Tibetans burned themselves to death and these are the most compelling proof of what China has done to Tibet's region and its people. Tibet’s own’s culture, language, traditions, and way of life turned upside down by constant social and ideological remodeling by Beijing. Hong Kong will face a similar tragedy if PRC succeeds in having complete control over Hong Kong."

"Like Hong Kong, Tibet is heaving with million or Chinese visitors. While Cantonese is thriving in Hong Kong, Tibet alphabet system and dialects are dying. The parallels between Hong Kong and Tibet the striking. Troops were deployed during the 2008 unrest in Tibet to clamp down on monks and nuns and pro-Independence activists resulting in the deaths and imprisonment of many. After the political unrest in 2008. a succession of self-immolation followed in Tibet throughout the following years. Similarly, Troops are being deployed to hold and attack the protesters at Hong Kong mass movement. Tear gases are being thrown and guns are being drawn by the police which has resulted in the death and injured of many”.