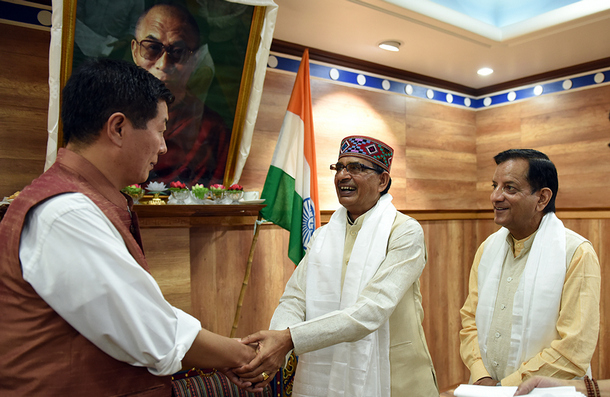 Shri Kishan Kapoor, Member of Parliament of Lok Sabha from Kangra constituency and other dignitaries from the state government were also present in the meeting.

Their meeting focused on various issues related to Tibet and the long-standing historical relationship between India and Tibet. While welcoming the delegation, Dr Lobsang Sangay along with the cabinet ministers offered gratitude to the Indian government and the state leaders for hosting and supporting the Tibetan people.

The meeting with the distinguished guests took place at the Kashag secretariat auditorium, in Dharamshala, India, on August 20, 2019. The Tibetan President informed them about the current situation inside Tibet and urged the BJP leader to continue his support for the Tibetan cause.

The senior BJP leader also met with Pema Jugney, the Speaker of Tibetan Parliament in Exile at the parliament building where the Speaker greeted them and introduced on Tibetan democracy in exile and explained about the map of Tibet, hanging from the middle of the wall of the Assembly Hall of the Parliament.

Speaking to reporters on the same day, Chouhan told that it is the blessings of His Holiness the Dalai Lama’s teachings that has converted Dharamshala into a landmark for peace and compassion. He even acknowledged that the Indians consider the Tibetans as a part of the family and they will always stand by Tibet.

After the meeting with the Tibetan leaders, the senior BJP leader also tweeted about the visit and wrote, "Delighted to have met Hon Prime Minister of Tibet Shri Lobsang Sangay."

"People of Tibet are truly humble and grateful. May be peace and harmony prevail amongst mankind as per the teachings of H.H Shri Dalai Lama," Shri Chouhan further wrote.

According to his office, Chouhan also said that during his tenure in Madhya Pradesh, he set up the Anand department in order to achieve human perfection, how to achieve enlightenment.