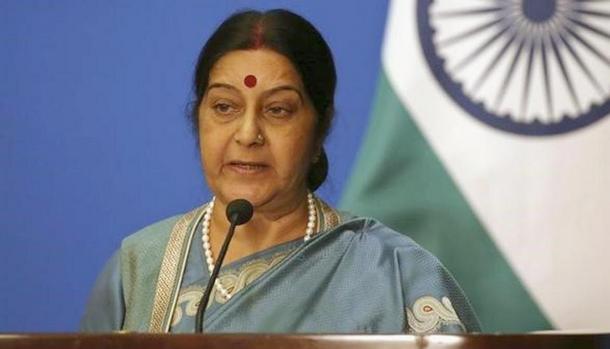 Dharamshala, India — The spiritual leader of Tibet, His Holiness the Dalai Lama, President of the Tibetan government in-Exile and Speaker of the Tibetan Parliament in-Exile have sent their condolencesover the demise of Sushma Swaraj, former Minister of External Affairs who passed away at the age of 67 after suffering a cardiac attack, on Tuesday.

On receiving reports today of the passing away of veteran Indian politician and former External Affairs Minister Sushma Swaraj, His Holiness the Dalai Lama expressed his sympathy in a letter to her husband Kaushal Swaraj, according to the office of His Holiness the 14th Dalai Lama.

“I offer my prayers and my condolences to you and your family at this difficult time,” he wrote. “Shrimati Swaraj enjoyed immense respect for her compassionate concern for people and her friendly demeanour. In devoting herself to the service of others, she led a very meaningful life.”

Extending his heartfelt condolences to the family and loved ones of veteran leader Sushma Swaraj, Tibetan President Dr Lobsang Sangay said he was deeply saddened to hear that the veteran Indian leader and staunch supporter of Tibet is no more.

President Dr Sagay wrote, “I am deeply saddened to learn of the sudden demise of the former External Affairs Minister, Sushma Swaraj Ji. On behalf of the Central Tibetan Administration (CTA) and the Tibetan people, I extend my heartfelt condolence to you and your family, the Indian government and the people of India as they mourn the loss of the veteran leader."

"I had the privilege of meeting her in 2011. In our hour-long interaction, she expressed her sympathy for the Tibetan people and respect for His Holiness the Dalai Lama. She also advised me on leadership, oratory and on how to protect my throat to give booming speeches," said Dr Sangay.

"She was a staunch supporter of the Tibet cause, raising the issue of Tibet in the Indian Parliament. During her address at the Rajya Sabha in 2017, Sushma Ji assured that India would not be a “mute spectator” to the atrocities in Tibet and that there will not be a quid pro quo with China when it comes to the “sufferings” of the Tibetan people," President added.

He said that "Sushma Swaraj Ji was one of the prominent political leaders of her time and a leader widely admired by the people for her kind and empathetic leadership. As we mourn her passing, her legacy would live on and continue to be a source of inspiration for the generations to come”.

The Tibetan President concluded by saying that the Tibetans across the globe pays deepest condolences, and our thoughts and prayers are with you and your family in this time of grief.

In the condolence letter, he expressed his deep sadness by the untimely demise of Smt. Sushma Swaraj, which is a huge loss for the nation. Speaker wrote “She is an astute, caring, dedicated and effective leader in today’s world. Her contribution to the Indian politics, nation, and people during her tenure as the member of the Parliament, first female Chief Minister of Delhi and most recently, as the Minister of External Affairs of India is unparalleled.”

“She was a staunch supporter of the Tibet cause. We are truly grateful for Sushma Ji for raising the Tibet issue in the parliament and for her strong statement on India not sitting as a mute spectator on atrocities in Tibet,” Speaker said, adding: “It is an irreparable loss not just for the people and government of India but also the Tibetan movement.”

Diplomats of about 50 countries across the world at the United Nations have written separate condolence messages for former External Affairs Minister Sushma Swaraj who died of a cardiac arrest, on August 6, 2019.