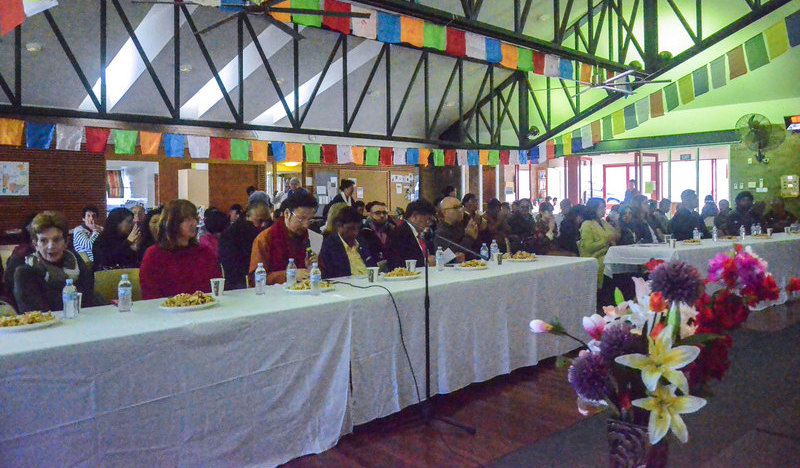 Celebrations of His Holiness the Dalai Lama’s 84th birth anniversary at the Uniting Church in Campbelltown, NSW, Australia, on July 6, 2019. Photo: TPI/David Thomas

Campbelltown, NSW — The 84th birthday of the spiritual leader of Tibet, His Holiness the Dalai Lama celebrated by Campbelltown Tibetan community in Australia on Saturday, July 6, 2019 for the first time, displaying gorgeous colourful and symbolic Tibetan prayer flags.

Around 200 Tibetans and supporters have gathered at the Uniting Church in Campbelltown, a suburb and major town centre in the metropolitan area of Sydney, New South Wales, Australia and there were songs, traditional dances and other activities to honor their spiritual leader, His Holiness the 14th Dalai Lama.

Jigme Dorjee extended a warm welcome to everyone including guests and audience members on behalf of the Tibetan community in the City. He also offered his heartfelt gratitude to the crowd for their support and for coming together to celebrate the 84th birthday of His Holiness the Dalai Lama in the City for the first time.

When Dorjee and his wife Dolma Tsomo arrived in Australia around two decade ago, they were among the first Tibetans to settle in Australia. But on Saturday, as they looked out over a gathering of nearly 100 Tibetans in Campbelltown alone with a continually growing population over the past few years.

In his address chief guest Councillor Rey Manoto thanked the Tibetan community for warmly welcoming him and Councillor Masood Chowdhury to celebrate His Holiness the Dalai Lama's birthday day and congratulated them on behalf of the Campbelltown City Council. He offered birthday greetings to His Holiness the Dalai Lama on behalf of the City Council.

"It is an honor for me to be here, representing the Campbelltown City Council. In Campbelltown, we have pride of our large environment —multicultural community which made up of many beliefs and people," Manoto started his speech by paying respect to the Aboriginal and Torres Strait Islander people, who are the traditional owners of the land.

"The strength of the City and the strength of community spirit is varying and its diversity. Today, I have witnessed your great faith and passion for the Dalai Lama and I have unclaimed of your beautiful culture, dances and prayers. Therefore, the Council is proud to present the people of this wonderful community and I am encouraging you to continue on your culture and also your language— passing on to your next generations," he added.

Sana al-Ahmar who was representing the MDSI has shared her experience and thoughts working with the Tibetan community in Campbelltown. While praising the preservation of the Tibetan cultural heritage by the new community, she said that the MDSI was glad to organise a Tibetan New Year (Losar) event for the first time in the City in February this year.

Dungyud Tulku Rinpoche has reminded the crowd of His Holiness the Dalai Lama's message on peace and on cultivating compassion for others. "If you can't help them, at least don't hurt them." He talked about the importance of compassion for others, while highlighted the benefits from the cultivation of warm-heartedness and compassion and the need to tackle disturbing emotions to maintain the peace of mind.

The event observed a minute’s silence in memory of all those Tibetans who have sacrificed their lives for the cause of Tibet, and those still suffering brutal repression under the Chinese government in Tibet. Saturday's celebration also included a moment for singing the Tibetan and Australian national anthem. It was a special day, members of the Tibetan community feel that reminded them of so many things they're grateful for — including the multicultural community and its diversity in Campbelltown that has made them feel welcome.

The birthday celebration programs for His Holiness was moderated by Rigzin Tenga and Tenzin Kunsel, a dancer, and a singer respectively. The event was concluded with words of thanks expressed by Sangay Dorjee on behalf of the community, followed by traditional round dancing.

Similar events celebrating His Holiness the Dalai Lama's birthday were held in several Australian cities, including Blue Mountain, Dee Why, Newcastle, Melbourne and Canberra, and major cities in Europe, America, Africa, and Asia, with organisers, estimated that tens of thousands of Tibetans and supporters attended the worldwide celebrations.