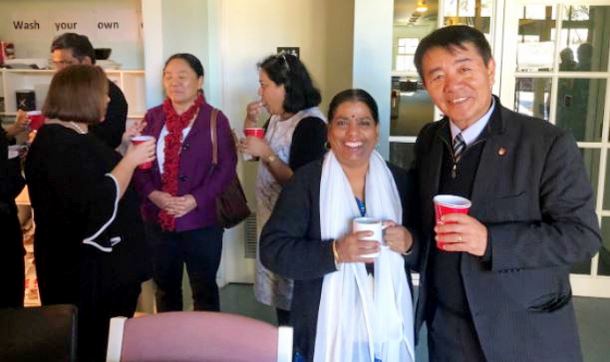 Representative Lhakpa Tshoko participates in the 30th anniversary of BODHI Australia at the Australian National University, in Canberra, the capital of Australia, on June 22, 2019. Photo: Office of Tibet, Canberra

Canberra — Representative of His Holiness the Dalai Lama in Australia attended an event celebrating the 30th anniversary of the NGO "Benevolent Organisation for Development, Health and Insight (BODHI) Australia", held at the National Centre for Epidemiology and Population Health, Australian National University, in Canberra, the capital of Australia, on June 22, 2019.

In his address to the event Lhakpa Tshoko, Representative of His Holiness the Dalai Lama for Oceanic and South East Asia (office based in Canberra, Australia), 'sincerely acknowledged their benevolent humanitarian work and congratulated BODHI Australia on its 30th anniversary and read a message from the spiritual leader of Tibet, His Holiness the Dalai Lama,' according to the Office of Tibet, Canberra.

His Holiness wrote,* “*As a Tibetan, I am grateful for your project to benefit the Tibetan people, both in Tibet and in the exile community. The two co-founders, Susan Woldenberg (late) and Colin Butler, have taken the principles of altruism in undertaking their activities. I also very much appreciate the dedication of the work of BODHI’s volunteers and partners.”

As an NGO, BODHI was founded in 1989 under the patronage of His Holiness the Dalai Lama by Professor Colin Butler and his late wife, Susan Woldenberg Butler. BODHI Australia has supported small scale development projects in India, Bangladesh, Thailand, and Tibet. BODHI has assisted Tibetans living in South India including in Mungod and Kollegal, and also assisted nomads in Tibet through a microcredit scheme called revolving sheep bank in the 90s.

The NGO has also worked with followers of Dr Ambedkar, Chakmas and the Youth Buddhist Society in Uttar Pradesh, India. They are currently helping Bahujan Hitay Pune Project (NGO) based in Maharashtra under Karunadeepa, who spoke during the celebration as one of the main speaker. They are working hard towards the upliftment of needy people’s health, Education with special focus on the empowerment of poor women.