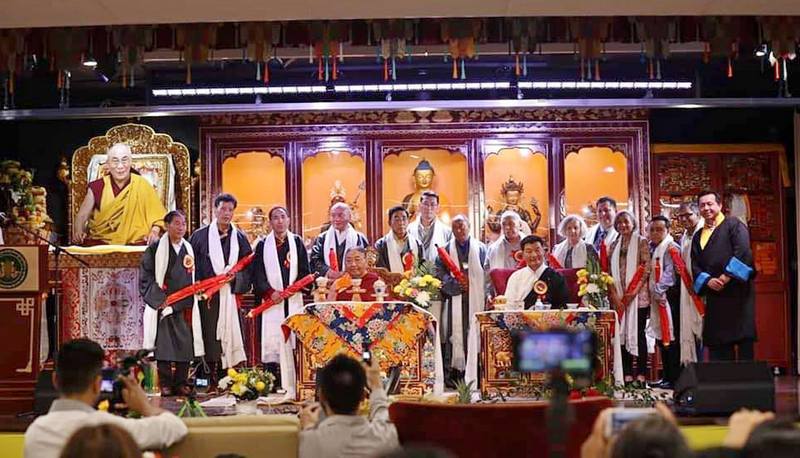 New York— 'Every Tibetan living in free democracies should take upon themselves to strengthen Tibet movement in their respective host countries,' said Dr Lobsang Sangay, the President of the Tibetan-government-in-exile, officially known as Central Tibetan Administration (CTA), based in Dharamshala, India.

The inauguration was followed by the consecration of the community centre by Sakya Gongma Rinpoche.

'Calling it an auspicious occasion, Dr Sangay congratulated and acknowledge the support of the sponsors and the unity and hard work of the members of the Tibetan community that saw the successful completion of the community centre,' said Tenzin Lhakmon, Communication Officer, Sikyong Office.

In his address Dr Sangay expressed that the successful completion of the community centre demonstrates the potential of Tibetan community when working with unity. This oneness, he said has be stressed upon by His Holiness the Dalai Lama as early as in 1959.

As the democracies of the world weigh on the influence of China and that of “Socialism with Chinese Characteristic”, we Tibetans should all the more be prudent and more involved towards furthering the Tibet cause.

As China attempts to thwart representation of Tibetan cause at the global platforms through its influence, every Tibetan living in free democracies should take upon themselves to strengthen Tibet movement in their respective host countries.

As addressed by Sakya Gongma Rinpoche and other guest speakers in unison at the function, Dr Sangay iterated the importance of preserving the Tibetan identity while living in diaspora. He further added the significant role a parent play in inculcating the sense of Tibetan identity and culture with language as it core.

The ceremony also saw the adjuration and official naming of the street outside the centre to Tibet Way.

Also present at the event was Jimmy Van Bramer, Council Member of the 26th District, Ngodup Tsering, Representative of OOT North America, North America Members of Tibetan Tibetan Parliament-in-Exile Tsewang Rigzin and Pema Chagzoetsang and sponsors. The gathering saw the attendance of around 2000.