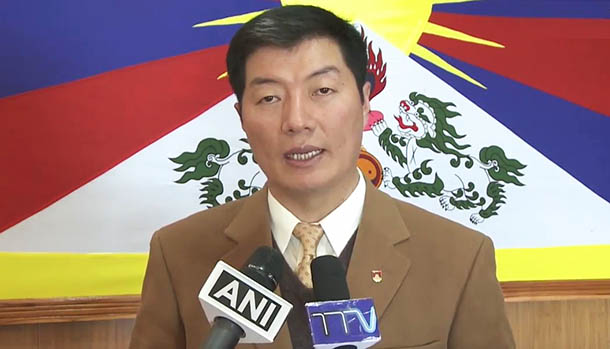 President Dr Lobsang Sangay thanks the U.S Government for the passage of Reciprocal Access to Tibet Act into Law, Dharamshala, India, on December 20, 2018. Photo: CTA

Dharamshala, India — In a press release in Dharamshala, India ahead of his visit to South Africa, president of the Tibetan government in-Exile, Dr Lobsang Sangay said: “I am delighted and deeply honoured to be in South Africa again, the country that inspires six million Tibetans to continue their non-violent fight for human rights, democracy and freedom.”

Dr Lobsang Sangay, President of the Central Tibetan Administration has visited South Africa for the second time to attend SONA 2019 as guest of the Democratic Alliance.

While in South Africa from 5-9 February 2019, he met members of Parliament of various political affiliations, build new relations and interact with academia, media and friends of Tibet.

Dr Sangay received his PhD from Harvard Law in 2004, and he is an expert on International Human Rights Law, Democratic Constitutionalism and Conflict Resolution. He organized several major conferences between Chinese, Tibetans, Indians and Western scholars on China and Tibet, including two unprecedented meetings between the 14th Dalai Lama and Chinese scholars in 2003 and 2009 at Harvard University.

In 2011, His Holiness the Dalai Lama seceded and transferred his political power to a democratically elected government in the Tibetan Diaspora. Dr Sangay is the first elected leader of the Tibetan people and is currently serving his second term as their President.

Dr Sangay has been travelling all over the world campaigning for support to resolve the Tibetan Issue with China through dialogue which will guarantee genuine autonomy for Tibetans within the Chinese constitutional framework. Tibet existed as an independent country until the Chinese Communist occupation in 1959 which resulted in the Dalai Lama fleeing his homeland and seek political asylum in India.

“The Chinese first came to Tibet in the name of development and solicited cooperation from the local Tibetan government and officials for building roads. Once the roads were completed, they brought in tanks, guns and soldiers, and thus Tibet was occupied. This is our experience in dealing with the Chinese and we want to share it with our friends in South Africa and other African countries,” says Dr Sangay.

When asked how he sustains hope for peaceful restoration of human rights for Tibetans, he says: “Mr Mandela was locked up for 27 years, and no one ever thought that his desperate situation on Robben Island and other South Africans will ever change. Mr Mandela and the remarkable and enduring spirit of South Africans who longed for human rights and freedom, your story, your history keeps us going.”

“I remember listening to Nelson Mandela and President Ramaphosa many years back when I was at Harvard, talking about the extraordinary and progressive South African Constitution. Their fight, their hope, their dignity inspires me.”

Dr Sangay says 'South Africa can become the moral nexus of the world again. He wishes all South Africans a fair and peaceful election.'