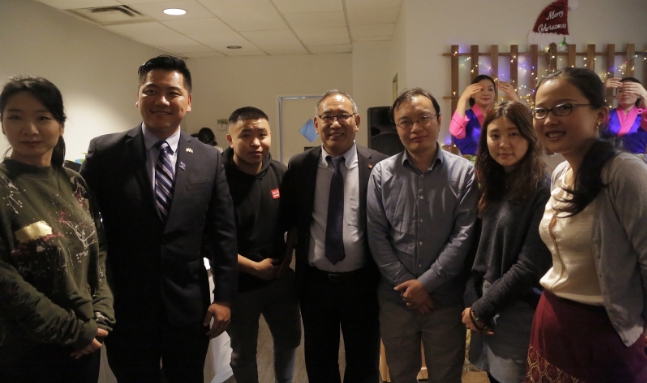 New York— 'Tibet remains firmly committed not to seek separation rather autonomy for the people of Tibet— based on His Holiness the Dalai Lama’s Middle Way Approach, which seeks genuine autonomy for the Tibetan people within the framework of the constitution,' the North America representative of His Holiness the Dalai Lama said during a gathering of local leaders of the Tibetan community and well-known Chinese scholars in Washington DC.

His remarks came during a Sino-Tibetan exchange dinner event on 15th December, which took place in the melting pot of the New York city— in Elmhurst, Queens. The event was organised by The Office of Tibet, Washington DC and attended by eminent leaders from both the communities of Tibet and China which included more than 70 Chinese supporters.

The meet fundamentally was based on the principle that protection and development of the unique Tibetan identity in all its aspect serves the larger interest of humanity in general and of Tibetan and Chinese people in particular, according to Chinese Liaison Office, OOT Washington DC.

Ngodup Tsering, as a representative of the Office of Tibet, DC opened his remarks by commenting that Central Tibetan Administration aims to mainstream the Chinese outreach efforts and urged for support from all the participants present. Tibet remains firmly committed not to seek separation rather autonomy by the Middle Way Approach i.e. secure genuine autonomy for the people of Tibet within the scope of Constitution of People’s Republic of China.

Recalling the 30 years of long forgotten memory of friendship between China and Tibet, Beijing Spring editor Hu Ping said that he has started a dialogue with the young Chinese people to help in resolving the issue of Tibet by educating them about the Tibetan culture and their way of living.

Chen Poking, a famous political commentator congratulated the community of Tibet in the unanimous passing of the bill of Reciprocal Access to Tibet Act by the US Senate and which now only awaits the President’s consent. He also remarked that the nest year marks the 60th anniversary of the peaceful uprising of Tibet in China and therefore participation by all the Tibetans and the young Chinese people is important in the pursuit of an autonomous Tibet. He concluded his talk with prayers for “the long life of His Holiness, even longer than the Chinese communist party”.

All the leaders and members present made strong commitments towards the autonomy of Tibet and agreed that a mutually agreeable mechanism is needed for the success of the Middle Way Approach of the CTA.