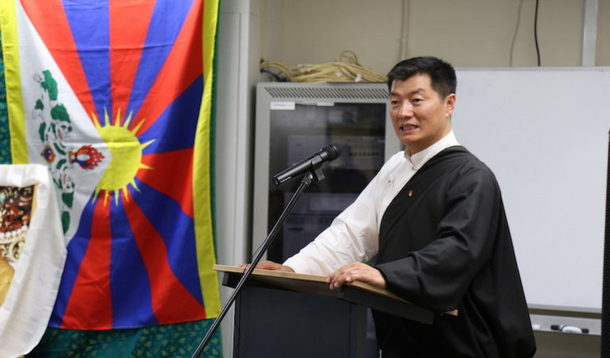 Canberra — This past Thursday, President Dr Lobsang Sangay of the Central Tibetan Administration met with the local Tibetan community in Canberra, Australia. He condemned the regionalism and groupism as a serious threat to the fabric of Tibetan unity.

The executive members of the Tibetan community Sydney, New South Wales reportedly said they will not celebrate the 29th anniversary of the conferment of the Nobel Peace Prize on His Holiness the Dalai Lama due to president Nigan and a few of his colleagues bearing a personal grudge against the Central Tibetan Administration.

The cancellation was announced by a few executive members of the Tibetan Community in Sydney Metropolitan Areas, claiming fear of infighting among the Tibetan people in the area after some Tibetans have reportedly said they would protest against the Tibetan president.

The Sydney Tibetan community, comprised primarily of former political prisoners, was encouraged by President Dr Sangay to be a prominent advocate for the Tibetan struggle. By highlighting the community’s experiences as a primary witnesses to China’s systematic oppression and disregard for human rights. “China’s here in Australia as well. We are witnessing its growing influence in all public spheres. Similarly, in the West and Europe, China has demonstrated the same techniques of influence through political, economic and academic hubs.”

In his address, President Dr Sangay urged “All Tibetan brothers and sisters to eschew regionalism and parochialism and pledge to unite under the leadership of His Holiness the Dalai Lama to fulfill the aspirations of Tibetans inside Tibet.” He claimed that “Unity is our ultimate strength; it is crucial to the success of the Tibetan movement,” for all Tibetans.

Further, President Sangay called on all Tibetans to act on their moral responsibility to continue to advocate for the Tibetan non-violent movement and raise global awareness of China’s authoritarian regime, human rights violations, and political and intellectual censorship on Tibet.

The recently elections of the controversial Sydney Tibetan community took place in Dee Why seem undemocratic, which have included extremely regionalism against values of diversity and openness. Some of the former executive members called for a boycott of the first election, warning that they wouldn’t recognise the result, until receiving a clarification to the allegation against them. Other executive members reportedly accused them of signing a petition misinterpreted the Tibetan government in-Exile and saying their actions totally against the organisation's rules.

Those who boycotted the first election reportedly have used some important community initiatives in which they have involved with like school and school bus warning that these initiatives may not be carryout. Later the newly elected members announced that they have resigned for the sake of unity. However, the effect of the regionalism can be seen in both elections as only members from two regions were elected unlike the first election. Many did not participate in the last election for a variety of reasons, including travel distances.

There are about 2,300 Tibetans living in Australia. Around 700 Tibetans live in various suburbs of Sydney including Dee Why, Newcastle, Blue Mountains and Campbelltown. Other areas with Tibetan population include Melbourne, Canberra, Brisbane, and Perth.