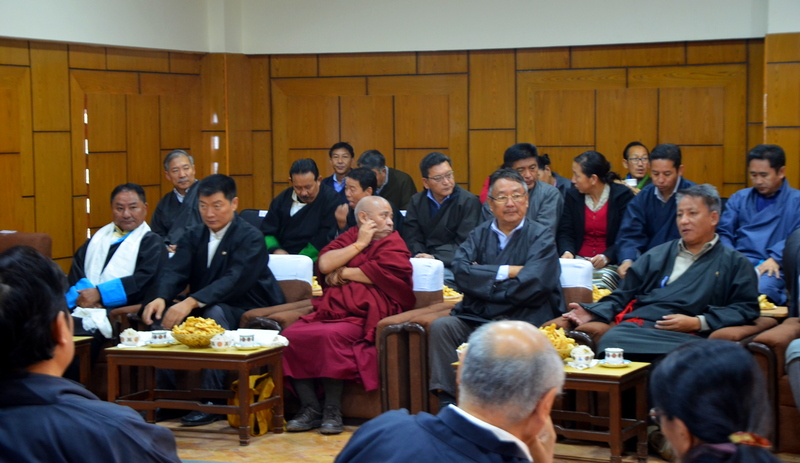 Top officials during the swearing-in ceremony of new Speaker of the Tibetan parliament in Dharamshala, India, on Dece,ber 1, 2018. Photo: TPI/Divya Pandey

Dharamshala, India — Pema Jungney, one of senior Tibetan lawmakers sworn in as the new Speaker of the 16th Parliament-in-Exile by the Chief Justice Commissioner Kargyu Dhoundup. The ceremony was held at T.Building of the Central Tibetan Administration at Gangchen Kyishong.

After the pledge, the new Speaker commented on the current state of affairs saying that ‘I have been chosen by the people and so I will always work for them’ and added that the ‘the Tibetan Parliaments aim has always been to work together and with the support of the Indian Parliament, as we are living in India and thus is necessary for our progress.’

The ceremony was attended by the top administrators of CTA, namely, The president of Central Tibetan Administration Dr. Lobsang Sangay; Chief Justice, Commissioner Deputy Speaker of Tibetan Parliament-in-Exile, Justice Commissioners, Kalons, The head of the autonomous bodies and all other eminent members.

It is the second time that the Speakers post had to shared between two members of parliament, who got equal number of votes in the election. The first time this happened was In 2006, The 14th Parliament, when two contenders Late Karma Choephel and Penpa Tsering had been Joint Speakers.