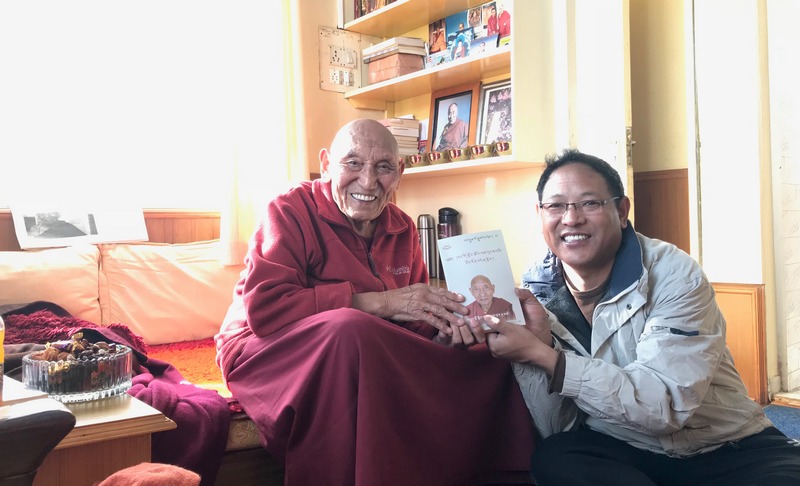 Dharamshala, India — Tibetan freedom fighter Palden Gyatso passed away at Delek Hospital in the Himalayan town of McLeod Ganj, in northern India, on Friday morning, November 30, 2018. He was 87. He was reportedly suffering from physical weakness and liver-related complication over the past few months.

The Buddhist monk spent 33 years imprisoned by the communist Chinese and drew deep on his Buddhist practice to survive his brutal treatment. He escaped to India and travelled around the world to tell his story.

Shortly before news of Palden's passing broke President Dr Lobsang Sangay expressed his condolences saying “Many around the world were greatly moved by the indomitable spirit and valour with which he fought for the dignity and freedom of the Tibetan people.”

“I have known him for twenty years and had the opportunity to interview him for the report by International Commission of Jurists titled ‘Tibet: Human Rights and the Rule of Law’. Later he was awarded the John Humphrey Freedom Award by the Canadian human rights group, Rights and Democracy," President said.

"I also had the privilege to assist him as a translator on his speaking tour of New England and the US in the 2000s. I have also shared a speaking panel with him,” Dr Sangay said, adding “Ven Palden Gyatso devoted his entire life to the cause of Tibet. Let us all be inspired by his lifelong commitment and thereby pledge to strengthen the Tibetan freedom struggle.”

Two reporters from the Tibet Post International met him at his residence in Dharamshala, India in January this year. During an hour-long meeting with Palden discussed a range of issues concerning Tibet, particularly his experiences of the Chinese betrayals and injustices in occupied Tibet he has witnessed.

Speaking to the Tibet Post International, he said he has a great hope for the younger generation of Tibet and their ability to learn and change. 'No matter whether it's government or individual, we must respond to all the Chinese Communist Party's official propaganda outlets on Tibet aimed at persuading the people of Tibet are wrong and that China is always doing the right thing.' He said 'we must do that for the sake of our future generations who will continue the freedom movement to regain their lost freedom and dignity.'

Born in the Tibetan village of Panam in 1933, Gyatso was ordained as a Buddhist monk during the Chinese invasion of Tibet. Gyatso was arrested in 1959 by Chinese authorities and incarcerated for peacefully demonstrating against the invasion. He was forced to participate in “re-education” classes, starved, endured hard labour, and was brutally tortured.

Released from prison in 1992, Gyatso fled to India and brought with him some of the instruments of torture used against him as proof of the abuses of the Chinese regime. Gyatso has dedicated his life to raising awareness about the plight of the Tibetan people. He has testified before the United Nations and the U.S. Congress. His flagship memoir “Fire Under the Snow” published in 1998 was translated into 28 languages and sold more than a million copy.

His other memoir, “The Autobiography of a Tibetan Monk,” was published in 1997. He was the subject of the 2008 film “Fire Under the Snow.” The end of Palden’s first prison term in 1979 coincided with a period of political liberalisation. Palden returned to the Drepung monastery where, amid crumbling buildings, former monks were trying to revive some of its former life, although they were still under tight Communist control.

Palden used his brief taste of relative freedom to write wall-posters, which were posted in Lhasa, demanding independence for Tibet and denouncing the destruction the Chinese had caused.Before long Palden was re-arrested and, now classified as a hardened opponent of the regime, was given another long sentence.