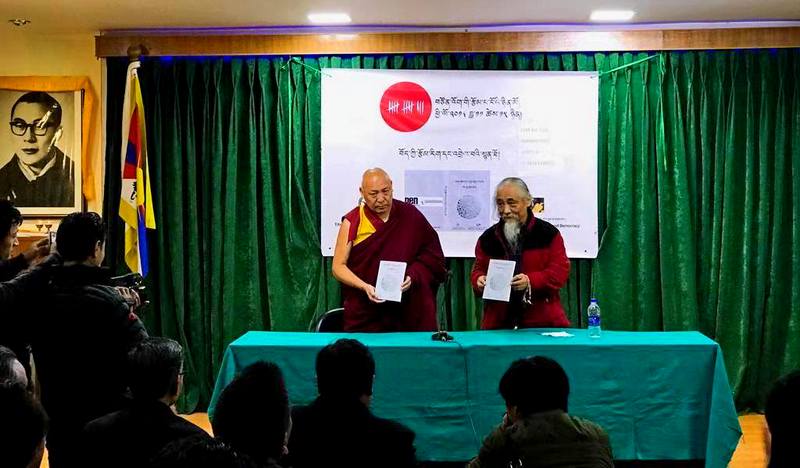 Dharamshala, India – A special event organised by exiled Tibetan organisations in Dharamshala, India Thursday commemorated Day of the Imprisoned Writers’ with release of special report on censorship and discrimination faced by Tibetan writers in Tibet.

Tashi Tsering, Director of Amnye Machen Institue (AMI) and Geshe Lhakdor, Director of the Library of Tibetan Works and Archives (LTWA) were among the guests at the event in Dharamshala, India, on Thursday, November 15, 2018.

This year’s event for the Imprisoned Writers in Tibet, also organised by the Tibetan Centre for Human Rights and Democracy in collaboration with Tibetan Writers Abroad Pen Centre was held at the conference Hall of Library of Tibetan Works and Archives (LTWA) in Dharamshala. A report in Tibetan language titled ‘Tibetan literature: In the Web of Censorship and Discrimination’ was also released by guests during the event.

A former imprisoned Tibetan writer, Theurang who wrote the poem titled Prisoner in Hell was quoted in the report: “In the decree declared in hell, every one of those people is considered a criminal and imprisoned with both hands and legs shackled, the name of their crime is the love for freedom”.

"The release of the report comes at a time when exercising the right to free expression is penalised with alarming regularity and Tibetan literature is subjected to systematic practice of Chinese state censorship and discrimination," the organisers said in a statement.

They claimed that "A comparative study of the state of Tibetan literature before and after the Chinese invasion is also covered in the report. It also comprises select writings and poems by imprisoned writers in Tibet, censored and banned terms, books and writings in Tibet."

The report was unveiled by Mr Tashi Tsering and Geshe Lhakdor in the presence of other guests including Naga Sangay Tendar, Head of Culture Research Department of LTWA, Passang Tsering, Principal of the College for Higher Tibetan Studies at Sarah, Ju Tenkyong, Editor of Monlam Dictionary, Sonam Gyaltsen, History Teacher at College for Higher Tibetan Studies, Mansher Lokdun, Co-ordinator of the writers in Prison Committee of Tibetan Writers Abroad Pen Centre and more than fifty people were among the attendees.

Speaking to the gathering, Tashi Tsering has criticised about the lack of freedom of writers in every community and every society in the world today except few countries like Sweden, Denmark and Norway. "Of course, there are always difficulties faced by writers all the time no matter whether its a socialism or capitalism. We must never forget all historical events already occurred," he added.

China claims Tibet has been part of its territory, but Tibetans say their country is an independent nation for centuries. The Communist regime began their invasion of Tibet in 1949, reaching complete occupation of the country in 1959. Since that time, more than 1.2 million people, 20% of the nation's population of six million, have died as a direct result of China's invasion and occupation.