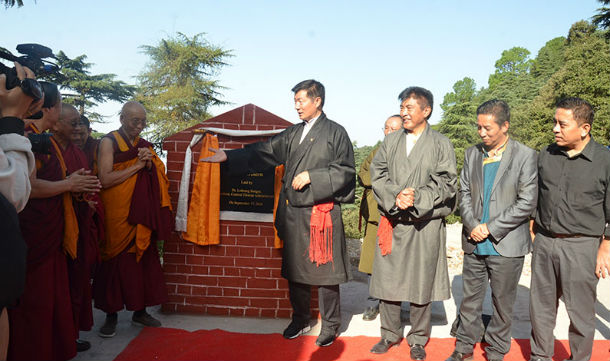 Dharamshala, India — On September 18, 2018, an auspicious day in the Tibetan lunar calendar, The Tibetan Institute of Performing Arts (TIPA) laid the foundation of its new auditorium, which was long due.

The ceremony began at 7 am and was graced by the presence of President Dr Lobsang Sangay. The president laid the foundation stone and marked the beginning of the project. He was observed participating in the prescribed rituals to purify the land and evade all the negative energy.

This was followed by a breakfast organised by TIPA itself and then a traditional dance performed by the TIPA members for the appeasement of the Gods and Goddesses and purpose of prayer. The president was seen joining the group dance as well and enjoying himself with the people. He then addressed the people and the members of the organisation and talked about when it was found in 1959 by His Holiness the Dalai Lama with the objective of preserving Tibetan culture; and has now, with the effort and hard work of the teachers and devoted members, grown to become a successful organisation that caters a large audience and has earned name throughout the world.

He said that the Central Tibetan Administration (CTA) has donated 600 chairs to the TIPA new hall along with the support and donations of Norsang foundation which is currently based in Switzerland. To support the growth and preservation of the Tibetan culture and traditions, the cabinet is extending help. He also mentioned that next year will be the 60th anniversary of TIPA and hopefully with the hard work and dedication of the staff, TIPA will have all the necessary resources and will be able to host the event in the new auditorium.

According to the Secretary of TIPA, Mr WangduTsering Pesur the construction of this auditorium was overdue, and they have been needing a new, better and bigger auditorium for a long time now, for their performances. He said, “the purpose of setting up this auditorium (is that) actually the old auditorium can hold up to 500 audience (members) but the structural design, seating arrangement for audience and the stage itself is very standard”. “hence, we needed to have a better auditorium, bigger so that we could perform in a way that its more presentable and the audience can enjoy a good performance with a good lighting system, acoustics, sound system...” he added, describing the main idea and agenda behind the new auditorium being constructed.

Mr Wangdu also talked about the time of construction of the new auditorium “the construction is scheduled to start within (this) month” he said. He added “next year according to the Tibetan lunar (calendar) is going to be an obstacle year for His Holiness the Dalai Lama, hence we (are told) by the cabinet that the construction work has a lot of damage of environment also, and on insects and animals, therefore there is strict direction (from cabinet) that therefore we should not engage in any of these construction activities next year”. “Hence, we’ll have to finish this project before the end of this lunar year. That is before February”, he said, ready for the challenge.