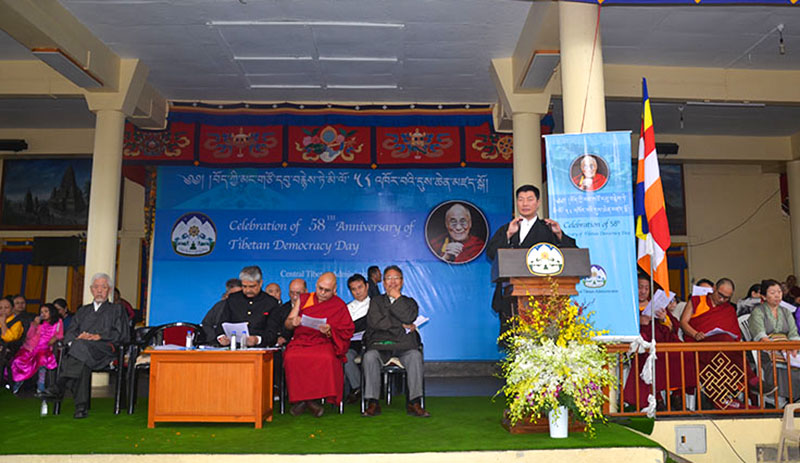 Dharamshala, India — 'In 1950s, His Holiness the Dalai Lama envisaged a modern system of governance, which would represent the ordinary citizens of Tibet, however, the People’s Republic of China obstructed the reforms with the illegal occupation of Tibet,' President Dr Lobsang Sangay said in a statement commemorating the 58th anniversary of Tibetan democracy, which was bestowed upon them by His Holiness the 14th Dalai Lama.

The Tibetans living-in-exile celebrated the 58th anniversary of Tibetan Democracy Day in Dharamshala city, India on Sunday, September 2, 2018. Thousands of people, including Buddhist nuns and monks attended the function at the main temple in Dharamshala along with a host of other senior functionaries. Senior functionaries and supporters took part in the celebrations.

President Dr Lobsang Sangay talked about a number of issues ranging from the gross violations of human rights in Tibet, the resurgence of immolation protests in Tibet to the 1949 China's illegal occupation of Tibet and the Middle Way Approach — seeking "meaningful" or "genuine autonomy" for Tibet.

Speaking on the development of Tibetan democracy in exile: "At a time when the future of democracy is under threat around the world, we are gathered here today to commemorate and celebrate the 58th anniversary of Tibetan democracy, which was bestowed upon us by His Holiness the great 14th Dalai Lama of Tibet. I, on behalf of the Kashag and 6 million Tibetans, offer my deepest gratitude to His Holiness."

"From a young age, His Holiness envisaged a modern system of governance, which would represent the ordinary citizens of Tibet. The process towards democratization had been initiated with the creation of a Reforms Committee in early 1950’s; however, the People’s Republic of China obstructed the reforms with the illegal occupation of Tibet," President said in the statement.

In the statement, the Kashag (Cabinet) reiterated it's praise for His Holiness the Dalai Lama's efforts and achievements in promoting democratic values and steering the democratic system of CTA through timely administrative and legislative reforms.

"When His Holiness was forced into exile, he did not leave his dream behind. One of the first pronouncements made by His Holiness after arriving in India was to ensure that a democratic system of governance would be born in exile. And on this very day in 1960, the first meeting of the Tibetan parliament-in-exile was held with members representing each of the three traditional provinces and the four major schools of Tibetan Buddhism. In 1963, women representative were included in the Parliament and later in 1977, the Bon religion also came to be represented," the statement reads.

"The democratization saw the adoption of the Charter, the empowerment of the parliament to make laws and elect the Kashag and timely amendments were made for the direct election of the Sikyong. With the formation of the Tibetan Supreme Justice Commission in 1992, the three pillars of democracy were established," Dr Sangay said.

"Together, the Parliament, the Kashag, and the Supreme Justice Commission serve checks and balances to keep our democratic governance on even keel. In addition, an independent Office of the Auditor General, a Public Service Commission, and an Election Commission ensure accountability and transparency," it said.

"In 2011, His Holiness devolved all his political authority to a democratically elected leader despite the impassioned appeals by the Parliament and the Tibetan people to stay on as the nominal head of state, thereby completing transition to a secular democracy," the statement added.

Condemning the gross and systematic violations of human rights and fundamental freedoms in Tibet, the President says: "Our unique democracy-in-exile reflects the true aspirations of our brothers and sisters inside Tibet and serves as a spokesperson for the struggles under China’s illegal occupation."

"The world’s most reputable independent watchdogs, including Human Rights Watch, Amnesty International, and Freedom House, have constantly exposed the deteriorating human rights situation and religious freedom in Tibet. In addition, at the US State Department’s first-ever Ministerial to Advance Religious Freedom this past July, Mike Pence, Vice-President of the United States said: “For nearly 70 years, the Tibetan people have been brutally repressed by the Chinese government” and that the Tibetan people’s “fight to practice their religion and protect their culture still goes on.”

"Indeed, religious persecution in Tibet continues to persist. Recently, the Chinese government increased deployment of paramilitary and police force in Lhasa during Shoton, the Tibetan Opera festival, and the parents of the students at Lhasa Middle School were coerced to sign contractual agreements not to let their children participate in any religious activities during summer holidays. In Zachuka district of Kham, young monks and nuns were ordered to leave their monasteries and nunneries and forced to join Communist Party-run schools.

"The Chinese government’s widespread interference in religious practices of Tibetans are in clear violations of the numerous policies on Tibet created in the 1980’s which recognize the special characteristics of Tibet’s religious identity and customs. For example, Document no. 31 states that, “all Central government guidelines, policies, instructions and regulations could be refused or adapted if they did not conform to the practical conditions in Tibet.”"

"China’s repressive policies in Tibet blatantly contradict President Xi Jinping’s own words asserting that Buddhism helps promote the Chinese culture. Other prominent Chinese leaders, such as Premier Li Keqiang and Wang Yang, Chairman of the Chinese People’s Political Consultative Conference National Committee’s recent trips to the so-called Tibetan Autonomous Region have shown that systemic efforts are being made to use Buddhist leaders as tools to assimilate Tibetans into Chinese. Wang Yang specifically asked Buddhist religious figures to “be courageous to battle all separatist elements, in order to further protect the national reunification, ethnic unity, and social stability.”

The right to religious freedom is an inalienable right affirmed by the 1948 Universal Declaration of Human Rights, which declared, “Everyone has the right to freedom of thought, conscience, and religion.” It is time that the international community calls on the Chinese government to adhere to the legal instruments it has signed and stop committing grave human rights violations with impunity."

In Kashag's statement, President said: "Under the leadership of His Holiness, Central Tibetan Administration is committed to preserving our identity and pursuing our dignity."

"After years of planning, in 2017, the Kashag launched the Five-Fifty Vision premised on His Holiness’ advice to “hope for the best and prepare for the worst.” The vision aims to maximize efforts to resolve the Tibet issue in 5 years based on the Middle Way Approach, while ensuring CTA’s resilience to sustain the Tibetan freedom movement for the next 50 years if need be. Our plan is not to stay in exile for another 50 years; instead, our plan is to plan for the next 50 years if necessary.

The first segment of the Five-Fifty Forums was held in October 2017 where experts, scholars, strategists and old friends of Tibet gathered to deliberate on how to shape Tibet’s political future. Last month, a Five-Fifty Youth Forum was held where 100 young participants from 15 different countries came under one roof to brainstorm on the ways to strengthen the Tibetan freedom movement. This month, we will hold the third segment on building “A Resilient Tibetan Community”, which will investigate and find innovative solutions to cultural preservation, education, economic development, and health care."

Dr Lobsang Sangay, has reiterated his administration's commitment to the 'Middle Way' approach and said that Tibet does not seek independence from China. "Further, the Kashag has put all efforts to continue the dialogue process with the Chinese government through the Middle Way Approach, which seeks, not independence or assimilation, but a genuine autonomy for the Tibetan people within China’s Constitution. Since 2014, several initiatives have also been taken to educate the general public and train NGOs on the Middle Way policy."

The statement also called on the Chinese government to resume dialogue with representatives of His Holiness the Dalai Lama to resolve the issue of Tibet. "Kashag and the parliament have consistently lobbied leaders in India and around the world for their support for a peaceful resolution of the Tibet issue. In 2014 and 2016, the White House officially applauded and supported the Middle Way Approach. We welcome such statements of support and call on China to resume formal dialogue with the envoys of His Holiness the Dalai Lama."

Speaking about the devolution of political powers by His Holiness the 14th Dalai Lama to a democratically elected Tibetan leadership, the statement said: "This year marks 7 years since the devolution of political authority by His Holiness. It is crucial to remember that with democracy come responsibilities. Freedom of speech and freedom of expression do not mean the freedom to spread misinformation and cause disharmony. Using the democratic rights to disrupt our unity fundamentally goes against the democratic vision of His Holiness that began from inside Tibet."

"We must never forget the Na-gaen Thuwoche, the great oath taken by Tibetan leaders on behalf the Tibetan people in Bodh Gaya 60 years ago. They made a pledge that under the leadership of His Holiness the 14th Dalai Lama, an iron-ball like unity would be the foundation of the Tibetan community.

Ultimately, for our democracy to thrive, it is the responsibility of every Tibetan to be informed and prevent any attempt to disrupt our community and harmony. The Kashag has and will continue to implement the three guiding principles of unity, innovation, and self-reliance, and I urge every Tibetan to follow suit.

On the occasion of Tibetan Democracy Day, the Kashag has expressed their appreciation for the assistance given by Tibet Supporters and Tibet Support Groups around the world. "Taking this opportunity, I want to thank old and new friends of Tibet who have stood by us in this freedom struggle. I especially want to thank the government of India and its people for according the utmost respect to His Holiness and for generously hosting Tibetans-in-exile."

"Let us unite–stronger than ever–to ensure that the democratic vision of His Holiness the Great 14th Dalai Lama of Tibet continues to flourish. Let us pray together for the long life of His Holiness and rededicate ourselves in order to fulfill the aspirations of Tibetans inside Tibet," the statement concluded.