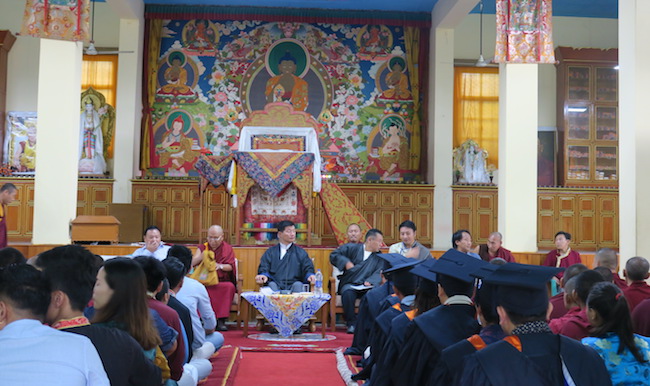 Dharamshala, India — The College for Higher Tibetan Studies at Sarah, near Dharamshala in the Northern Indian state of Himachal Pradesh marked its 20th anniversary on Monday, August 14, 2018.

The Chief Guest of the function was Dr Lobsang Sangay, President of the Central Tibetan Administration who praised the decades-long service of the College to the Tibetan community with a strong belief and dedication.

Director of Institute of Buddhist Dialectics (IBD), Geshe Kalsang Damdul and Principal of the Sarah College for Higher Tibetan Studies (CHTS) Passang Tsering were among the speakers. Students were awarded BA in History and advanced Diplomas, upon completion of their higher studies.

In his remarks preceding the bestowment, President Dr Lobsang Sangay praised the college for their efforts to make higher education a reality for Tibetan youth in exile, while providing equal opportunities for both men and women.

Remembering the life and legacy of the founder of the IBD late Geshe Lobsang Gyatso, Dr Sangay said that establishing the College by late director was one of his great achievements and it's important for us to remember the vision that he championed.

President Dr Sangay congratulated the merit holders and graduates for their achievements and appreciated their outstanding performance in the areas of: Buddhism, culture, language and literature. He urged the students to heed the advice of His Holiness the Dalai Lama and strive to become a resourceful person with both traditional and modern education.

President Dr Sangay heaped praises on the Institute for its decades-long service in imparting both Tibetan Buddhist traditions and modern education to Tibetan youth. He also mentioned the contribution and collaboration of the Institute in organising workshops and training for Tibetan civil servants, teachers and administrators.

President also thanked the members for their tireless work toward preserving and nurturing the Tibetan culture, literature and upholding the unique and rich Buddhist tradition.

In 2015, CHTS has 302 students annually, studying in a broad array of undergraduate and graduate-level degree and certificate programs. Administrating the College under the direction of the IBD, it is served by a total of 17 faculty members and 20 staff members.

For nearly five decades, hundreds of students have graduated from the Institute and its branch and are working in Tibetan society in various capacities, such as teachers, writers, journalists, translators, research scholars, lecturers, principals, translators, and government officials. About 20% of teachers serving in different Tibetan schools under Central Tibetan Administration are Sarah trained teachers, according to the Tibetan Department of Education.

The College is an advanced Tibetan studies college founded in 1991 by the late Gen Lobsang Gyatso under the guidance of His Holiness the Dalai Lama. The College is a branch of Institute of Buddhist Dialectics (IBD) based in McLeod Ganj, Dharamshala, India.