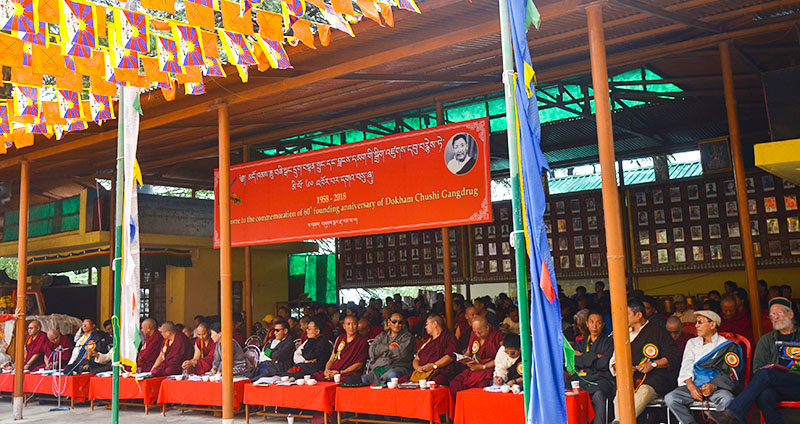 The event was attended by hundreds of Tibetans, including members of the exile Tibetan Parliament, paid respects to and remembered the achievement of the volunteer militia force and honored all the great people who have given up their lives for Tibet.

Remember and paying tribute to all those who have sacrificed their lives for Tibet nation’s freedom struggle, the Speaker of the Tibetan Parliament strongly praised organisation's achievements over the past six decades, especially for preservation of Tibetan language, culture,and identity and strengthening of the movement for Tibet's freedom, which to be the organization's top agenda.

"Chushi Gangdruk" is a Tibetan phrase meaning "land four rivers and six ranges," and refers to the geography of the traditional Tibetan regions of eastern Tibet. The group was founded to be a volunteer force to defend Tibet from the Chinese army and included Tibetans from those Tibetan regions, as well as from Central Tibet.

The organisation was the organized resistance movement inside Tibet against the Communist Chinese military forces. It was formally established on June 10 1958 and was responsible for providing safe passage to His Holiness the Dalai Lama into India in 1959. They regrouped later in Mustang Nepal, established a military base with American support and waged a guerrilla war against Chinese forces for 13 years but ultimately had to disband. However, the legacy of the organization has now been passed on to younger generations who continue to struggle and do their part in the Tibetan cause.