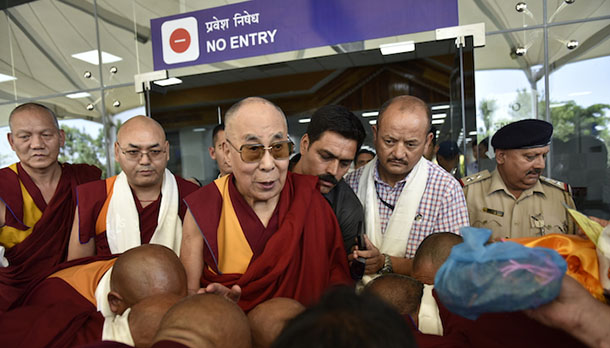 Dharamshala, India — “Normal, of course, a little bit tired, but otherwise normal,” said His Holiness the Dalai Lama when members of the media questioned him about his health at the Gaggal airport in Kangra district on Wednesday afternoon.

The spiritual leader of Tibet, arrived at his residence in Dharamshala, HP, India on May 20, 2018, after concluding his 11-day teaching tour of Baltic states including Lithuania and Latvia. He was received by the top officials of the CTA, TPiE and representatives of various Tibetan NGOs.

During his teachings to over 4,000 Baltic and Russian Buddhists in Riga, Latvia, His Holiness also met with a group of Tibetans who had come from several European countries to attend the teachings.

The Tibetan leader mentioned the importance of studying Buddhism and the key role understanding Tibetan has in this. He told them he felt the Tibetan Buddhist tradition would be of spiritual benefit to China in the future.

He also briefly alluded to his commitment to the Middle Way Approach—according to which Tibet would not seek independence, but remain within the People’s Republic of China—as part of a mutually beneficial solution.

His Holiness encouraged the Tibetans to be happy and to be proud of their heritage. He told the younger members of the group not to lose hope of one day returning to Tibet. In the meantime, he told them it was important to study modern subjects such as science and technology to be able to contribute to the future development of their homeland.

The spiritual leader conferred the Avalokiteshvara Empowerment on the final day of his teachings in Riga. He explained that the people of the Land of Snows have a special connection to Avalokiteshvara. His Holiness also conferred the permission to practise White Manjushri.

The Tibetan leader’s upcoming schedule includes a four-day teaching from September 4-7 at Tsuglagkhang on Buddhapalita’s Commentary on the Fundamental Wisdom of the Middle Way (drel-pa Buddhapalita). The teachings were requested by a group from Asia, including Indonesia, Korea, Malaysia, Singapore, Thailand and Vietnam.