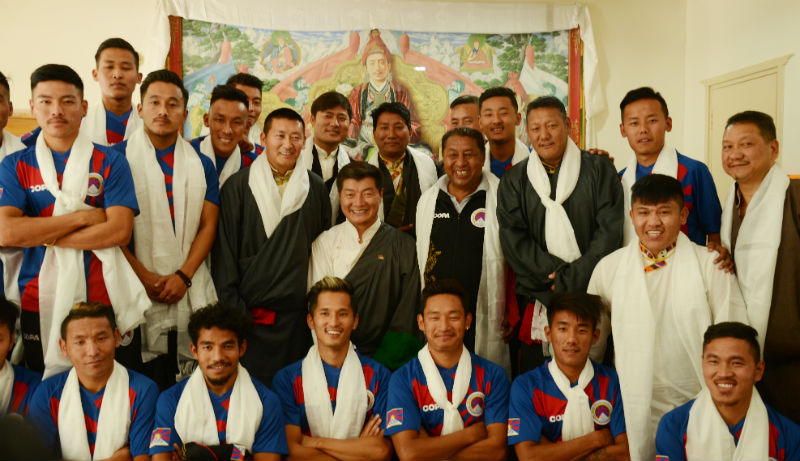 Tibet National Team with President Dr Lobsang Sangay at the press conference in Dharamshala, India, on 18 May 2018. Photo: TPI/Jamyang Dorjee

Just a day before their trip to London, the Tibetan National Sports Association (TNSA) held a press conference Friday in Dharamshala, India to announce the Tibet National Team’s participation in the upcoming CONIFA world cup 2018 in London next month.

President Dr Lobsang Sangay wished the team a successful tournament and said just the fact that we are participating in the tournament is a huge accomplishment for Tibet and the Tibetan people.

“It’s a moment of pride and happiness for all Tibetans as our national football team is going to participate in a global football tournament. If we go on to win it, it will be an even bigger achievement. Even if we can’t, our team’s participation will enthuse our brethren inside Tibet to see the Tibetan national team and flag among other nations of the world,” he said.

“TNSA has prepared strenuously over the last one year. From selecting players to raising funds for accommodation and travel of the team, it has come a long way and now our team is finally about to leave for the tournament in London,” he added.

“Our national team’s participation in the tournament sends a powerful message to everyone. First, it sends a message to younger Tibetans that we have the opportunity to compete on global platforms if we play well in our local tournaments.”

The Tibetan President also outlined the Kashag’s efforts to encourage a healthy lifestyle among the youth by providing funds to build playgrounds, open-air gyms and sports clubs in the settlements. “The Kashag has provided funds to each and every Tibetan settlement to build football grounds, basket ball grounds, open gyms, etc. Our aim is to encourage Tibetan youngsters to take part in sports and steer them away from other harmful habits like drug abuse, alcoholism, etc,” he explained.

Passang Dorjee, President of the TNSA thanked the Kashag for providing 15 Lakh rupees towards the team’s expenses, and the office of Tibet, London and the Bureau of His Holiness the Dalai Lama in Delhi for helping in processing the paper works. He told the members of the media that his team is leaving Saturday for the tournament in London to get used to the grounds and facilities in London, as well as to play a few friendly and exhibition matches before the actual tournament begins.

The CONIFA World Football Cup is the biggest and best-known football tournament of national football teams that do not enjoy FIFA membership. It is organised by Confederation of Independent Football Associations (CONIFA), the international governing body for Non-FIFA affiliated Associations for football.

At least 16 teams from 4 continents will be participating in the 2018 edition making it the biggest tournament ever played outside of FIFA. Teams include one from Oceania, one from North America, two each from Africa and Asia, and five from Europe. The rest are automatically qualified as host teams and reigning champions.

The Tibet National Football Team is officially qualified for the World Football Cup 2018 through a wild card ticket granted by CONIFA. The tournament will officially begin on 31 May 2018 and the final match is scheduled for 9 June 2018.