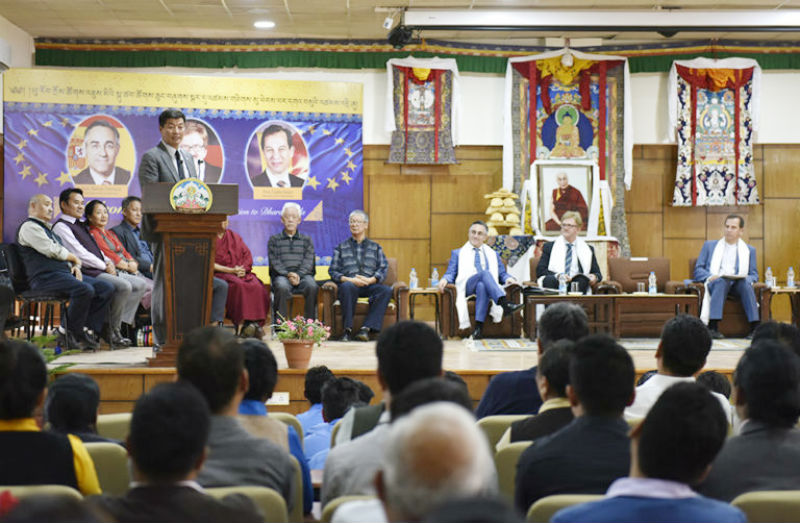 Dharamshala, India — 'Your presence here means a lot, sending a message of hope to Tibetans inside Tibet, under occupation, Tibetans are repressed, they are suffering and in prison and 152 Tibetans have committed self-immolation,' said President Dr Lobsang Sangay in his remarks, while welcoming the European Parliamentary delegation who is on a six-day visit to Dharamshala from Monday.

The Central Tibetan Administration (CTA) Monday held a felicitation ceremony in honour of a delegation comprising three members of the European Parliament, reached the headquarters of the Central Tibetan Administration (commonly known as Tibetan Government-in-Exile (TGIE) at Dharamshala in Himachal Pradesh, india on May 7, 2018 and received an audience with His Holiness the Dalai Lama at the latter’s residence, on May 9, 2018.

The delegation led by Member of the European Parliament (MEP) Thomas Mann comprised Csaba Sogor and Ramon Tremosa as well as Representative Tashi Phuntsok, Office of Tibet in Brussels. A large banner was installed on a wall to welcome the delegation which is in Dharamshala for week-long to hold meetings with top Tibetan officials.

"As far as parliamentary resolutions are concerned, the European Parliament has passed most resolutions on Tibet, perhaps ahead of United States also. For that, we are very grateful and we want to urge you to continue to pass more resolutions and extend your support for many years to come," President said.

Dr Sangay iterated His Holiness the Dalai Lama's staunch admiration for the spirit of European Union. "After Brexit, His Holiness came out and said that EU should keep going because it is such a beautiful example of war-torn countries, after years of fight and killings, coming together to form a union," he said.

"Hence His Holiness is the biggest admirer and advocate of EU when the EU is challenged from within and without", Dr. Sangay added, while mentioning that Central Tibetan Administration is encouraged by the parliamentary visit and the powerful voice it gave to the resilience of the people of Tibet.

"Your presence here means a lot. We are sending a message of hope to Tibetans inside Tibet. Tibet is under occupation. Tibetans are repressed, they are suffering and in prison and 152 Tibetans have committed self-immolation. They are hoping that someone will speak for them and stand for them. The fact that you flew from Europe to Dharamshala means a lot. It is a powerful message, a message of hope, justice, freedom and liberty," President Dr Sangay further noted.

The Tibetan President praised the MEPs for condemning China to criticize human rights violations in Tibet by passing resolutions on Tibet and strongly appealed the "European Parliament to officially support CTA's Middle Way Policy and dialogue between the representatives of His Holiness and China for peaceful resolution of the Tibet issue."

"So far, the White House is the only one that has supported the MWA policy of the Tibetan people. Hopefully, EU will follow suit and also support MWA and dialogue between envoys of Dalai Lama and Chinese representatives to solve the issue of Tibet peacefully so that Tibetans will be granted genuine autonomy and His Holiness the Dalai Lama can return to his rightful place in Lhasa, the capital city of Tibet".

According to the CTA official media, Dr Sangay also introduced "CTA's functionaries to the delegation, while hailing the Tibetan Administration as a thriving vibrant democracy in-exile with the highest efficiency, accountability and transparency."