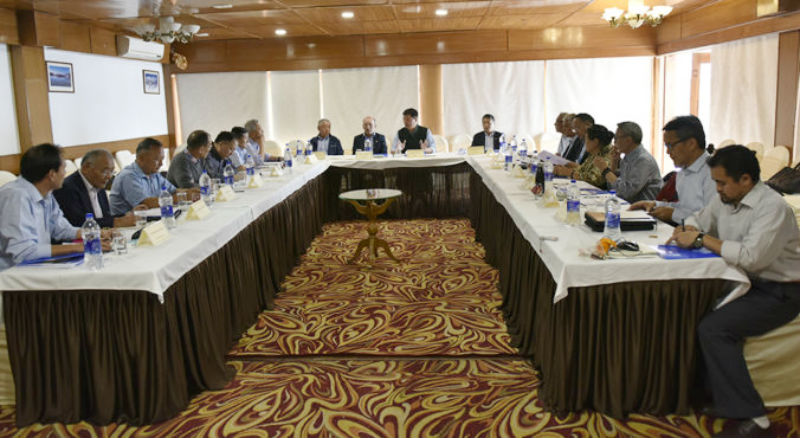 Dharamshala, India —The 30th meeting of the Task Force on Sino-Tibetan Dialogue concluded on Thursday in Dharamshala, with "a detailed discussion on the situation inside Tibet, the perceptible shifts in global political landscape and the overall prospects for the resumption of dialogue between Dharamshala and Beijing to resolve the issue of Tibet."

The three-day meeting had begun on Tuesday and was presided over by Dr Lobsang Sangay, president of the Central Tibet Administration, at Asia Health Resorts in Dharamshala, India. Nineteen members of the task force, include Representatives of His Holiness the Dalai lama around the world attended the meeting.

In his opening remarks, President Dr Lobsang Sangay spoke about "the rapidly developing international political scenario such as the unprecedented meeting of the leaders of South and North Korea, and expressed optimism that Tibet issue could also see positive outcomes in the future.”

According to CTA official media, President Dr Sangay opined that the next three-four years would be crucial for Tibet as it could determine the resumption of Sino-Tibetan dialogue or the return of His Holiness the Dalai Lama to Tibet.

Dr Sangay also expressed this opinion based on the assumption that the internal political situation inside China could turn volatile from 2021 due to the abolition of China’s presidential term limits and other factors such as upcoming fresh leaders who could pursue more hard line policies on the issue of Tibet.

During the meeting, the members discussed the recent developments in China post the 19th conference of the National People’s Congress.

"Presentation on developments in India-China, Australia-China, and Vatican-China relations as well as the US National Security Strategy and situation in Taiwan" were discussed at the meeting. It said that "The members also deliberated on how these developments might impact the efforts of Central Tibetan Administrations in resolving the long standing issue of Tibet."

The Task Force statement said that it held "a detailed discussion on the situation inside Tibet, the perceptible shifts in global political landscape and the overall prospects for the resumption of dialogue between Dharamshala and Beijing to resolve the protracted issue of Tibet."

The Sino-Tibetan Task Force was established in 1999 to recommend policy matters and strategies to find a peaceful and mutually acceptable negotiated resolution to the issue of Tibet. The last task force meeting was held in October 2017. Since 2002, nine rounds of formal dialogue has taken place between envoys of His Holiness the Dalai Lama and representatives of the Chinese government. The last round of dialogue took place in 2010.

The Middle-Way Approach is proposed by His Holiness the Dalai Lama to peacefully resolve the issue of Tibet and to bring about stability and co-existence between the Tibetan and Chinese peoples based on equality and mutual co-operation.

The Nobel Peace Prize laureate says he has pursued a "middle way" strategy in which he simply seeks "Genuine Autonomy" for the people of Tibet within China or within the framework of the Chinese constitution, rather than press for full independence.

The series of negotiations between envoys of His Holiness the Dalai Lama and Chinese government officials broke down in 2010, after Chinese authorities rejected a proposal for "genuine autonomy" presented to them. The envoys later expressed disappointment over China's rejection and they said current circumstances made substantive dialogue very difficult. However, the Central Tibetan Administration led by President Dr Lobsang Sangay says he will continue the "middle way" policy, which is considered a win-win proposition for both the Tibetans and the Chinese.

However, torture, arbitrary arrest and imprisonment, and government surveillance are still commonplace in Tibet. Chinese solders or intelligence agents reside in monasteries and that there is an extensive network of spies. A climate of fear pervades most parts of Tibet and religious figures are the primary focus of Chinese severe repression. Human Rights organizations around the world that have investigated the situation agree that freedom of religion is nonexistent in Tibet.

Tibet was invaded by the Communist regime in China, starting in 1949. Since that time, over 1.2 million out of 6 Tibetans died as a direct result of China's invasion and continued occupation of Tibet, over 6000 monasteries have been looted and destroyed— and acts of murder, rape, arbitrary imprisonment, torture, and cruel, inhuman and degrading treatment have been inflicted on the Tibetans inside Tibet. Beijing continues to call this a "peaceful liberation".