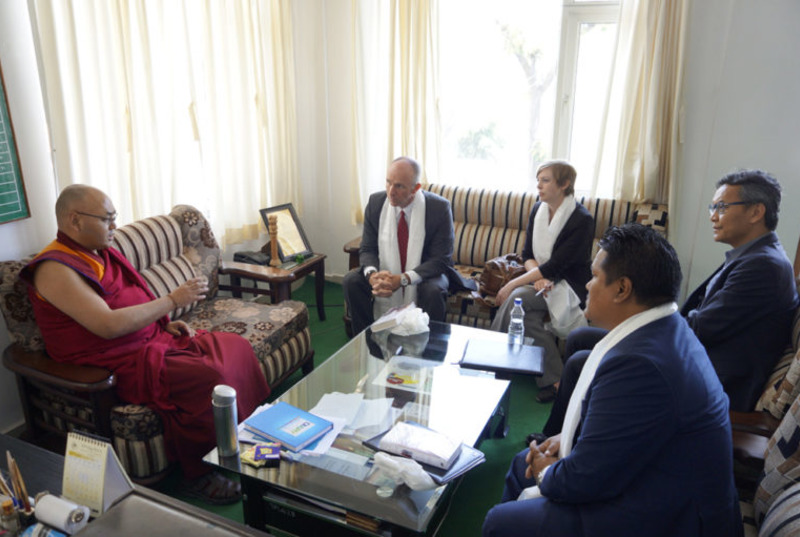 Speaker Khenpo Sonam Tenphel meets a delegation from the US State Department's Bureau of Population, Refugees, and Migration on April 26, 2018. Photo: CTA

Dharamshala — A delegation of the United States' State Department visited the Central Tibetan Administration in Dharamshala, meeting with Parliament in Exile Speaker Khenpo Sonam Tenphel, and solidifying its support of Tibetans.

The Speaker continued, “Our Parliament being established in exile is extraordinary in itself. It plays different roles. In particular, Tibetan Parliament liaise with the members of parliaments from different parts of the world and partakes in the political activities of advocating Tibet’s issue and Tibetan struggle movement all over the world. For instance, delegation of our parliament meets with members of parliament from different parts of the world and elucidate them on the Tibet’s issues. The parliamentarians also visit Tibetan settlements in India, Nepal and Bhutan periodically to assess grievances of the general Tibetan public and apprise the same to the concerned department under the Kashag thereafter."

Responding to a question about the issues faced in Tibetan settlements, the Speaker stated that there is a drop in the number of youth staying in the Tibetan settlements as well as Tibetan residents engaging in the agrarian activities, however, there is a steady progress in terms of education and health of the general Tibetan public.

"In early days of our exile, the literate Tibetans were mostly from the clergy class as they had formal monastic education and majority of the lay Tibetans were illiterate. However, the younger Tibetan generations now are mostly literate and brought up studying modern education. The pattern of migration of the Tibetan youths from the settlements to the nearby urban areas or overseas owes to the lack of economical sustenance and limited opportunities. So, lots of issues has been raised on how to reverse this kinds of migrations," he added.