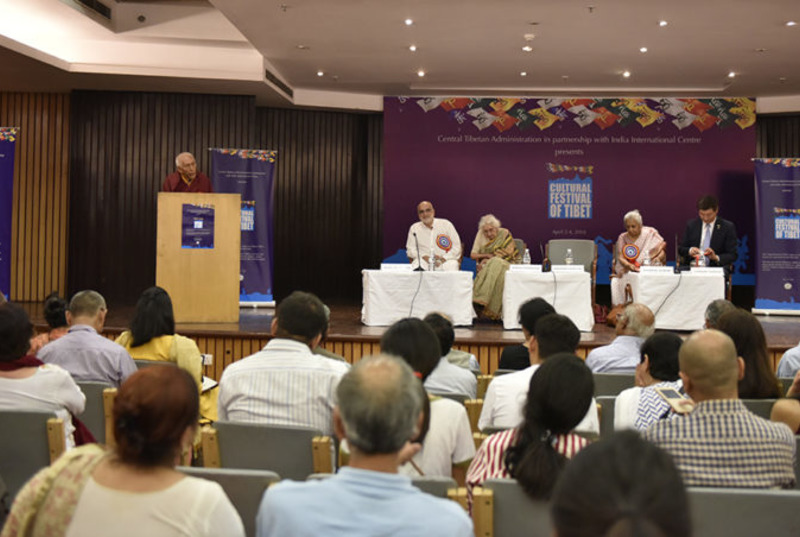 Dharamshala — "So from Korea to Doklam to Australia, China is directly or indirectly claiming territories as within its sphere of influence by employing singular versions of history, or inventing facts or what might be called ‘fake history’,” said Dr Madhuri S Sondhi, Director of the ML Sondhi Institute for Asia Pacific Affairs at a panel last week on ties between India and Tibet.

A panel of experts convened last week in Delhi to discuss 'India and Tibet: Ancient Ties and Current Bonds' as part of the Tibetan government's Thank You India campaign.

Moderator for the panel, Rajiv Mehrotra, Indian writer, television producer-director and Founder of Foundation of Universal Responsibility opened the panel discussion by looking at the current India and Tibet bond built on ancient tradition and said “this should really have been a Thank you Tibet and Thank you Tibetans initiative. Because at another conference, they celebrated the Tibetans as honored guests. But I think they are much more than that, they are extended family to us in India”.

“Tibetans are a very very small community in exile but the impact of their presence on our lives is a celebration. Thank you Tibet, Tibetans, thank you above all, His Holiness the Dalai Lama. Thank you above all to His Holiness the Dalai Lama, for who he is, who embodies the highest human aspiration that any human being can have and that he has been in our midst. I often think of what it must feel like to have been around when Jesus and Gandhi were alive. To share the same physical space and impact of who they were. So it has been a privilege to be alive in India at this time”.

Professor Samdong Rinpoche said in his opening remarks: “Ties and Bonds are translated in Hindi as Bandhan, implying bondage and obligation. In my opinion, India-Tibet relation is not an obligation. This relation is one of deep embedded friendship, love and brotherhood. Speaking in terms of current bilateral relations such as of politics, economy, trade and welfare and so on, it can be said that there existed no such relation between India and Tibet. Because any agreement of such would exist between equals.

“Since the beginning, India has been a guru (master) and Tibet its chela (disciple). His Holiness the Dalai Lama has often described our relationship to India as that of a guru and chela, and of refugee and refuge. Ever since the advent of Buddhism in Tibet during the lifetime of Shantarakshita and Kamalashila, the entire land of Tibet became the land of disciples of the great Indian masters,” Samdong Rinpoche said.

“In true service to the Indian masters, erudite Tibetan scholars have spent over 250 years in oral transmission and translation of the ancient Buddhist literature in the Tibetan language. They have written enormous commentaries on the Indian literature. This sharing of our civilizational culture and knowledge has continued until the end of the 12th century,” he added.

“On the basis of your ancient heritage I am confident you Indians have the potential to make a great contribution to the welfare of humanity,” he concluded.

Founding member of Tibet Swaraj Committee, Director of the ML Sondhi Institute for Asia Pacific Affairs, former Editor of Shakti, Dr Madhuri S Sondhi added her thoughts on the joint connection between India and Tibet, saying, “We see now that three generations of Tibetans have grown up in India, so that, to quote the late ML Sondhi, ‘the Indian joint commitment with the Tibetans is on a broader range of subjects than when they first took shelter on Indian soil: and these include Human Rights, International Peace, Buddhist Culture, Himalayan Ecology, River Waters, Disarmament and Confidence Building in Sino-Tibetan Relations. These are not always expressed in formal institutions and may have ups and downs depending on current developments but they are very much issues of common concern.

“Post-Tiananmen, the CCP has indoctrinated successive generations in a fierce, xenophobic and at times revanchist nationalism coupled with a successful mobilization of Chinese overseas. Several aspects of China’s narrative and actions are outside the rationale of the international system as we know it and initially gave rise to confusion and surprise. But now a discernible process of challenging the content and terminology of this Chinese self-presentation is emerging.

“In their report, Walker and Ludwig argue that the expansion and refinement of Chinese and Russian sharp power should prompt policymakers in the United States and other democracies to rethink the tools they use to respond. They contrast ‘sharp power’, which “pierces, penetrates, or perforates the political and information environments in the targeted countries,” with “soft power,” which harnesses the allure of culture and values to enhance a country’s strength. And democracies, they argue, must not just “inoculate themselves against malign authoritarian influence” but also “take a far more assertive posture on behalf of their own principles.”

“So from Korea to Doklam to Australia (though not yet so far as America or Greenland), China is directly or indirectly claiming territories as within its sphere of influence by employing singular versions of history, or inventing facts or what might be called ‘fake history’,” she added.

She concluded by suggesting that “it is important for Indian and Tibetan scholars along with their international counterparts to collaborate in understanding Chinese historiography and in reaffirming the international system.. Whichever way, the democratic world and China are clearly engaged in a contest of ideas as well as in a contest over territory and power. India and the Tibetan exiles have chosen multi-party democracy and pluralism as against one-party and one-man rule in China, and this common bond is going to be important in facing the ongoing and perhaps more bitter contests in the future. And the challenge not only to strategists and politicians but also to academics.”

President of Central Tibetan Administration, Dr Lobsang Sangay said, “Tibet and Tibet freedom struggle is the original ‘made in India’. If it succeeds, India is guru and Tibetans chela. We took the philosophy of Bharat and we practiced the philosophies and values of Bharat. Now if you want, Modi ji’s Made in India to succeed, you better support us,” he said.

“Now the challenge we are facing is also common. Xi Jinping in its Party Congress said ‘Socialism with Chinese characteristics in new era and One Belt One Road is our road’. The rise of China is a fundamental challenge to the civilisation, values, principles and philosophy of India and Tibet.

“Tibet was India’s great wall against China’s expansionism and once the great wall was lost, it opened road for further incursions. Mao Zedong has said if you occupy Tibet, you occupy ‘the palm with all its five fingers’ which are Sikkim, Ladakh, Nepal, Bhutan and Arunachal. Not only that, China has encircled India from Pakistan to Sri Lanka to Bangladesh to Burma and it all started with Tibet,” he added.

Expressing gratitude towards India, CTA President said, “No country has done more for the Tibetan people and country than the great country of India. Ancient civilization, culture and philosophy almost destroyed, has been revived in India. We are celebrating this.”