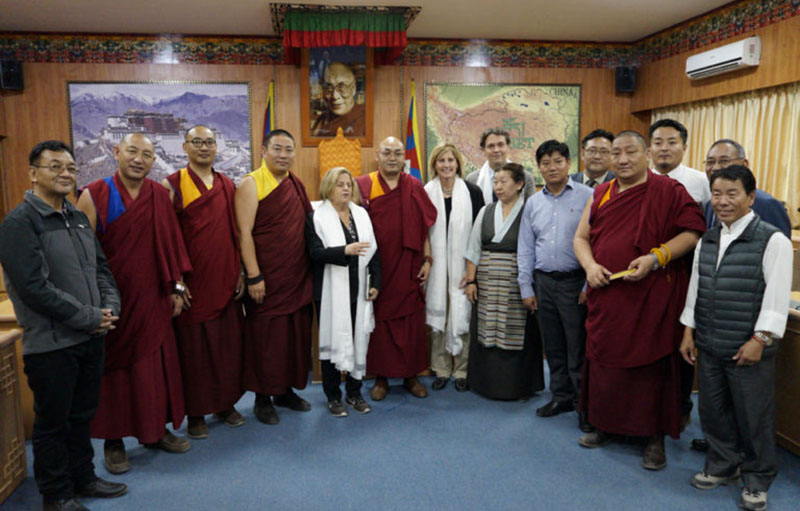 Dharamshala, India — The 'Standing Committee led by the Tibetan parliament Speaker on April 5, met with a U.S. Congressional delegation and expressed their gratitude for the people and the government of United States' wholehearted support for Tibet.

The delegation from the U.S. Congress is currently on a three-day visit to Dharamshala, India, the seat of the Central Tibetan Administration (CTA) to reiterate their strong support for Tibet and its people.

Welcoming the members of the U.S. Congress delegation to  the Tibetan Parliamentary Secretariat in Dharamsala, India, Speaker of the Tibetan Parliament-in-Exile Speaker, Khenpo Sonam Tenphel 'expressed his gratitude to the people and the government of United States for all the support rendered towards the cause of Tibet and its issue. '

The members of the Tibetan parliament 'Standing Committee' led by Speaker Tenphel, greeted them with the traditional white scarfs called a "khatak" that signifies an honored guest in Tibetan society.

The delegates from the U.S. Congress were taken to a guided tour to the parliamentary hall, where they were introduced to the Tibetan parliamentary sessions, its compositions and procedure.

During their meeting, the Speaker also highlighted 'briefly about the current situation inside Tibet as well as on the recent budget session of the Tibetan Parliament.'