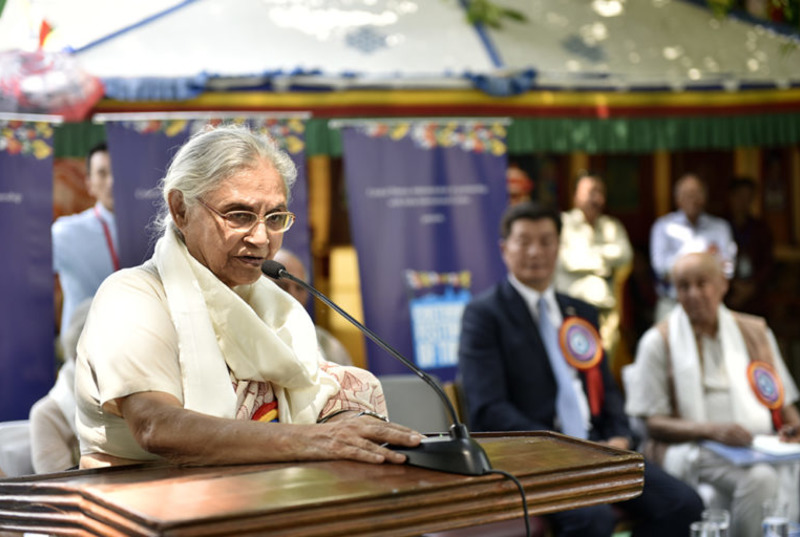 Dharamshala — "India and Tibet have a 60-years-old relationship which was started by Pandit Jawahar Lal Nehru ji. Now, this relationship has grown into brotherhood, we all are brothers and sisters and all of us feel the same. India is happy to have you and thank you for what you are," said former Chief Minister of Delhi Smt Sheila Dixit at the opening of Tibet's Culture Festival in Delhi.

The three-day Cultural Festival of Tibet opened in New Delhi on April 2 with an inaugural ceremony attended by former Chief Minister of Delhi, Smt Sheila Dixit.

Smt Sheila Dixit said, "I am very happy to be part of this attractive and beautiful occasion, it is an opportunity for all of us to be present here amongst these great artists. I am deeply honored to be part of this. India and Tibet have a 60-years-old relationship which was started by Pandit Jawahar Lal Nehru ji. Now, this relationship has grown into brotherhood, we all are brothers and sisters and all of us feel the same. India is happy to have you and thank you for what you are.

“There have been difficult times that you have gone through but India has always endeavored to make you feel at home and to think that India is yours as much as it is anybody else’s… You are saying thank you India, India thanks you for being what you are.”

President Dr Lobsang Sangay also spoke at the ceremony, saying, “We are happy and overwhelmed by the presence of Sheila Dixit at our culture festival. I would like to extend my heartfelt gratitude towards the people of India for accepting us with an open heart. The relationship between India and Tibet is of a teacher and a student. India has given us a chance to showcase our culture and tradition and who we are.”

Speaking on why Tibetans are marking their 60th year of exile as Gratitude year, Dr Sangay said, “On the one hand, 60 years has been long since the invasion and occupation of Tibet. 60 years of suffering, pain and destruction of Tibet’s environment, natural resources, water and glaciers. 60 years of destruction in the sense, 98 percent of monasteries and nunneries were destroyed in Tibet. 99.9 percent monks and nuns were disrobed. From that tragic situation, in the last 60 years of being an exile in India has been also the story of resilience and revival of the Tibetan people”.

“Right here in India, we rebuilt major monasteries that were destroyed in Tibet. We trained and taught thousands of Tibetan monks and nuns. Not just Tibetan Buddhism was revived in India but flourished in all Himalayan belt and all over the world where-ever His Holiness the Dalai Lama visited. Also in the last 60 years, Buddhism has come back to Tibet even though the policy of repression continues in Tibet. All these were made possible because of India; because we were given shelter here by this great country; an unparalleled support extended by all the prime ministers, governments and political parties in India,” he said, honoring the unconditional support of India.

The three-day festival will feature exhibits and events to present a thematic showcase of Tibetan art and cultural lifestyle.

The festival aims to celebrate Tibetan Culture and showcase all sides of Tibetan art, religion, lifestyle, medicine, history, literature, films and education activities. The day two of the festival will showcase documentary screening of various films.