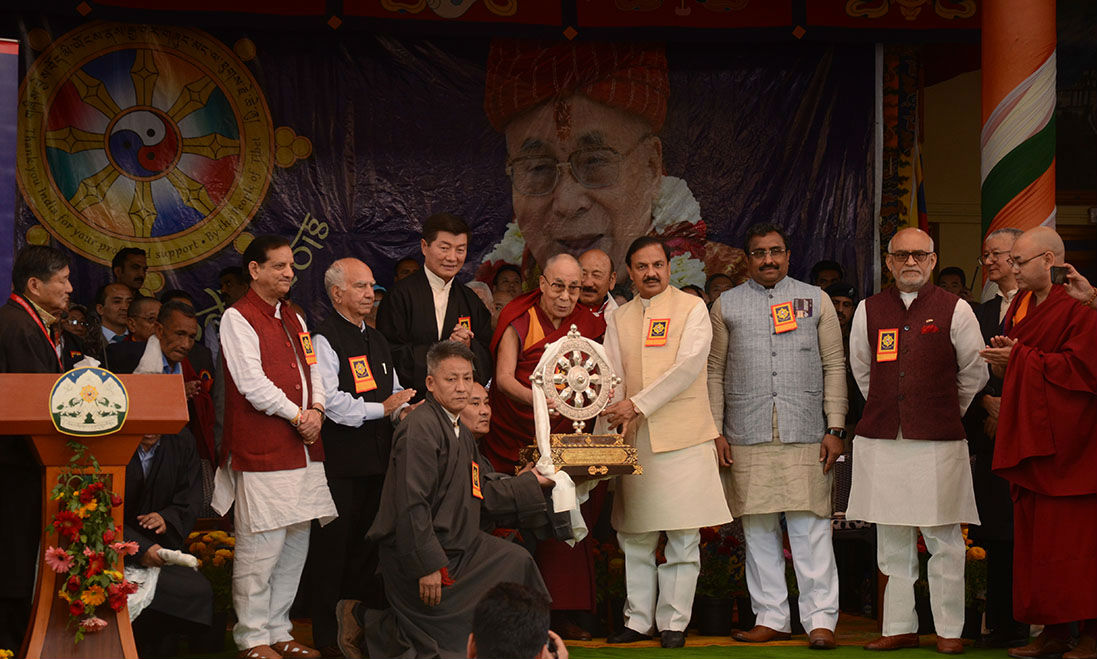 Dharamshala, India — His Holiness the Dalai Lama graced the ‘Thank You India’ event to mark 60 years since His Holiness’ arrival in exile India. A crowd of more than 4,000 people attended the historical event at the main Tibetan temple Dharamshala, india, on Saturday, March 31, 2018, organised by the Central Tibetan Administration.

According to the CTA, the event was attended by a host of Indian leaders from the ruling BJP as well as the opposition Congress including cabinet minister Dr Mahesh Sharma who is the Minister of State (Independent Charge) for Culture and Tourism and Civil Aviation.

Addressing the Thank You India event, His Holiness the Dalai Lama, while looking at the photos of his escape from Tibet, said that he is overcome with mixed emotions of sadness and happiness. “Under difficult circumstance, I have fled Tibet. It’s been a time of mixed feelings of both sadness and happiness. At the time, we had no idea what would happen in next 40 to 50 years. But today, we are commemorating 60 years in exile so now we could see to certain extent what would happen in the near future,” His Holiness said.

“India and Tibet share a bond of teacher and disciple. We the Tibetans call India the land of Noble ones. No other country is referred by such name by the Tibetans. So India is looked upon as land of reverence, respect and admiration so there is a very strong bond between Tibet and India,” the Nobel Peace Prize laureate said, adding: “As a result of the support and kindness of our host, the Government and People of India, now what we can see is that we can make some contribution from the Tibetan literature that has been passed to Tibet by the Indian scholars who visited Tibet and translated by numerous Tibetan scholars.”

“As Tibetan refugees in exile, we should not only focus on preserving our own culture and make our own living. In the last 60 years, we have seen a blessing in disguise that now we can contribute to the world at large from our own cultural tradition. So as refugees, we have to be practical and realistic. We cannot live like we use to in the past. Even from a Dharmic point of view, unfortunate circumstance can be turned into path of enlightenment,” His Holiness said.

“Although we have been in exile for the last 60 years, the Tibetans inside Tibet have kept up with a very strong spirit. Wherever we live around the world, Tibetans have really paid attention to our own culture and language in the 60 years. But we should not be complacent. So this is our responsibility. Let others notice the good things that we do and let them praise. But we need to see where we are making mistakes. I would like to urge to further carry on the good work and spirit,” His Holiness added.

Dr Mahesh Sharma, a Union minister from the government of India, spoke about His Holiness the Dalai Lama’s contribution to India and thanked him for spreading India’s message of peace and non violence throughout the world. “If we talk about relationships, or brotherhood, or teacher and disciple, then terms like ‘thank you’ are not needed. The Indo-Tibetan bond is thousands of years old, it cannot be quantified, nor is terms like ‘thank you’ needed in the current context,” he said.

“On the other hand, we should thank His Holiness the Dalai Lama for the harmonious blend of Indo-Tibetan religion and culture. Tibetans and Indians can now be described as a flower and its fragrance, which cannot be separated,” he said.

“I was just a child when Tibetans started coming into India. The Indian people welcomed them like family, sending a message of peace and love to the entire world. Since then, His Holiness the Dalai Lama has been promoting the same message of peace representing the values of India and Buddhism,” he added.

“We accept you as an integral part of India and at the same time, pray for your successful return to your homeland. The Indian people are committed to serve the Tibet cause led by His Holiness the Dalai Lama. Even our Prime Minister Narendra Modi remains concerned about the Tibetan people,” he said.

Shr Ram Madhav, general secretary of BJP, said that India has always welcomed different communities with open hands and an open heart. “We as a country have hosted many different people in history such as the Parsis, Jews, who came to India and found love, peace and shelter,” he said, added: “However (in the case of the Tibetan people) the real thanks should go to His Holiness the Dalai Lama. His efforts and the efforts of the older generation have ensured that the Tibetan people who came to India as refugees do not suffer the plight of other refugee communities,” he explained.

“From Jawaharlal Nehru to Prime Minister Modi, politically, we have followed the one China policy. Nevertheless, the relationship between India and Tibet is less political but more of spiritual, cultural and friendship. We met 1300 years ago at Nalanda and Vikramshila. After these universities were destroyed, Tibet has preserved this ancient Indian knowledge for thousands of years and now you are returning it to us. We should be thankful to you for preserving our knowledge system,” he said.

“We are bound by religion, culture, spirituality, knowledge. Therefore, you don’t need to thank India. Brothers don’t thank each other. In India we say we become each other in 6 months. You have been here for sixty years. We have become one people culturally. We understand your deep desire to go back to your motherland. We wish you all the luck. It took 2000 years form some people to get their homeland. I am certain it wont take that long for Tibet. But that flame should always remain for that to happen.”

Formr Chief Minister of Himachal Pradesh Shri Shanta Kumar who is the convenor of the All Party Indian Parliamentary Forum for Tibet, said that Tibet and India are two countries but one in spirit and soul. He thanked His Holiness the Dalai Lama for making Dharamshala world renowned for peace and compassion. He further called on China to allow the dignified return of His Holiness the Dalai Lama to Tibet. He said this will not only fulfill the aspiration of the Tibetan people but will also earn new respect for China as a country.

Shri R K Khrimey, Convener of the Bharat Tibbat Sahyog Manch, spoke about the Padyatra organised by Tibet supporters to mark the 60th year of His Holiness the Dalai Lama’s arrival in India. The padyatra began from Chuthangmo in Arunachal Pradesh and concluded at Tezpur, Assam.

President Dr Lobsang Sangay paid rich tributes to His Holiness the Dalai Lama and expressed the Tibetan people’s gratitude for his lifelong contribution for the Tibetan movement. Dr Sangay also thanked India for its consistent support on the issue of Tibet. “Today is not about how big the event is or who is here or who is not here. Today is a day of celebration and gratitude from the hearts and mind of the six million Tibetans,” he said.

“Today is the day to say thank you to this great country, incredible India. No other country has done more for Tibet than India. No people of a country has been so kind, generous as the Indian people is to Tibetans,” he said, added: “India was and has remained the greatest supporter of Tibet. And I hope that India retain its unparalleled support for Tibet until our aspirations are realised,” Dr Sangay added.

“I feel blessed once again as His Holiness touched me and bumped his head with my head,” said Naren Chandra Das, now 80, who escorted the Dalai Lama on his arrival in Arunachal Pradesh. Das said he was overwhelmed by the invitation he received to attend the event that marked the onset of a year-long ‘Thank You India’ campaign.

Speaker Khenpo Sonam Tenphel of the Tibetan Parliament delivered the statement of the Tibetan parliament. The introductory remarks of the event was delivered by Secretary Sonam Norbu Dagpo, Chair of the organising committee and the vote of thanks was delievred by Secretary Dhardon Sharling, Vice chair of the organising committee. The event also saw the screening of ‘Thank you India’ song, screening of ‘Chela’s Gift to its Guru’, release of a book on Kushok Bakula Rinpoche and cultural performances by artistes from the Tibetan Institute of Performing Arts.

After cancelling events in Delhi, the CTA has now started countrywide “Thank You India” programmes to mark the beginning of the 60th year of the Dalai Lama’s arrival in India. The event is organised by the CTA to mark His Holiness the Dalai Lama’s 60 years in exile and thank India for its kindness and assistance in these 60 years.