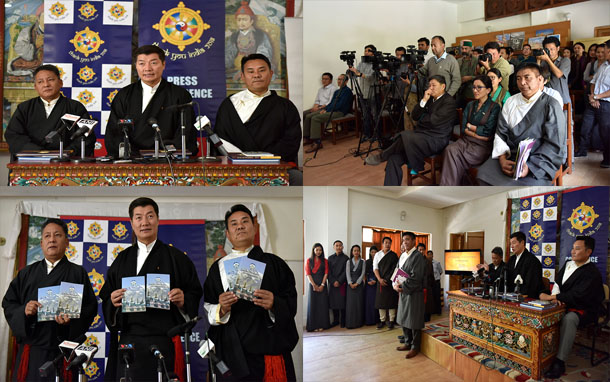 Dharamshala, India — “The government and people of India have done the most for Tibet. Every year, in all the formal and non-formal events, we Tibetans always say thank you India. I think it’s important that we should also demonstrate our gratitude in deeds,” President Dr Lobsang Sangay said at a press conference with his senior officials in Dharamshala, India, on Wednesday.

"The ‘Thank You India’ music video is performed and produced by artistes of the Tibetan Institute of Performing Arts (TIPA) to commemorate the 60th year of His Holiness the Dalai Lama’s arrival in India and thank India for their hospitality and assistance", said the CTA.

The press conference also saw the launch of three sets of books published by the Department of Information and International Relations (DIIR). The books are (1) India and Tibet: Ancient ties-Current bonds, (2) Indo-Tibetan Relations: Shared Heritage, Shared Culture in Tibetan & English and (3) a Photo Journal titled “Kalachakra 2017”.

Responding to questions at the press conference, CTA President Dr Lobsang Sangay explained the reasons for organising the ‘Thank You India 2018’, the issue surrounding the Indian government’s recent circular regarding the event and the yearlong events that has been lined up to mark the ‘Thank You India’ campaign.

“The government and people of India have done the most for Tibet. Every year, in all the formal and non-formal events, we Tibetans always say thank you India. I think it’s important that we should also demonstrate our gratitude in deeds,” he said.

“His Holiness the Dalai Lama calls himself a ‘son of India’. So, we should be saying thank you a lot. Even among friends, family or couples, it’s good to say thank you to your wife, husband, parents or friends from time to time. That will make our lives better. Moreover, our relationship with India is like parent and children. Therefore, we want to thank India,” he explained.

Regarding the circular issued by the Indian government on the event, Dr Sangay said that the CTA’s stand on India has always been consistent. “Whatever we do, we don’t want to cause inconvenience to our hosts or to the persons who want to meet us. They may have particular reasons as to why these coming months are sensitive. So, we completely understand and respect that. There is no disappointment at all but rather an understanding of the situation,” he said.

Dr Sangay also spoke about the yearlong events lined up as part of the campaign such as a mass tree plantation drive to a support a green India movement, participating in Yoga day events organised by Government of India, distribution of foods to the hungry and homeless, a mass cleanliness drive to observe the Indian government’s Swachh Bharat initiative and distribution of blankets and warm clothes to the homeless in winter.

“The Kalons as well as members of the Tibetan Parliament will visit the various states of India to meet local leaders to say thank you as part of this yearlong campaign,” President said.

Responding to a question about Indo-Tibetan relations and expectations from the Indian government, President Dr Sangay said that there is no change in India’s policy towards Tibet.

“We have been here for over 60 years. The last 60 years has been good and India has been a great host. Hence, our relationship has been like a parent and child. Sometimes, parents have certain situations, which the children have to understand. And we respect that. We have no complaints. Therefore, whatever happens in the next few months, it is for certain that nothing will take place that will be a drastic change from the last 60 years,” he said.

“For the last 60 years, the overall relationship has been very good. India has been a great host and that will remain so. About that, we are very confident,” he said.

Acknowledging the growing Chinese pressure on global leaders on the Tibet issue, Dr Sangay said: “Wherever I go, be it Europe, the US, the pressure is increasing.”

“At the same time, there is a buyer’s remorse happening. If you look at Australia, it has leaned towards Asia with China as the pivot a decade or so ago. Now, the ruling party in Australia has proposed a bill, which was passed by the parliament, to prevent foreign interference in domestic affairs and China is the prime target of the bill,” he added.

Dr Sangay also talked about China’s strategic encirclement of India known as ‘the string of pearls’ from Sri Lanka, Bhutan, Burma, and Pakistan to Nepal, Bangladesh, and Maldives etc. “The geopolitics of South Asia has been changed after the occupation of Tibet by China. If you want stability in South Asia, Tibet is the test for China and South Asia and the whole world,” he asserted, and declared that India should make Tibet a core issue for India.

Addressing the concerns borne out of the recent circular of the Indian government regarding the event, Dr Sangay said: “As I have stated in the parliament, I visited Delhi to meet the officials as soon as it happened.”

“During the meetings, we had an in-depth discussion. So, I can clearly say that there is no structural departure from past policy on Tibet or His Holiness the Dalai Lama as far as the Indian government is concerned,” he stated.

“We are confident that the official event on 31 March will be a grand success. So, there is no need to worry. India’s position on Tibet is unchanged,” he added.