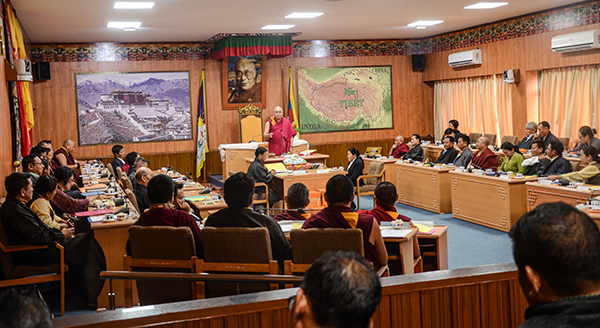 Dharamshala — The Tibetan Parliament in Exile began its fifth session of the 16th Parliament on March 14, allotted to set the budget for the financial year of 2017-2018.

Khenpo Sonam Tenphel, Speaker of the Tibetan Parliament, opened the session, saying “The Central Tibetan Administration has proposed the mutually-beneficial Middle Way Approach and has presented the proposal in both verbal and written documents to the Chinese representatives. However, the dialogue has been stalled for some time now since 2010,” he said.

“China is now one of the most important players in global politics. Therefore, it should respect the rights of the ethnic minorities in China including the Tibetan people. It should restore human and language rights in Tibet, allow freedom of the press and resume dialogue with Tibetan representatives in earnest,” he added.

“Since the occupation of Tibet by China, Tibetans have staged numerous peaceful protests against China in the last 60 years prominent among them were the 2008 pan-Tibet uprising and the wave of self-immolation protests that have swept Tibet since 2009,” he said.

“Most of the self-immolators have called for the return of His Holiness the Dalai Lama to Tibet and freedom for Tibetans. The Chinese government, instead of addressing their concerns, has resorted to distorting the truth and blaming the Tibetans themselves for creating trouble. Therefore, I urge China to assess the ground situation inside Tibet and fulfill the aspiration of His Holiness the Dalai Lama and address the grievances of the Tibetan people,” he said.

Speaker Khenpo Sonam Tenphel also highlighted the immense contribution of His Holiness the Dalai Lama to the Tibet cause and said that Tibetans should pay heed to his guidance to preserve the legacy of His Holiness the Dalai Lama for future generations. Speaker also emphasised Tibetan unity and said that it is the unity of the Tibetan people that will ultimately determine the success of the Tibetan movement.

The budget session of the parliament will discuss and approve the budget of the various de[departments and offices under the Central Tibetan Administration for the year 2017-18. The session will conclude on March 24, 2018.