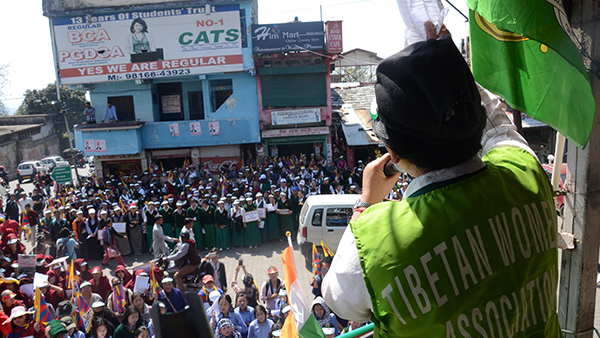 The Tibetan Women's Association called on the Chinese President Xi Jinping to resume talks with envoys of the Dalai Lama, to review the repressive policies in Tibet, which it said are forcing Tibetans to resort to self-immolation protests.

The organization took advantage of the occasion to condemn the destruction of Tibetan monastic institutions Larung Gar and Yarchen Gar, and called on the UN and the world leaders to take ‘necessary measures’ on the matter.

TWA also condemned China’s interference in the religious tradition of recognizing Tibetan Buddhist Lamas. It said, “being a Communist government with no adherence to any religious concept, China has neither the legitimacy nor the credibility in the spiritual matters since it considers religion as poison.”

“There are many challenges women face in today’s world. However, with the grace of His Holiness, we are provided equal opportunity in every field. Complementing the opportunity, Tibetan women have grabbed them to excel including the historic Geshema degree,” said Sonam Dolkar, former Principal academician, who attended the event as chief guest.

Tibetan President, Sikyong Dr Lobsang Sangay also spoke at an event marking the day, saying, “As a son of a mother, husband of a wife and father of a daughter, I am a deep believer in the equality and empowerment of women not just in the Tibetan community and but all over the world,” he began.

“The CTA rules and regulations and the Tibetan charter provides for equal opportunity for Tibetan women to seek employment, and receive equal salaries to all staff irrespective of gender. Even for the post of Sikyong or Member of Parliament, both men and women have an equal opportunity to contest elections and stand for the highest post in the CTA,” he said.

“Despite the economic and educational advancements that the Tibetan community has made since the early days of exile, there is still a distinction in the attitude towards women in the community. For instance, a woman would be subject to more severe backlash for a similar mistake that a man could commit,” he said.

“Therefore, it is in these areas that we would focus more to create an egalitarian community not just on the paper but also in our attitude,” he said.

Dr Sangay urged the public to participate and cooperate with the Tibetan administration in making the women empowerment policy a success. He emphasized that, without the participation of the public, the policy would be ineffective despite the best of intentions.