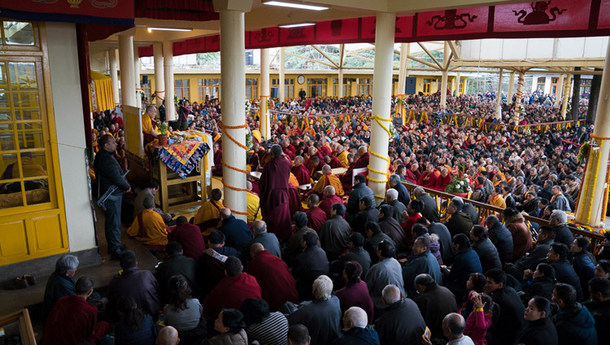 His Holiness the Dalai Lama addressing the crowd at the Main Tibetan Temple courtyard in Dharamsala, HP, India on March 2, 2018. Photo by Tenzin Choejor

Dharamshala, India — 'The blind loyalty based on regionalism and provinces is outdated and backward,' His Holiness the Dalai Lama said, adding: "The bond of unity that has shaped the Tibetan people for centuries is of crucial importance. We should maintain it as a sacred pledge.”

His Holiness the Dalai Lama gave a teaching on the Jataka Tales as part of the annual Chotrul Monlam prayer festival at the Main Tibetan Temple courtyard in Dharamshala, HP, India on March 2, 2018. The event was attended by over a thousand people, Tibetans and other devotees as well as several recently-arrived from Tibet.

“Today,” he began, “is the Day of Miracles, celebrated as part of the Great Prayer Festival that has been held in Lhasa for almost 600 years. It commemorates an occasion during the Buddha’s life when he defeated other ascetics in a display of miraculous feats," His Holiness told the crowd to overcome anger, fear and suspicion that makes us unhappy.

His Holiness emphasised the unity of the Tibetan people, particularly among the three traditional provinces as well as between the various sects of Tibetan Buddhism.

“In the past in Tibet, there were instances when monasteries fought each other based on sectarian divisions. However, now we are in the 21st century. Such sectarian violence and attitude is outdated and backward,” the Tibetan leader said, adding: “The same goes for blind loyalty based on regionalism and provinces. The bond of unity that has shaped the Tibetan people for centuries is of crucial importance. We should maintain it as a sacred pledge.”

“Even after the political fragmentation of Tibet, the Kangyur and Tengyur collections were a source of unity and harmony. They were found and revered in all three provinces of Tibet, as well as adjacent lands like Mongolia and Ladakh. Although I am not very highly educated, I can appreciate that there is knowledge in this literature that can contribute to a wider conversation.

"For example, the quantum physics view that things have no objective existence resonates with the views of the Mind Only School. The difference may be that in our tradition we try to use our understanding of how things are to transform the mind, which quantum physicists may not do."

“The study of logic prevailed in India and we have continued that tradition in Tibet,” His Holiness observed as he was nearing the end of his reading of the text. “The great texts of Indian Buddhist literature were translated into Tibetan, thereby enriching the Tibetan language, which is now the language in which Buddhist ideas can be most accurately expressed. The Buddhist tradition we have kept alive in Tibet is something like a treasure for the world; it’s something for us to be proud of.

His Holiness the Dalai Lama spoke about destructive emotions such as fear, anger and suspicion, and how to tackle these emotions through love and compassion. His Holiness said that humans, swayed by such destructive emotions, create problems and resort to unthinkable violence on each other by discriminating on account of the minor differences that afflict us.

“However, these differences are secondary,” he reminded. “At the level of our basic humanness, there is no source of conflict. Basic human nature is compassion. This is logical because we were born from our mother and were nurtured by her affection and care,” His Holiness explained.
“Gods or human beings, we all want to be happy and the root of happiness is in the mind. Liberation may take some time, but we can all find peace of mind if we pay attention to it here and now. Even animals, when they are not in danger, remain relaxed and at peace. What makes us upset is anger, fear and suspicion. It’s the unruliness of our minds that makes us unhappy.

"The ancient Indian traditions saw dealing with mental afflictions as more important than cultivating sensory pleasure. The Buddhas don’t wash away misdeeds and mental afflictions with water, they show us how to understand reality as it really is—that is how we can overcome them.