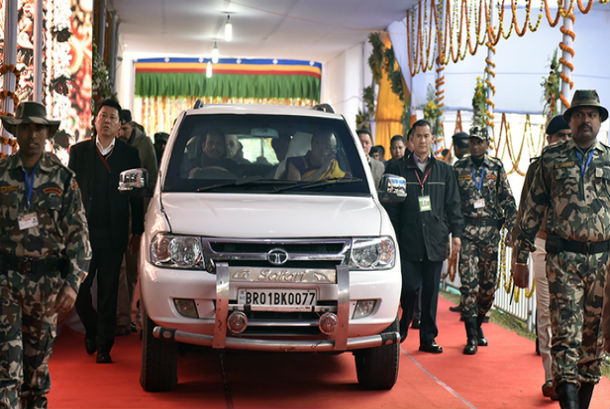 Security was intensfied in Bodhgaya, Bihar State of India, after a low-intensity bomb exploded and two live ones were detected on Friday. Photo: CTA/DIIR

Both Gaya, India — After detecting two bombs in Bodh Gaya pilgrimage centre where His Holiness the Dalai Lama is currently giving teachings, the Secretary of Department of Security of the Central Tibetan Administration (CTA) appealed the thousands of devotees to remain calm but cautioned them against touching any unidentifiable and suspicious objects.

"After a low-intensity bomb exploded just hours after His Holiness the Dalai Lama finished a sermon on Friday night," several media reported. The media reports say: Two crude live bombs were recovered near the Mahabodhi temple in Bihar's Bodh Gaya district, Bihar State in East India where the spiritual leader of Tibet His Holiness the Dalai Lama is camping, prompting authorities to heighten security. "An NIA team was at the site on Saturday to probe the incident.The bombs were found on Friday night," the indian State police said.

Speaking to the CTA official media, the CTA security department Secretary, Phasur Wangchuk said he met with the Deputy Inspector General of Police (DIG) and Senior Superintendent of Police (SSP) of Gaya district of Bihar State, who he said are working round the clock on this matter.

Secretary Wangchuk also told the official media that "the matter is under investigation by National Investigation Agency (NIA) and until proven, we can rule out any cases of threat to the security of His Holiness the Dalai Lama."

He said that "there is no need for the public to panic since the intelligence unit and police force of Bihar state have been on the qui vive and have provided the highest security apparatus ever since His Holiness arrived in Bodh Gaya in early January. Thanks to the intelligence, vigilance and coperation of the Bihar police, the bombs have been detected on time".

"What is more important is that the devotees in Bodh Gaya should be cautious of any unidentifiable and suspicious objects they see or get hold of. In case they do they should immediately report to the police or any staff of Department of Security," Wangchuk added.

According to district officials, a low intensity bomb blast had taken place near the site where the two crude live bombs were recovered on Friday night. Police denied media reports that claimed the bombs were found inside the revered Mahabodhi temple. "The explosive materials were found in the vicinity of the Kalachakra ground near the temple and kept far away from the temple," Inspector General of Police, Patna Zone, N.H. Khan said.A senior police official in Bodh Gaya said three suspected persons have been found roaming in Bodh Gaya.Police will identify them soon, he said.

The NIA team is to defuse the two crude bombs, police said."A team of NIA reached Bodh Gaya and visited the Mahabodhi temple to probe the incident," a district police official said.A forensic team from Patna was also in Bodh Gaya to investigate the matter. "We have given all the information to the NIA team. And if it requires more information, the state police will provide it, "a senior police officer camping in Bodh Gaya said.

Security of foreign monasteries and other sensitive places has also been beefed up and additional security forces deployed. Thousands devotees, including Hollywood star Richard Gere, and hundreds of foreign tourists have been staying in Bodh Gaya, where it is peak tourist season now. In 2013, a series of bombs exploded at Bodh Gaya's Mahabodhi temple in which two Buddhist monks were injured.