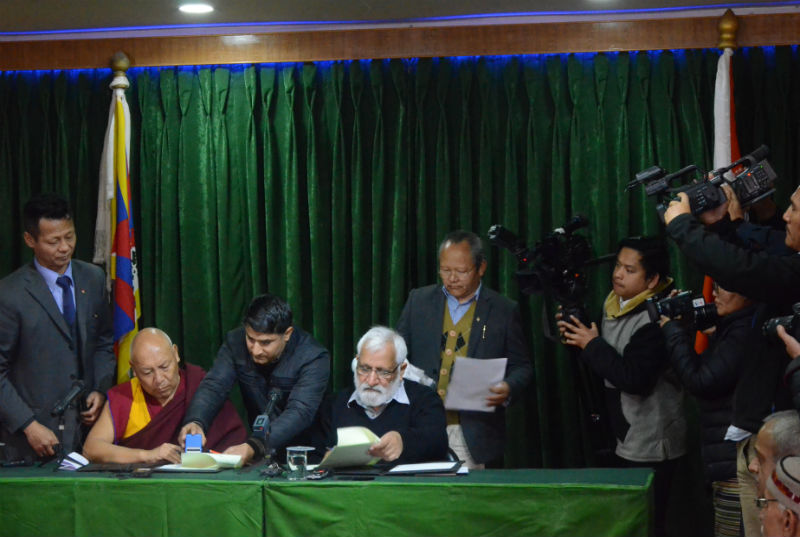 Signing the Memorandum of Understanding between LTWA and Central University of Himachal Pradesh in Dharamshala, India, on January 17, 2018. Photo: TPI/Yeshe Choesang

Dharamshala, India — A Memorandum of Understanding (MoU) was signed between the Library of Tibetan Works and Archives (LTWA) and Central University of Himachal Pradesh (CUHP), on Wednesday, in Dharamshala, India.

The Indian delegation led by Prof Kuldip Chand Agnohotri, Vice-Chancellor of CUHP, was welcomed by Geshe Lhakdor, Director of the LTWA, at the partnership signing ceremony in the LTWA Conference Hall in Dharamshala, India, on January 17, 2018.

The signing ceremony of the MoU to foster academic exchange between the institutes, was witnessed by Brig Jagdish Chand Rangra, the Registrar of CUHP and Ngawang Yeshi, the General Secretary of LTWA amidst officials and scholars from both the institutes.

Under the agreement, both sides have agreed to establish and enhance educational links between the two institutions through educational and academic exchanges.

"The MoU is to promote and foster exchange programs, course, seminars, internships and other activities, and to develop and bring about educational cooperation, in matters of reciprocal interest of both signatory parties," LTWA Director Geshe Lhakdor said during the ceremony held in Dharamshala.

The MoU also provides them with a unique opportunity to develop joint programs and collaborative research projects, devised for the needs of the two institutions; developing language and culture courses together with enterprise education, led by academics and researchers.

"I am very much interested in promoting Tibetan Buddhism, raising cultural awareness and imparting Tibetan values and freedom struggle to India, specially to the general public through Hindi language to express our profound gratitude to India," he said while speaking briefly on the MoU.

The LTWA, founded in 1970, is one of the premier institutes in the world specialising in Buddhist and Tibetan studies, providing a comprehensive resources and attracting increasing number of scholars, researchers, students and visitors from across the globe. In 1991, the institute was recognised as Centre for Tibetan Studies by Himachal Pradesh University, Govt. of H.P. Five years later the Tibetan Parliament in-Exile accorded the LTWA the combined status of National Library, National Museum and National Archives. In 2006, the National Manuscripts Mission, an initiative of the Government of India, appointed the institute as one of the National Manuscripts Resource Centres.