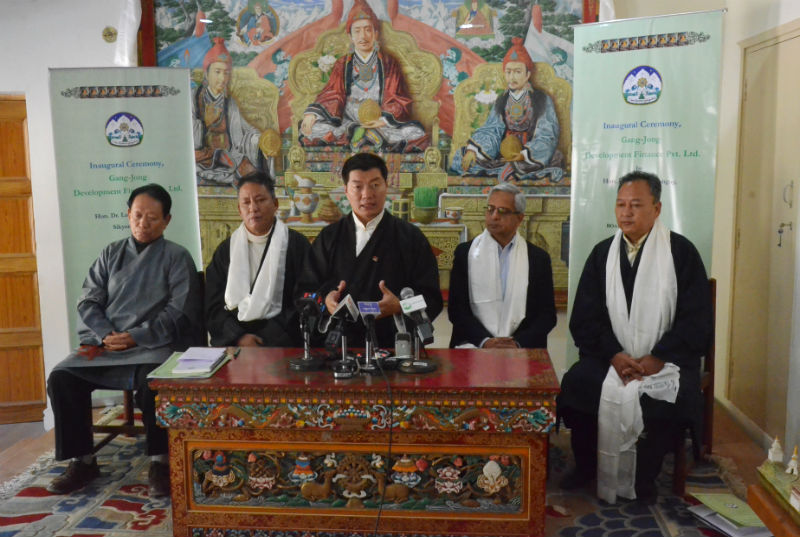 The inaugural press conference was attended by the three Board of Directors of the company; Finance minister Karma Yeshi, Chief Planning Officer Dr Kunchok Tsundue and MFin expert Alok Prasad. The press conference held at the Kashag building that lasted more than a half hour and covered a wide range of issues related to the new initiative.

Addressing the press conference, President Dr Lobsang Sangay said the Gangjong Development Finance Pvt. Ltd. is the culmination of a series of deliberations by successive Kashags over the need of a financial corporation in the Tibetan community. He said this initiative is part of the Kashag’s 5/50 vision and the principle of self-reliance, one of the three guiding principles of the Kashag.

“This is one of the most strategic programmes of CTA conceived and designed to drive forward the Kashag’s 5/50 policy addressing the critical need of financial literacy and inclusion services for Tibetans in general and Tibetan enterprises and start-ups in particular,” he said.

“Under this initiative, we have already rolled out a 100-million rupees loan scheme for Tibetan hosiery and sweater traders at a relatively low interest rate of 3%. The scheme was highly successful with at least 90% of the loans already recovered,” he added.

“With the success of the sweater seller loan scheme, we are now planning to expand the next scheme to 200 million rupees covering not just Tibetan sweater sellers but also Tibetan-owned micro, small and medium enterprises (MSME), and education loans,” Dr Sangay explained.

“The formal registration of the Gangjong Development Finance Pvt. Ltd is only the first step. Our hope is that it will become a normal commercial bank after several years,” he said.

Finance Kalon Karma Yeshi said that the most important objective of the company is to strengthen Tibetan economy and transform it into an economically self-reliant community, eradicating the dependence syndrome prevalent among many.

He praised the success of the previous loan scheme, saying, “When we issued the loans to Tibetan hosiery and sweater traders, we did not ask for any collateral from the applicants. Mutual trust was the only collateral. 90% of those loans have already been recovered,” adding that about 40% of the loans were given to women-led enterprises.