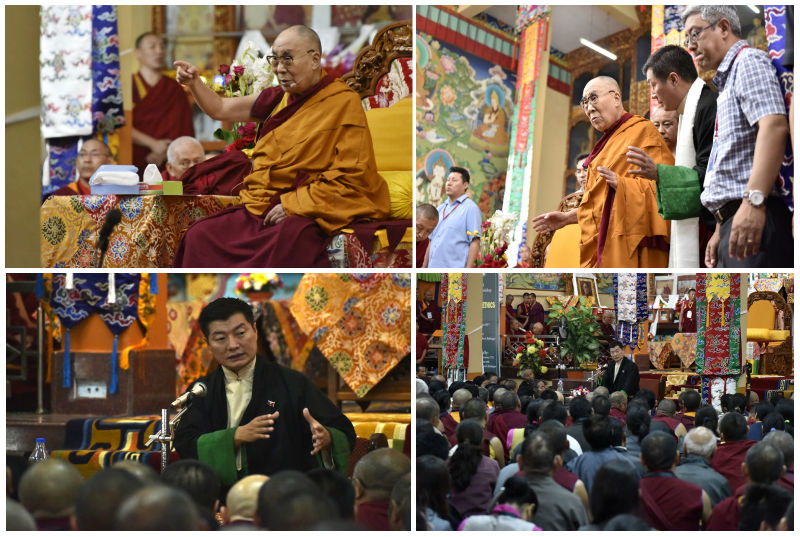 His Holiness the Dalai Lama and President Dr Lobsang Sangay, Central Tibetan Administration arrives at the Sera Lachi Assembly hall to meet the Tibetan pilgrims from Tibet and participants of the workshop on Secular ethics. Photo: DIIR /Tenzin Phende

Bylakuppe, India — "What important is that all three provinces of Tibet remain united, standing together in solidarity, His Holiness the Dalai Lama made this remark while addressing a large crowd gathering to listen him in the Sera Lachi Assembly Hall in Bylakuppe, Karnataka, India on December 22, 2017.

His comments came during an audience to new arrivals from Tibet and a group of Tibetan teachers gathered for Secular ethics workshop on Friday morning, according to a post on the CTA's official website.

"Tibetans in Tibet are the real masters of the country. Despite facing immense hardship, you have kept your spirits up. In 1959, the whole of Tibet was thrown into turmoil. There is a story that after the bombardment of Lhasa, Mao Zedong asked what happened to the Dalai Lama. When he heard that I had escaped to India, he is said to have replied, 'Then we've lost.'"

"The Chinese authorities thought the issue of Tibet would simply fade away, but even after 58 years it hasn't. In 1959, many countries had no idea about Tibet; they do now," His Holiness said, urging them to uphold the spirit.

"What is important," he said, "is that all three provinces of Tibet remain united, standing together in solidarity," His Holiness told the gathering.

"Tibetans should pride themselves of its thousand millennium old cultural heritage, rooted in the profound Nalanda teachings."

"We started appealing to the UN late 1959, but, as Pandit Nehru advised me, the USA will not go to war with China over Tibet. We concluded that eventually we would have to deal with the Chinese government. Until now the Chinese policy has been to denigrate the Tibetan people and their culture, nevertheless we remain hopeful of being able to preserve our culture and values within the People's Republic of China" he added.

His Holiness briefly explained about Middle way approach and its appreciation from Chinese intellects.

according to the CTA's official website. President Dr Lobsang Sangay, Central Tibetan Administration also addressed the new arrivals and the participants of the workshop on Secular ethics.

"We are seeking genuine autonomy for Tibet through non-violence and Chinese government can't say no to this as it does not contradict China's sovereignty and One China Policy," he said.

Enumerating the practicality of Middle Way Approach, under the prevailing situation inside Tibet and exile, Dr Sangay highlighted the widespread support and appreciation expressed by world leaders for the policy envisioned by His Holiness the Dalai Lama.

He further said, "Tibetan in exile practice full democracy rather than Chinese communist party of holding power by few people. Many of high-level authorities are mostly Chinese. So we seek to genuine autonomy, which is within framework of Peoples Republic of China's constitution."

President Dr Sangay urged people to invest in education rather than wasting money on luxury. "Since 2011, Kashag has given top priority to education and will continue to do so."

Towards the end, he urged for the Tibetans to stay united. "Keeping differences aside, if we all work together, the dreams and the aspirations of the Tibetan people in Tibet and in exile will be fulfilled," the President said.