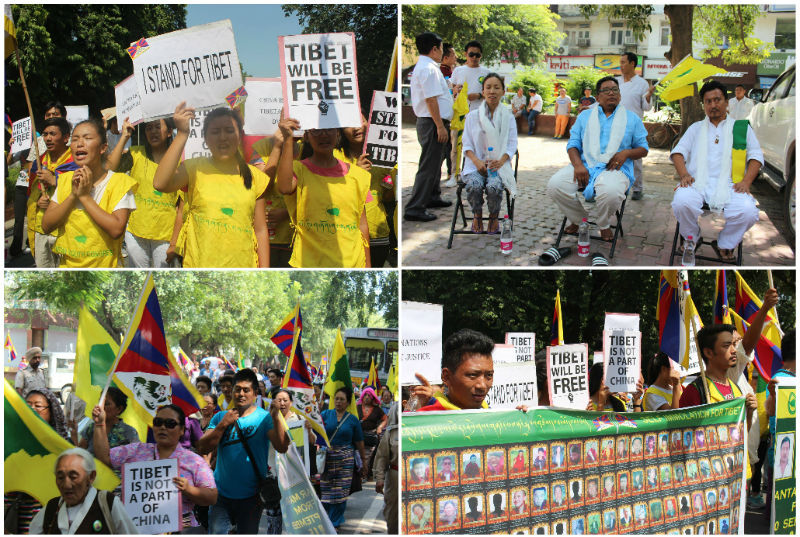 New Delhi — "We are willing to die for Tibet," says Tamdin Hrichoe one of the participants of the hunger strike organised by Tibetan Youth Congress (TYC), largest Tibetan NGO in exile working for the freedom and independence of the Tibetan people.

Hundreds of TYC members and Tibetan supporters gathered for a "Peace March" followed by a protest at the United Nations in Delhi on Monday September 28.

TYC has initiated an "Indefinite Hunger Strike" for Tibet at Jantar Mantar in Delhi from September 10. The group said that "this hunger strike is aimed to raise awareness about the critical situation inside Tibet, pay respect to the self-immolations for Tibet and show solidarity with Tibetans inside Tibet."

With a set of five demands to the UN, the Indefinite Hunger Strike by three TYC Executive members is in its 19th day on Monday.

"143 Tibetans have self-immolated inside Tibet since 2009 protesting China's hardline policies. Tibet continues to burn," it said in a statement.

The organiser also said that "the health of the three hunger strikers are deteriorating day by day but their spirit is high and their will to continue until a response from the UN is given is firm."

"We are willing to die for Tibet," says Tamdin Hrichoe one of the participants of the hunger strike.

TYC calls upon the UN to meet the following demands:
1. Urge the United Nations to raise the issue of Tibet at its General Assembly and Human Rights Council Session
2. Urge China to address the demands of the Self Immolations in Tibet
3. Urge China to give evidence that the 11th Panchen Lama Gendun Choekyi Nyima is alive
4. Send a fact-finding UN delegation to assess the current critical situation in Tibet
5. Urge China to release all political prisoners

It said that this peace march is aimed at putting strong pressure on the UN to stand up for Tibet and respond to their demands.

"The Tibetan issue cannot be ignored. UN, governments and leaders of the world have a responsibility to stand up and speak strongly for those oppressed," said TYC President Tenzing Jigme.