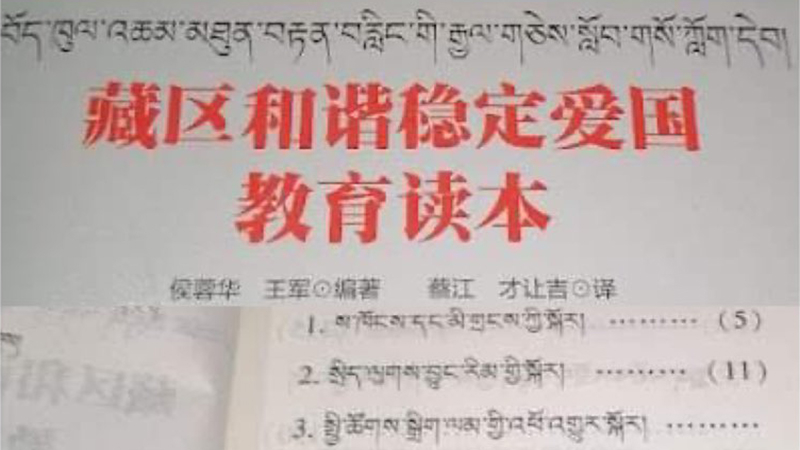 Dharamshala – Chinese authorities in Tibet published a political patriotic re-education book for Tibetans, in particular for the monks and nuns in eastern Tibet, to propagate about the development of Tibetan regions and to educate them the patriotic education, in an effort to put an end to future uprisings.

Since 2008, Tibetans in three provinces of Tibet have been protesting against China's harsh laws and repressive policies in Tibet. The protesters demand independence for Tibet and the return of His Holiness the Dalai Lama, Tibet's exiled spiritual leader. However, the Chinese government has suppressed the uprisings by killing, arresting and sentencing Tibetans without addressing their real demands.

The Chinese authorities use various means to prevent protests against Chinese government, including arresting Tibetans, torturing them and sentencing them to years in prison, even if they have demonstrated peacefully against the Chinese government and shouted slogans in support of their demands, warning their family members and society about the outcome of the protests and providing information outside Tibet, educating people about patriotism for China, the development of the Tibetan areas and the history of the political system, on the change of social rules.

According to the Rights Defense Network Information Center, the Chinese Communist Party has drafted "Readings on Harmonious and Stable Patriotic Education in Tibetan Areas" since 2015, in order to re-educate Tibetans after the outbreak of protests in the eastern Tibetan areas since 2008.

‘Chinese authorities have been preparing a book on patriotic education for harmony and stability in Tibetan areas since 2015 to re-educate monks, nuns, farmers and herdsmen in Tibetan areas of Sichuan,’ the report stated.

According to the source, the book has been reprinted since 2015 and gives patriotic re-education to monks and nuns in monasteries and to lay people by summoning meetings in Tibetan areas. But this re-education campaign could not stop Tibetans from protesting against China's unjust treatment and repressive policies, so the Chinese authorities have extended the re-education programme.